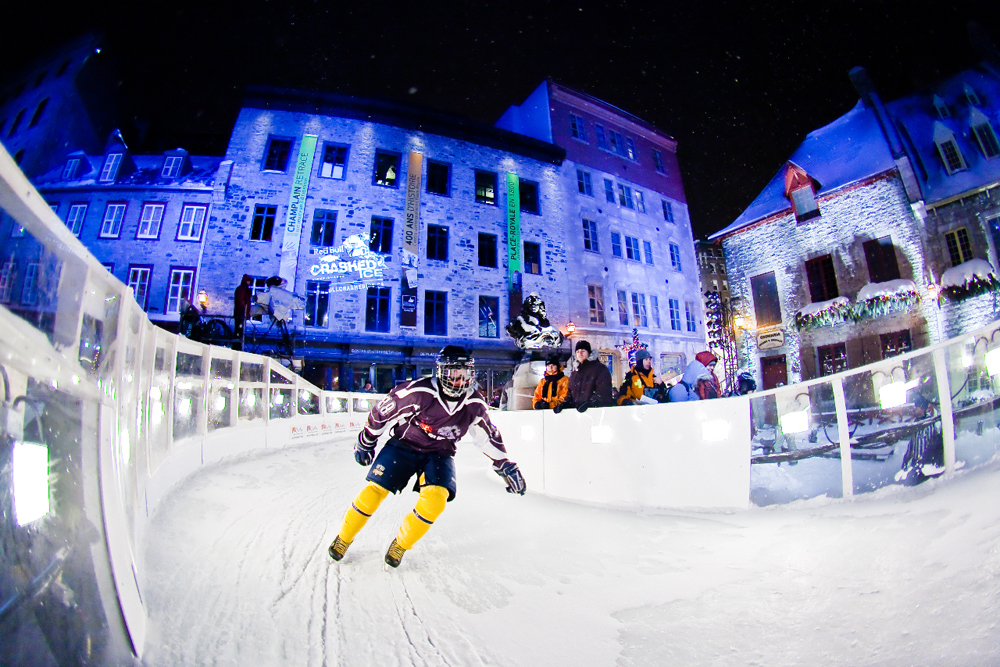 Red Bull Crashed Ice is one of the most amazing events you’ll ever witness. A combination of hockey, downhill skiing and boardercross, daring ice skaters hurl themselves down a 550 meter long ice track, coiling through a challenging sequence of razor-sharp turns, vertical drops, and jumps, and all in an historic urban setting at incredible speeds!

Described as “the most entertaining stretch of ice ever touched by a hockey blade,” this fourth edition of Red Bull Crashed Ice took place in the historic district of Quebec City, Canada. The race began under the Château Frontenac and finished by the Saint Lawrence River, some 90,000 fans gathered to cheer on the racers as they skated down the urban ice track at 50 km/hr.

Martin MAC luminaires – MAC 2000 Washes™ and MAC 600™ washlights supplied by Solotech through Martin Canada - were used to light some of the oldest architecture in North America, as well as the crowd. Lighting design was by Hubert Gagnon, visual designer at company Blackout Design.

Produced by company Gestev for Red Bull, the event was broadcast worldwide on television and the Internet. Because of that, says Gagnon, the track, crowd and architecture needed to be well lit. “The main thing on this event was to light the environment around the track without hiding any of the interesting background for TV,” Gagnon commented. “There were 35 cameras and they showed practically every angle of the city, which became their set.”

Gagnon chose Martin gear because of “the incredible resistance to extreme situations and weather,” he says. “Their reliability makes me fearless on a gig like this.”

Gagnon used 72 MAC 2000 Washes and 8 MAC 600 washlights to light the event. “The powerful strength of the MAC 2000 Wash equipped with the PC lens makes them one of my best tools,” he says. “On this event, the job I had to do with the MAC 2000 Wash was simple but important. They were the keylight for the audience with others used to saturate buildings.

“The main feature of the fixture is the enormous amount of light but I really appreciate the CMY color system that enabled me to go from deep color to pastel correction color. The size of the fixture is really important for me as well because I didn't want to build a multitude of oversized scaffolds that would have hid the beautiful ancestral architecture of the city,” Gagnon stated.

According to Gagnon, the Martin gear endured three chilly weeks outdoors without any problems.