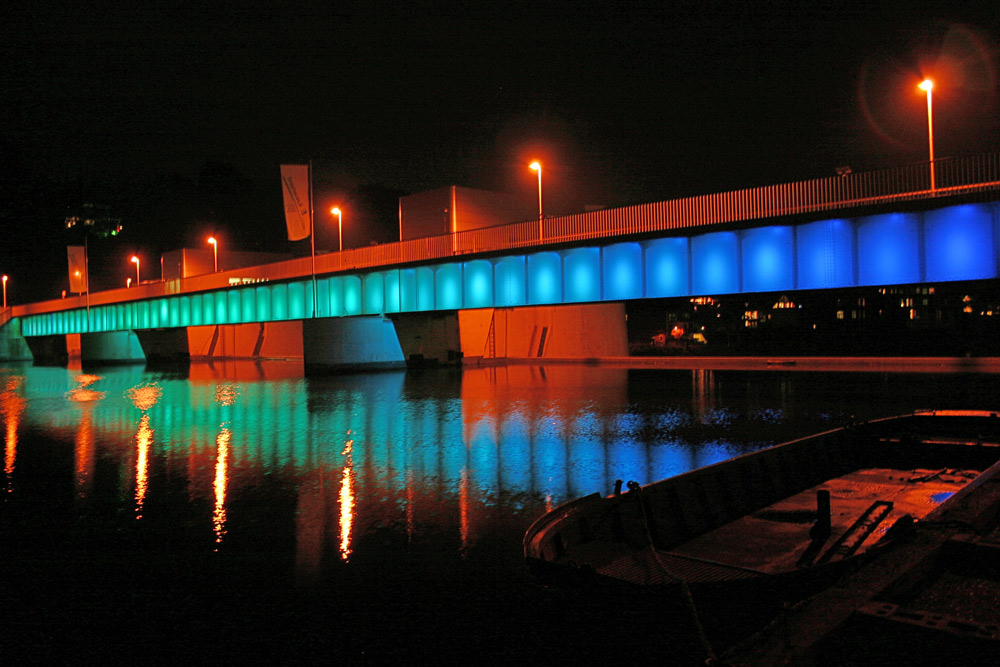 The face of Germany’s Ruhr district has changed in recent decades. The new face that is most notably stripping away old ways of thinking is being showcased as part of Ruhr.2010 with Essen as Europe’s Capital of Culture in an experimental symbiosis of art, energy and science.

Lake Baldeney is the location for “Ruhr Atoll” – an installation that serves as a platform for art and culture in public spaces across the Ruhr. It truly lives up to the Art & Energy slogan, since energy plays a key role in the creation and utilization, as well as in the artistic design, of the Atoll.

The presentation of a weir (water control) that has been completely rebuilt is integrated seamlessly into this concept, with the facades of its bridges appearing as an explosion of color across the lake – testimony to the region’s centuries of construction work and architecture.

The idea for a visual display of an arc of light spanning the lake took shape two years ago, with the start of the revitalization phase. Project manager Ulrich Rudzinski as idea facilitator worked with lighting designer Marco König from König electric light in Arnsberg and Christian Mentrup from NextMove in Münster, all of whom acted as consultants and became involved in the technical design. Additional close cooperation with Martin Professional made it possible to plan a variety of installations ahead of schedule, which were based on LED RGB lighting. In this context, Ulrich Rudzinski from the Ruhrverband had a clear vision of an environmentally-friendly art installation that was capable of using a UV- and IR-free lighting system.

Tripix™
The lighting effect has been achieved solely by using indirect and antiglare LED RGB lights, the first pan-European outdoor installation with Tripix™ by Martin Professional. A total of 68 linear luminaries, protection class IP 66, along a total length of 156 m stage the main girders of the footbridge.

The Tripix system consists of modular units based on single-lens tricolor RGB mixing, which mixes the colors inside the lenses. A color wash system ensures an even distribution of color on all surfaces, thus avoiding unattractive color seams or color shadows.

The Tripix lights are controlled via DMX provide intuitive RGB color control as well as HSIC color control for easy adjustment of color temperature. Lighting sequences and timing are controlled using a Butler XT from the E:CUE company. As well as its calendar function, the electric control box for the master display with its external user terminal provides staff at the weir with an option to make a selection from the various moods, which can be called up separately for specific events.

Conceptual design
Flows of color are based on four conceptual design blocks, whose color and time structure represent spring, summer, fall and winter. The special sluicing also incorporates a scene programming function. In line with international sluicing signaling, the facade of the ship’s gateway is illuminated in shades of green and shades of red indicate that locking is taking place.

There is also mood lighting, which relies on an anemometer, enabling the design of the facade to indicate wave motion in rough water. Two Martin Exterior 200 LED™ RGBAW spotlights complete the design. These use color to highlight both bridgeheads to the rear of the weir, on the left and right hand side of the weir rollers, with the choice of color toning in with the design on the front. The footbridge thoroughfares have streetlights that give off a warm white light, thus completing a visually stunning picture.

The simple staging with its direct interplay with color selection and associated changes in tempo makes this installation easy on the eye, while incorporating it elegantly into the surrounding landscape. Ulrich Rudzinski, Christian Mentrup and Marco König consider that the central themes of energy in their project, namely “Art in Motion,” have been implemented to the highest level.

Thanks to close cooperation with the installation and programming company NextMove in Münster, an object has been created that sets new standards for public spaces and that goes far beyond its call of duty as a mere promotional objective.

Lake Baldeney
Since the creation of this man-made lake in 1933, Lake Baldeney has played a key role in water purification for the Ruhr and with the hydro-electric power station located on the lake it remains an outstanding and ecologically-friendly power generator.

As an investor, operator and employer, the Ruhrverband has established a water supply and distribution network that has been functioning consistently and reliably for some 90 years and that has become recognized among experts as a worldwide example and prototype. Nevertheless, both the Ruhrverband and the power generation company RWE AG as co-investor take their environmental and creative responsibilities in the public domain very seriously.

These days, the lake and its immediate surroundings are promoted, first and foremost, as a destination for local recreation with a multitude of leisure activities that revolve around watersports and hiking. “Ruhr-Atoll 2010” has thus transformed Lake Baldeney, with its redesigned weir, into a visual spectacle that stands as a symbol for art, energy and science.