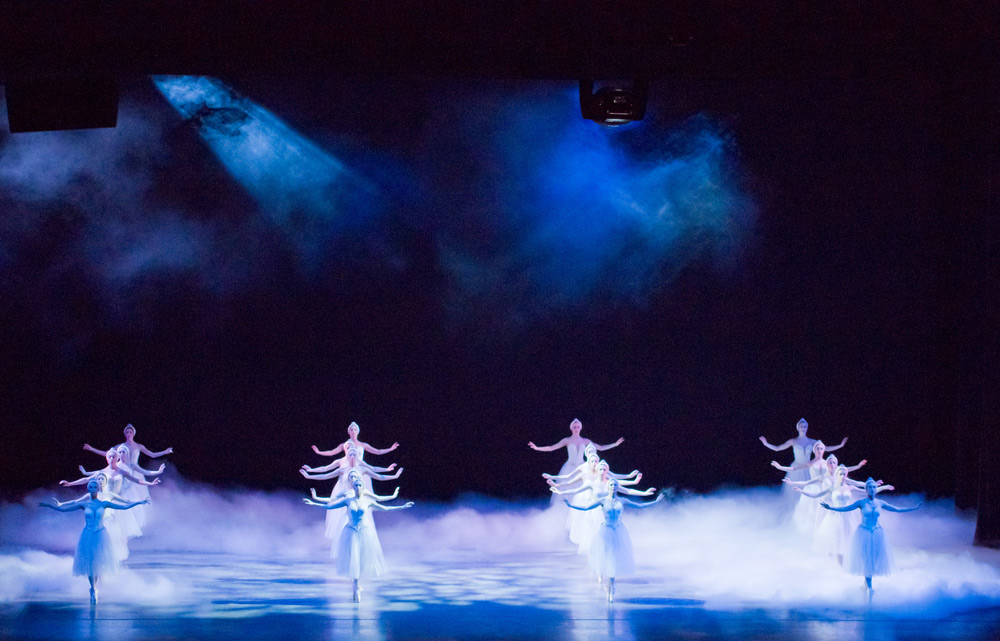 Ballet San Jose is a classically-based ballet company that has delivered international quality, theatrically produced ballet to the Silicon Valley in the San Francisco Bay Area since 1986. The company has a reputation for innovation and education and standards are high.

Kenneth Keith at Ballet San Jose is responsible for lighting design and technical direction for the company’s repertoire of over 120 traditional and modern classical ballets, including recent performances of Swan Lake (February 25-27) and Carmen (April 1-3) presented at the San Jose Center for the Performing Arts.

Off on the right foot
Ballet San Jose recently incorporated into its lighting design a Martin Professional lighting package of color changing and effect luminaires, as well as lighting control products as new design components. Opening night of Swan Lake proved an especially satisfying night for Keith as the Ballet opened to a sold out house with audience members that included movie, rock and sports stars, and perhaps most satisfying, a spontaneous standing ovation.

“As a designer here at Ballet San Jose I have developed a devoted and supportive following for my work over the years, however this opening night I was being stopped by patrons I had never met with praise for my design and I feel that my credit is shared by Martin Professional and the incredible performance of these new fixtures!” Keith stated.

M1 control
Included in the new system is Martin's new M1 lighting console. Keith names two major factors that make the console particularly appealing “The company had done an extensive tour of China and the need for carrying a control board became clear,” he says. “The M1 is light and small and can travel easily by plane or bus and is light and compact enough to take back to the hotel room to write changes.

“The other major consideration of course was function and ease of use. There is a reason programmers and designers love this new board and it is the ease of use while providing great functions and the interface with MSD that make this one great product!”

Keith has experience with numerous other lighting consoles in past productions but chose the M1’s easy to use platform. The M1 has been designed with a single philosophy in mind – simplicity – and features a clean and easy-to-navigate surface. Its fast dual-core processor ensures a fast and responsive user interface, even if hundreds of playbacks and effects are activated simultaneously.

“My programmer Rob Sees loves the new console and with only seven days with the board and the use of the MSD Gold visualization software he was able to have the show ready to go and to great success,” Keith says of the M1 console.

MAC 2000 rig
The M1 has a full lighting rig under its control including Martin MAC 2000 Wash XB™ and MAC 2000 Performance™ fixtures.

“I decided on the XB after extensive research of what was in the market place for a great wash unit for both front and back lighting,” Keith says. “I decided on the XB for its power and smoothness of the wash and great color mixing. They are by far the best wash unit I have used in my career now spanning over 40 years! The Martin Jem K1 hazer also performed like a dream.”

Besides product performance other factors were important to Keith, namely Martin’s global reach and worldwide service and support network. “For years I was a fan of another moving light company but with international touring in mind, including Asia, I feel Martin provides the best support worldwide to their product.” The Martin lighting gear used by Ballet San Jose was purchased and is owned by Fry's Electronics, a generous benefactor who provides use of the system at no charge to the Ballet.

In conclusion, Keith salutes everyone at Martin for their assistance on making the purchase of the Martin gear a success, saying, “To say the time frame for logistics was short would be an understatement. My special thanks to Greg Jones, Brad Haynes and Maryann Berquist for their steadfast and Herculean efforts to see this through.”