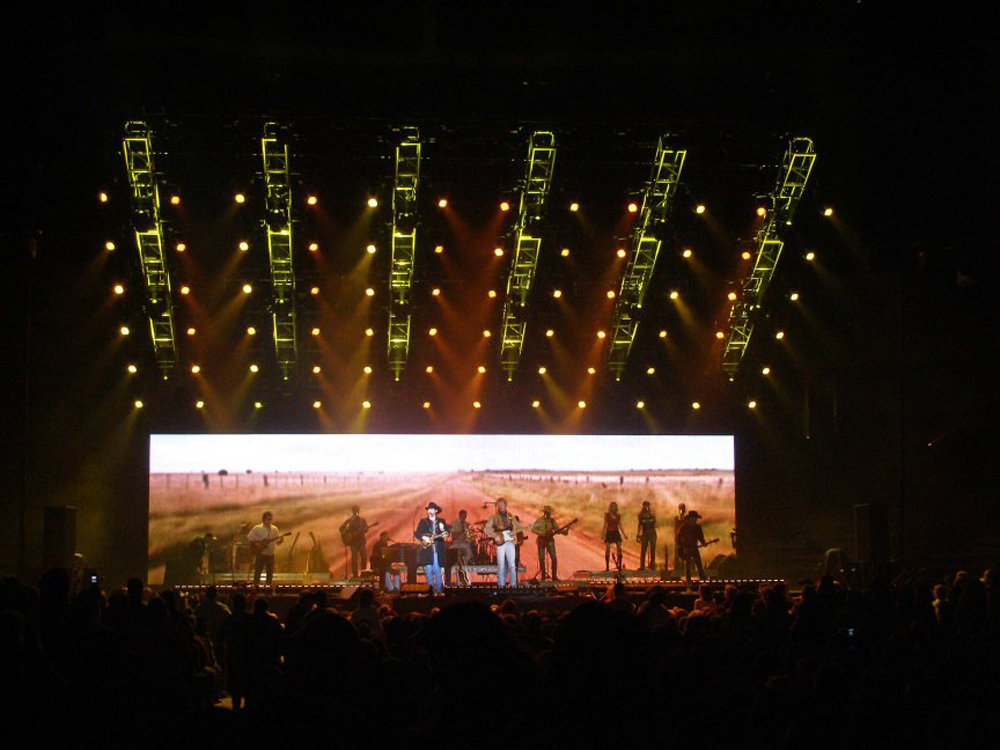 Brooks & Dunn & Boster & Bandit & Martin seem to go together like, well, five peas in a pod, and have so for years. Currently touring the U.S. together with Big & Rich and The Warren Brothers as part of the “Deuces Wild” tour, popular country duo Brooks & Dunn are performing beneath a Larry Boster designed Martin MAC rig with control from a Martin Maxxyz.

Larry Boster has been designing Brooks & Dunn shows for years and is out on the road with the show. The all Martin rig includes 76 MAC 600 washlights, 18 MAC 2000 Profiles, 12 MAC 300 washlights and 4 MAC 500 profile spots with supply from long time partner Bandit Lites. “Bandit is good, they always take care of you,” Larry comments. “We even had the system flown to them. With Bandit, when it goes out the door it’s 100% ready.”

Maxxyz inauguration
This is Larry’s first time using Martin’s Maxxyz lighting board and he received some encouragement and advice on the popular console from lighting professionals Joe Paradise and Eric Wade, as well as Bandit’s Geddy Kordyjaka who had “positive things to say about the console.”

Brooks & Dunn have been on the road for months already and Larry has had very few issues. “Martin is behind their product and I was excited to use the console,” he stated. “With Maxxyz, Martin’s Lighting Controller Specialist Matthias Hinrichs and Bandit made me feel real comfortable. The board is well thought out. You can set up screens – set it up however you want it, but I used it in the default setting, that’s how well thought out the board is.

“Maxxyz goes further than other consoles. With the design for Brooks and Dunn, being able to grab a bunch of lights, it takes a lot of the brain work out of it which lets me concentrate on the artistic side. The ease of use gives me more free time. The console helped enhance the show and allowed me to focus on the creative because it freed up my mind on the programming end.”

MAC rig
Larry’s design consists of six vertical trusses left and right – each with two rows of MAC 600 washlights plus MAC 2000 Profiles. The rig is raked (angled) from upstage at 14 feet to a downstage height of 30 feet. A downstage truss holds 12 MAC 300 washlights and stage left and right are two MAC 500 profile spots each side, always in a breakup pattern to fill up a black hole area. A 53 x12 foot video wall forms an upstage backdrop. “The rig complements the wall and the wall complements the rig,” Larry comments. “The rig is a matrix, so it was perfect to run with Maxxyz.”

Maxxyz speed
Maxxyz has gained the reputation of being the most logical and easy to use lighting console on the market. In fact, when B&D management asked Larry how long a certain effect took him to make, he admits that he lied, stating “quite a while” although it “only took me a few minutes.” He continues, “With Maxxyz I can move much faster through it. I can set all the fixtures by 1 to 1, or 2 to 2. With other controllers I’d have to make a bunch of group palettes. Those couple extra button pushes can make programming slower.

“The color mixing is impeccable and the Fx generator is great - it’s always there on the right hand side. I can copy, just select info in a cue – a select parameter. With Maxxyz you can offset pan and then offset tilt as well. It makes effects easy. I also love the fact that the board saves as you go.” Larry used the Maxxyz’s built in ShowDesigner lighting and set design software as well. “The Visualizer is a big plus and the aspect of focusing helps out a lot.”

For all of Larry’s praise he does have one slight critique. “One thing I would ask though is that the speakers be louder – they aren’t loud enough,” he says. “But Martin is very open to changes if I have them. It is definitely my new console. There is no doubt that many will come to the same conclusion.”

Brooks & Dunn are scheduled to appear on the CMA awards in November and will be touring through February.