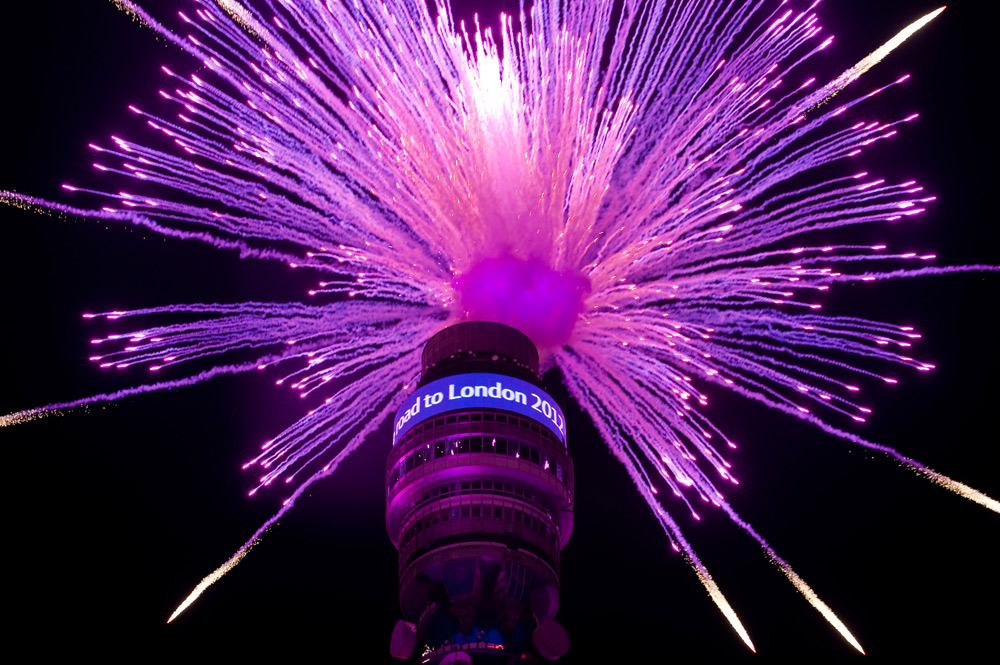 Global communications services company BT has installed a giant electronic information screen at the top of the iconic BT Tower in London. The 360 degree LED screen – made up of Martin Professional LC Plus Series™ LED panels and believed to be the highest of its kind in Europe and the Americas – will be used as an information band, showing messages and providing visual content that will be visible from various locations across the city. The information band was switched on for the first time on Saturday 31st October.

BT has again selected Martin Professional product to illuminate the landmark Tower. The Tower's previous lighting scheme, which featured Martin Exterior 200™ fixtures to highlight the BT logo and brand signage, was a successful scheme that ran for five years. The company has now decided to upgrade with the next level of lighting technology.

Information Tower
The LC Plus screen is over 280 square meters, equivalent to half the length of a football pitch. It is wrapped around the Tower’s 36th and 37th floors, at a height of 167 meters above street level. At this height the screen has to endure harsh weather conditions, including hurricane force winds. It has been fully tested at the Jules Verne climatic wind tunnel in Nantes, France, for combined climatic effects including wind speeds of up to 190km per hour as well as rain, snow and high temperatures.

Suzi Williams, BT Group Marketing and Brand director, said:“As one of the most iconic and well-known landmarks in London, it’s fitting that we’re returning the BT Tower to its original role – as an information tower.”

Martin LC Plus Series
The 59 meter long by 4.8 meter high information screen is made up of 177 separate LC Plus Series panels (118 2 x 1 meter panels and 59 custom 0.8 x 1 meter panels necessary for the screen to fit the available space) and consists of 177,000 pixels and 529,750 LEDs. The installation has been an extremely challenging construction and engineering task. However, it took only 11 weeks to install the screen from the time the first piece of scaffold went up to the final piece of scaffolding being removed.

Successful cooperation
Martin designed, supplied and installed the custom solution in cooperation with Imagination, a worldwide design and events company that specializes in integrated communication. Imagination served as the main contractor and content provider on the project. The collaboration between Martin, Imagination, BT and key suppliers was highly successful for such a demanding project, implemented under often harsh conditions and a compressed time frame and firm deadline.

Demanding requirements
Martin worked on a very short time horizon to meet the demanding requirements of the project. Christian Engsted stated, “Permanent outdoor installations for LED screens are always challenging but in the case of the BT Tower, more so than usual. The special challenges included very strong winds, the risk of lightning strikes and of course the fact that the screen had to fit an existing structure that was not only round but also in a highly sensitive environment. The solution is highly unique and the custom design shows well the flexibility of the LC Plus panels.

“The LC Plus panels were designed for tough outdoor use but even so, special precautions and additional tests were done, including a wind tunnel test at 1,5 x hurricane force, in order to meet the strict requirements. The low weight of the panels (11kg per sq m) was also a key factor. Traditional LED displays, typically 4-5 times heavier, would quite simply be too much of a load and also make the installation much more time consuming and strenuous.”

The LC Plus panels are connected using Martin’s proprietary P3-100 system based on Gigabit Ethernet technology. This ensures reliable operation as well as continuous status monitoring of the panels. The end result is a continuous band of full color video adorning the landmark structure.

Turn-key control
Martin Professional also designed and delivered a turn-key control system for the entire setup with the key features of redundancy, remote-access, robustness, ergonomics and protection against environmental factors.

The highly-secured remote-access feature of the control system allows the Martin Professional service department to monitor all components of the setup remotely. It also enables content creator Imagination to upload new content and modify the playback schedule from anywhere in the world. The redundant setup prevents a single failed device from keeping the system operational, and also allows maintenance without impacting the content playback.

Martin Professional installed and tested the entire control solution on-site and worked closely with Imagination to get the initial content running. The display runs 24/7 at full intensity during daylight hours and is dimmed at night.

For images go to: imagelibrary.btplc.com

About BT
BT is one of the world’s leading providers of communications solutions and services operating in 170 countries. Its principal activities include the provision of networked IT services globally; local, national and international telecommunications services to our customers for use at home, at work and on the move; broadband and internet products and services and converged fixed/mobile products and services. BT consists principally of four lines of business: BT Global Services, Openreach, BT Retail and BT Wholesale.

BT is proud to be the official communications services partner for the London 2012 Olympic and Paralympic Games.

In the year ended 31 March 2009, BT Group’s revenue was £21,390 million. British Telecommunications plc (BT) is a wholly-owned subsidiary of BT Group plc and encompasses virtually all businesses and assets of the BT Group. BT Group plc is listed on stock exchanges in London and New York.