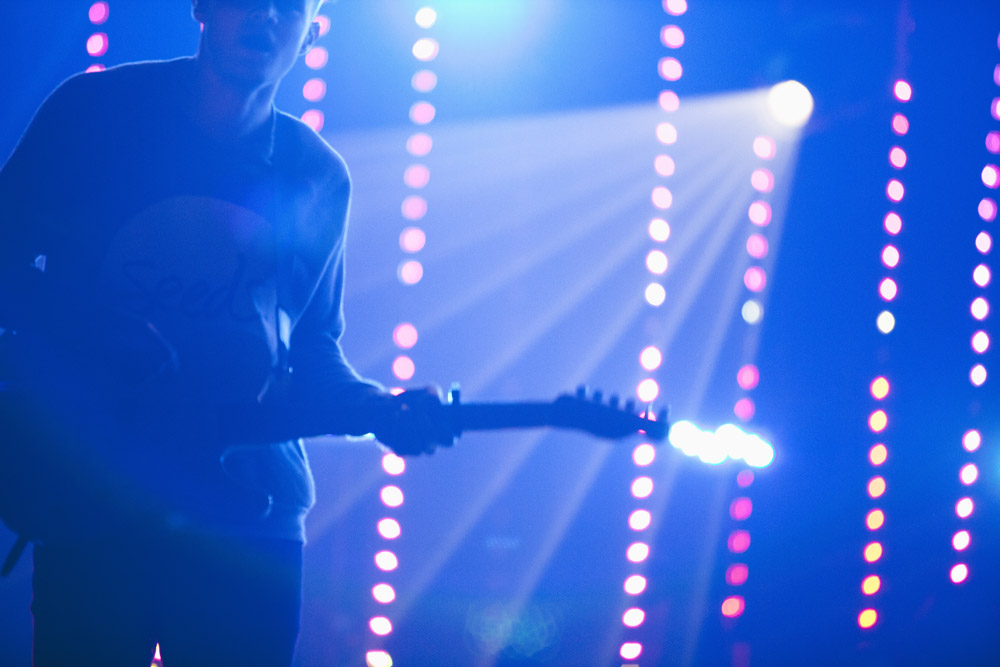 The term “mega church” might have been coined to describe Tulsa, Oklahoma’s 12,000-member Church On the Move. At services, the church’s message is delivered on a scale that rivals major rock concerts, with full-scale lighting, sound and video in a sanctuary that’s bigger than many top music venues. The rock concert analogy is appropriate in more ways than one – the church’s audio and video staff rent rather than purchase most of their lighting, giving them access to the latest HARMAN Martin lighting gear to complement the church’s HARMAN Professional sound system.

“We rent 90 percent of our lighting and it gives us the freedom to change frequently and try new ideas and technologies. We don’t want to be left behind when the industry makes a major shift,” said Andrew Stone, Church On the Move’s production manager and audio director. Renting also cuts down on the need to retain additional maintenance staff – the church can handle all its lighting needs with two technicians. “The rental model also lets us use high-quality gear without spending a ton of money. We can rent more equipment as needed for bigger events.”

Church On the Move utilizes a host of Martin intelligent lighting products including MAC III Profile lighting, MAC Viper Profile high-output 26,000-lumens fixtures, MAC 700 Wash 26,000-lumens lighting and TW1 tungsten wash lights. Stone and crew will buy equipment when it makes economic sense, and recently purchased a number of Martin VC-Dot 1 fixtures, individually controllable LED dots that are used to create customized video displays. The VC-Dot 1 provides new ways to integrate video technology into stage designs, ceilings and other structures. Church On the Move lighting designer Daniel Connell states, “We can use the VC-Dot 1 as a design element, as a backdrop or split it up for use in several auditoriums. It’s amazingly versatile and enables us to easily add dramatic visual impact to a space.”

Lighting designer Daniel Connell notes that music is a key element of Church On the Move’s services and that along with the HARMAN JBL, Crown and BSS-based audio system, a major part of the Martin lighting is to create a modern concert looking feel. He doesn’t want “a lot of flash” but the ability for the lighting to set a mood or tone on stage and throughout the sanctuary. “We don’t have a backdrop or a physical stage set so the lighting is our set,” Connell said. “Other house of worship lighting designers don’t do it this way but we feel it’s an interesting and powerful way to do it.”

Connell finds Martin fixtures provide superior color range and saturation; while some fixtures fall off toward the saturated end of their range and some moving lights aren’t the best at delivering a certain color, Martin handles the full light spectrum equally well. Stone agrees, noting that the church has tried every brand of high-end moving light in the six years Connell’s been on staff and that he and Connell prefer Martin’s richer colors and better look and “feel.”

Reliability is paramount, especially with rented gear. “I don’t want rental fixtures dying in the middle of a service,” Connell states. “After a year of use you can start to have problems but I’ve never experienced that with Martin.” Like many organizations, Church On the Move is bringing in more LED lighting for its reduced maintenance and energy costs.

Since 2010 Church On the Move has enjoyed the sonic benefits of a large-scale JBL, Crown and BSS Audio sound system, comprising 38 JBL VerTec line array element hung in four clusters and complemented by 16 JBL ASB6128V subwoofers, 10 flown and six under the stage. Seven JBL AC28/95 speakers behind the perimeter of the stage provide front fill and the speakers are powered by 49 Crown MA5000i and 10 CTs 3000 and CTs 2000 amplifiers. The speakers and amps in the sanctuary and other JBL speakers and Crown amps throughout the church are linked by BSS Soundweb London BLU-160 digital audio processors, and all A/V is networked using HARMAN HiQnet System Architect software.

“We recently had a conference with 2,500 worship and creative directors from around the country, and have held many major events and big services,” Stone said. “Many people came just to hear the JBL VerTecs because of everything they’d heard about them, and that says a lot. Like the Martin lighting, the audio system has performed admirably.”