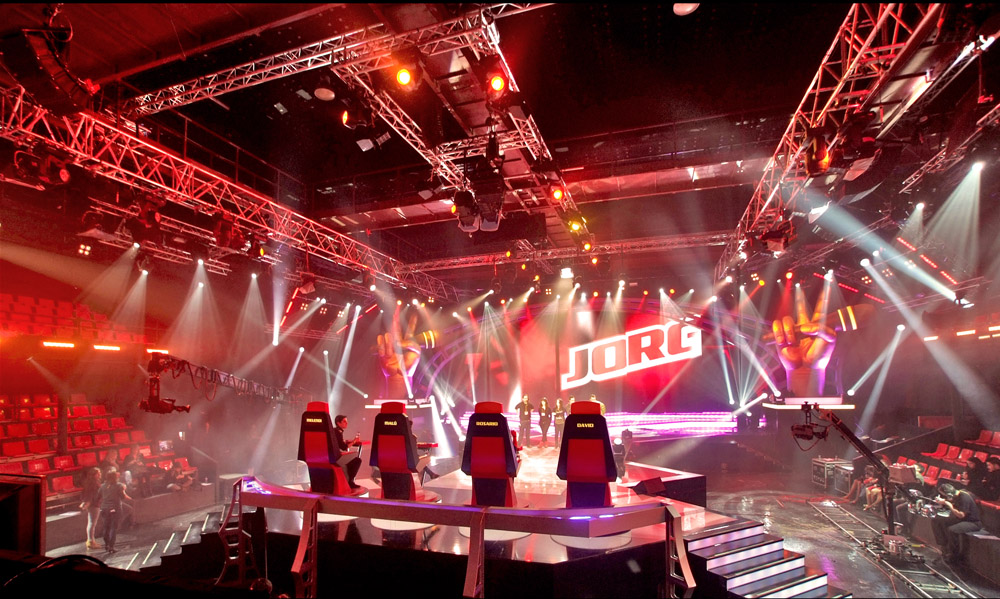 Citylight supplies Martin MACs for “The Voice” in Spain

Reality television singing competition “The Voice” has become a social phenomenon in Spain, where it is called “La Voz,” and uses a large HARMAN Martin MAC lighting rig to help create the live drama. Produced by Boomerang TV and broadcast in Spain by Telecinco, “La Voz” has revolutionized the talent show industry in the country.

The program has drawn immense audience ratings since its debut in September of 2012 thanks in part to the power of social media, although a popular jury made up of well-known Spanish singers (Rosario Flores, David Bisbal, Malú and Melendi) helps as well.

Lighting designer and programmer Julián Perez has been especially impressed with the Martin MAC III Profile. He comments, “Thanks to its power, incredible gobos and zoom system we could get a great range of well-defined beam effects or cover big areas, even using high rates of conventional lighting. It also comes with a great electronic shutter that creates instant effects without the need for complex programming.”

He adds, “The MAC 250 Wash/Beam surprised us with its two types of projection - the wash, which we used in different productions with great results, and a beam that proved to be amazing throughout the production and even impressed our colleagues who don’t usually pay attention to illumination projectors.”

For photography director Ángel Blanco, the tungsten-based MAC TW1 wash light was a great plus. He comments, “Thanks to the versatility of the MAC TW1 we were able to illuminate and color different scenarios in shades that not all luminaires can reproduce, and in a reduced period of time with no need to redirect conventional lighting equipment,” he stated. “We could even use the projectors, especially in live shows, to replace traditional Fresnel lighting equipment in case a lamp failed. They adjusted perfectly to the color temperature and flow of the projector they were to replace.”

Lighting director on “La Voz” is Juan Carlos López who commented on the decision to use Martin lighting. “We chose Martin projectors because they are reliable and versatile. They have easily adapted to changes in the seven months of production and three different program formats. We’ve had few incidences and these were solved by the excellent technical service of Martin in Spain.”