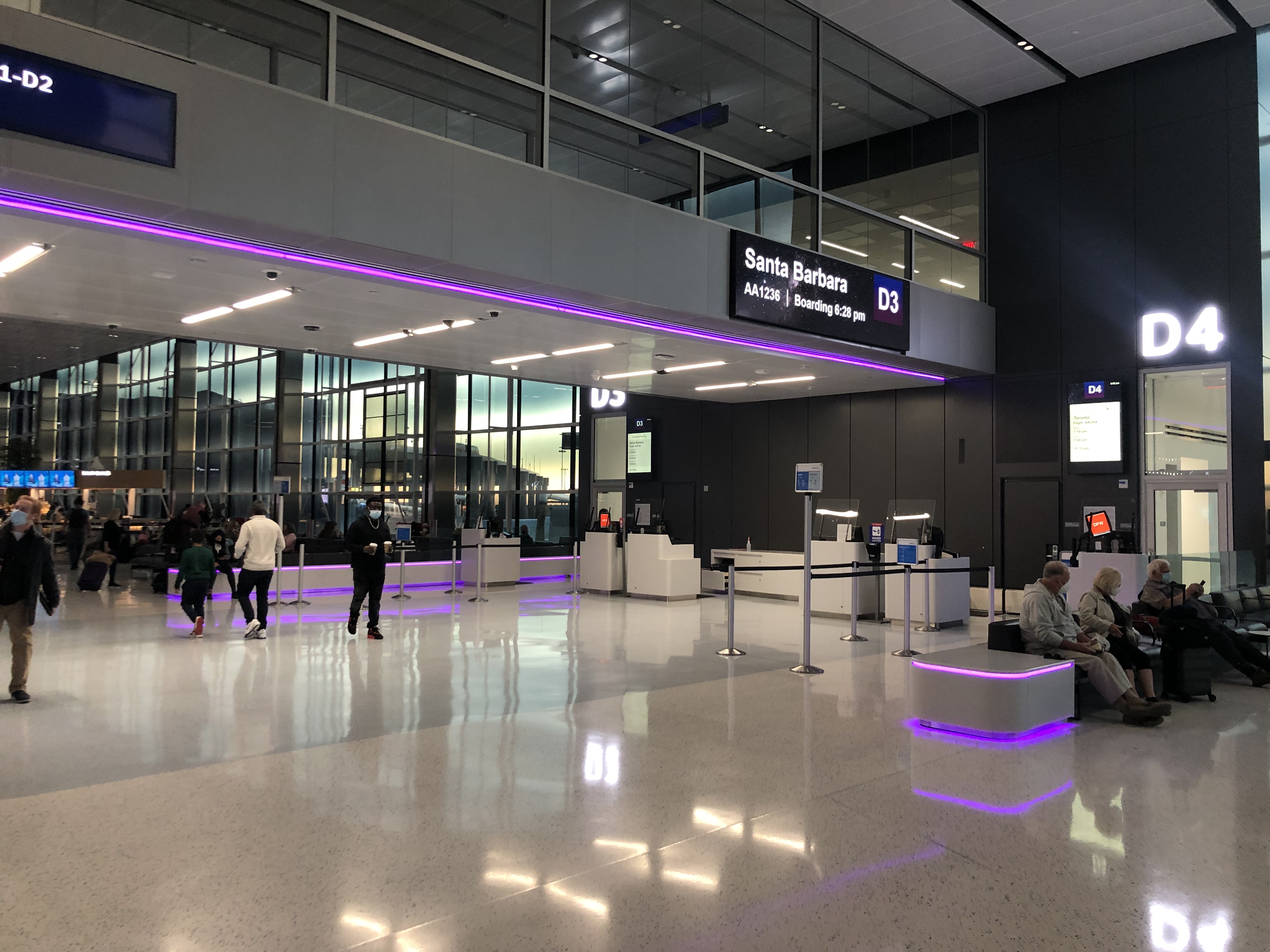 As part of a $160 million expansion, DFW recently added four new gates to its Terminal D area, offering passengers a preview of the technology that will be implemented in the highly-anticipated Terminal F project. The primary goal of the project is to turn DFW into the airport of the future, and so the new gates feature a range of innovative designs seldom implemented in the average airport.

For part of the overall Terminal D Expansion design, DFW Airport worked with joint venture LVHKA (Louis Vidal-Harrison Kornberg-Arup) to develop an intuitive lighting system that could be easily programmed to change colors and patterns as a way to assist passengers with the boarding process––all while staying within budget and accommodating time constraints. To meet these goals, the team designed and installed a system using Martin VC-Strip 15 LED video strips and the P3-050 system controller with the PowerPort 1000 IP Install extension.

“We initially envisioned DMX-based lighting as part of the new user experience at the Terminal D gates,” said Christoph Gisel, Lighting Designer, Arup. “However, because the operators would need to manually match what is happening on the video displays in terms of speed and colors, we suggested using P3 instead to create a system where you can just feed video into the lighting controller and it displays accordingly. You can control speed, colors and all sorts of fun effects without having to set it up separately from the video content.”

The contractor team mounted Martin VC-Strip 15 LED elements above and around each gate, including some of the tables in the waiting areas. The lights can be easily programmed to emit a variety of colors and effects for any application, but the airport will primarily use them to alert passengers when it is time to board. Specifically, the lights at the gate will transition from a solid blue to a softly flashing purple color, letting passengers who may not hear the announcements that the boarding process has begun.

“I've done a lot of onsite commissioning projects in the past, but this was a unique utilization of our VC-Strip product, and the results are pretty cool,” said Marion Hall, Senior Product and Application Specialist, HARMAN Professional Solutions. “If someone is sitting at a restaurant or somewhere that's close to the gate, they can look over and see if the LEDs are changing colors and pointing towards the gate, and instantly know their flight is boarding.”

Calibrated at the pixel level for optimized content overlay and control, the VC-Strip 15 excels at providing video-based lighting for any application. While available in a variety of lengths, the VC-Strip also allows for custom cutting to achieve the perfect length. This particular feature was crucial for the installation team, as they needed to custom-fit the lights to the tables’ curvature so that each light was uniformly installed.

“Other lights didn’t come short enough to make it around the corners or curves of the millwork,” said Gisel. “We definitely needed something that was tiny with some flexibility, and we also wanted to keep the pixel distance the same across all the applications. That was why we picked the VC-15 Strip lights.”

“I was originally concerned that there was too much ambient light within the terminal for the strips to stand out, especially during the daytime,” added Hall. “But I visited the airport recently and was happy to see that they work really well. It's a very simple and subtle design, but it's certainly effective for what we wanted it to do.”

The VC-Strip 15 offers a wide creative palette of video programming, pixel mapping and more, all of which is made easy with the P3 software’s user-friendly interface and accessible controls. The P3-050 System Controller supports systems up to 100,000 pixels and accepts DMX, Art-Net and sACN inputs while being a compact and affordable solution for a variety of settings. Additionally, the P3 PowerPort 1000 IP Install ensures reliable power output, high-speed video processing and easy configuration for the lighting throughout the four gates. As the lights will be controlled by airport integrator specialists Synect, Hall found that the P3’s simplicity and responsiveness allowed for a smooth handoff to the technicians in charge of the system.

“We tend to recommend P3 to customers because it's a simple system,” explained Hall. “The pixel mapping is really easy to use since it’s a drag-and-drop system. Plus, the P3 system we’re using for this install is a fairly simple cabling ecosystem. It's just the P3 controller, which converts video clips provided by Synect into our propertatery protocol, which then feeds through a Cat6 cable to a Martin PowerPort and combines power and the processed data into a single hybrid cable out to the VC Strip, as opposed to having separate off-the-shelf power supplies every 10 feet and dealing with DMX-512, which in itself has both channel and bandwidth limitations. So it's just a single cable from the PowerPort to the fixtures.”

Overall, the balance between simplicity and ingenuity made the lighting fixtures a strong addition to DFW’s vision for the airport of the future. Both its efficient installation and accessible operations will allow the airport to easily adapt the system to its upcoming expansions.

“The system as a whole is pretty simple in regards to the amount of parts and pieces required,” said Mark Toussaint, General Manager, Hossley Lighting and Power Associates. “The install was done near the end of the construction process, almost as a last-minute addition, and the system was simple enough for the electrical contractor to come back and finalize his work after a lot of the other trades were already completed. It could have been a lot more challenging with a more complicated system.”