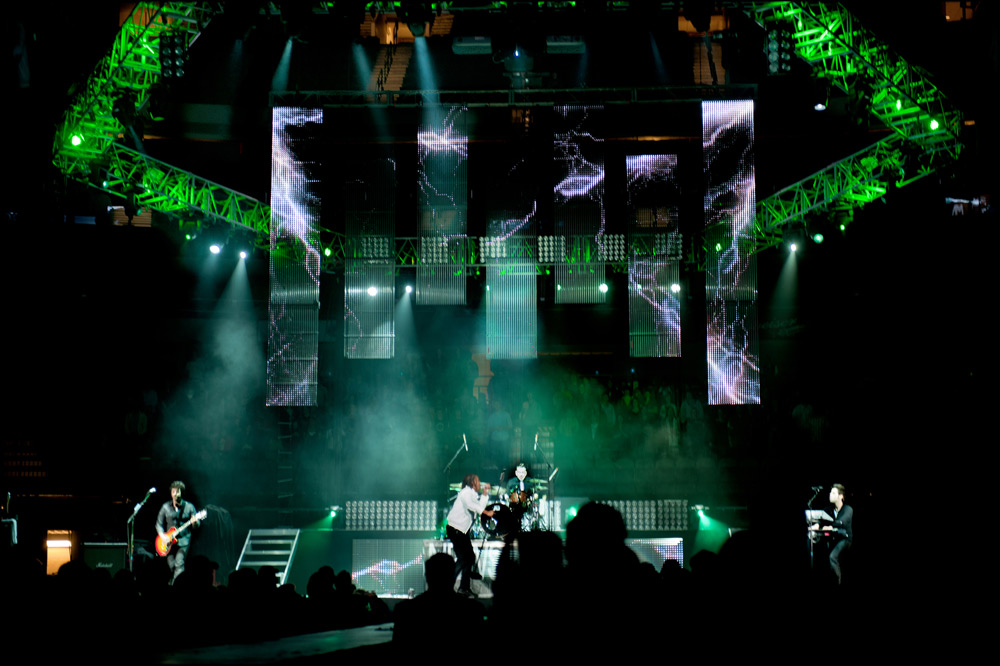 The largest annual Christian music tour in the United States – Winter Jam – toured the country from January until late March with acts like Third Day, Newsboys, Newsong, and Sidewalk Prophets.

One of the main visual elements of the set was a flown wall of upgraded LC Series LED panels supplied by Axxis, Inc of Louisville, KY (www.axxisinc.com). The enhanced panels were upgraded with many features of Martin’s LC Plus™ LED panels including compatibility with Martin’s advanced video signal processor, the P3-100 System Controller.

Production manager and set design duties for the tour were handled by Jerry Holcomb (along with his usual audio duties) with bands performing on a 360o set with views from all angles. Lighting design was by Timothy Vaughn of Production Management Group working with Jerry Holcomb.

“Sometimes we’d get no one behind us and sometimes there would be a lot of people behind us, you just never knew. That’s one of the reasons we used the LC panels - you can see through them,” Holcomb commented.

Panel redesign
The original design had the panels mounted along the bottom of a hexagonal truss, but once out on tour Holcomb wondered if they were really achieving the best bang for their buck. He comments, “We really weren’t utilizing them the best we could and it seemed obvious that they would look better closer together. So we sat down with personnel from some of the other bands and reconfigured the panels as a wall inside the hexagon truss.”

The idea for the new design was called into Axxis who rather incredibly delivered updated engineered drawings in less than an hour!

What sounds like a tedious redesign of the LED panels from a horizontal orientation to a vertical proved rather simple thanks to the LC’s lightweight design and ease of connectivity. Not to mention the benefits of the P3-100 Controller. The P3-100 makes setting up an LED screen straightforward and intuitive and allows LED screens to be treated like lighting instruments through direct DMX control of brightness, color, pixelmapping and more.

“Another reason I like the panels so much is that the P3-100 allowed us to take the content and easily reformat it to the new design. It also allowed bands to bring in their own content which we imported into a Martin Maxedia media server and the P3 formatted it to fit and function on the fly which was great,” Holcomb states.

The new configuration involved separating the panels and hanging them vertically in seven strips of varying height, effectively filling in a large space. “Because the eye fills in the gaps between the panels, we were able to expand the space with basically unbroken content across a wall,” Holcomb states. “Even though they are low res you can fill up a lot of space and do a lot with them, and for our budget it’s a great product.”

Easy tear down and set up
The LC’s easy-to-assemble design allowed the change to happen in a matter of hours. Much attention has been paid to ensure that the panels are easy to set up via the industry standard truss system.

“The LC has less cabling than other systems, which was great, especially for this configuration,” Holcomb states. “The way they’re linked together, you couldn’t really notice any cabling. Also, I was surprised how you could see the content and color so well from nearly all angles in an arena. It made you feel like you were still part of the show even if you were sitting off to the side, which for our audience is great,” he says of the LC’s wide 100° horizontal viewing angle.

Other Martin gear used on the tour were Stagebar 54 LED battens rigged on the hexagonal truss for audience washes, as well as MAC 700s and MAC 250s. All of the lighting gear for the tour, as well as the audio and video equipment, was supplied by Axxis.