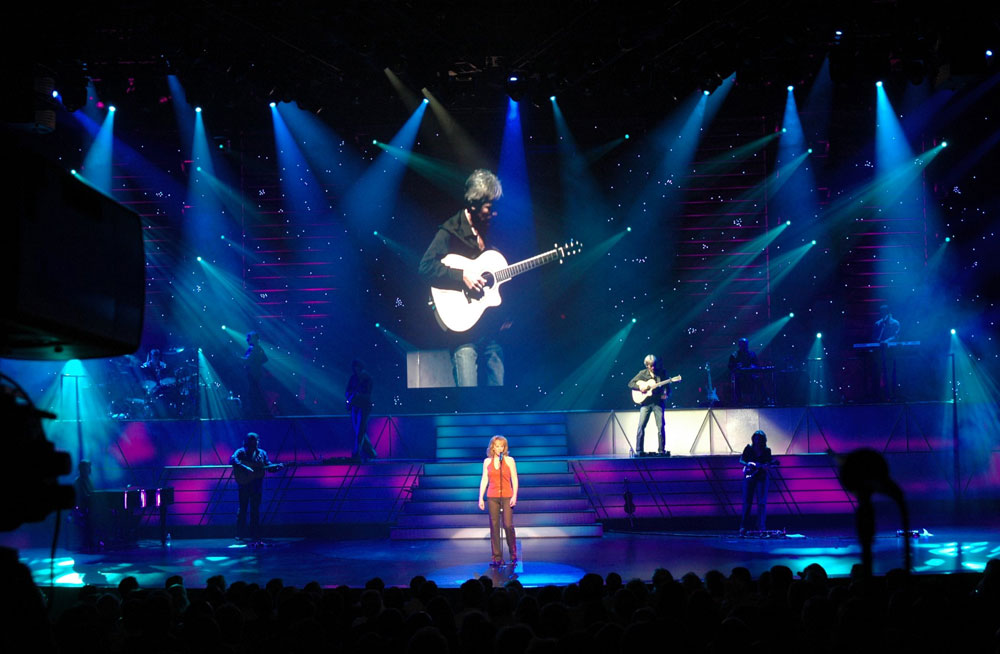 With a string of summer shows under her belt and another season of her hit TV show approaching, Reba McEntire, one of the best-selling country music performers of all time, is one busy lady. Reba has just wrapped up a run at the Hilton in Las Vegas with lighting design by Peter Morse who has been with Reba for the past 15 years and has handled 5 of her tours. “It’s been a great relationship,” Peter says, “and the advantage to Vegas is that it allows her to work on her TV show.”

Lighting, video complement
Peter had MAC 2000 Wash and Profile fixtures at his disposal along with other automateds all run from a Martin Maxxyz lighting console. Also instrumental to the show were digital effects from three Martin Maxedia Digital Media Composers running through an LED wall. Lighting gear was supplied by PRG.

Peter explains the set up, “The set is largely influenced by video and consists of an LED wall in the middle with two roughly 20 feet tall by 6 feet wide vertical panels on each side - louver panel shutters – that rotate from front to back. One side is black and one side reflective for front projection which allows us to put light through them, or on them, or projection on them. I realized I wanted to surround these with light so I put automateds down the side of those panels for scenic treatment.

“The design of the lighting started with the fact that they wanted the lighting rig to support the projectors that do the front projection on these panels. I knew we had to come up with something that hung over the stage itself and projected out over the audience. That led to three V shaped trusses - stage left and stage right V trusses which point downstage; and a middle V truss that points upstage. Then I laid in as many automated lights that I could get away with. The advantage of doing the V’s (fingers) and jutting them out over the audience was that it allowed me to have some hard edge Martin’s out in front for key light for solos when they come downstage. And there are times when we want just a full lighting look and there is nothing that does that better than the Martin 2K.”

Nothing like Maxedia
There are three levels to the set – floor, mid riser and top level. The mid and top levels have LED for band fascias which take Maxedia content. “The artist has never had anything like Maxedia,” Peter says. “We picked patterns to match the lighting cues - it was pretty effortless. Another element of the show that is fun is the Maxedia driving the two fascias. Occasionally the panels spin around to solid white and we drive B roll footage through the entire system including the Maxedia so we have two band fascias, LED and four vertical panels all doing a composite image of B roll film footage.”

Peter uses side lighting vertical ladders, lined up with each of the band layers and apron to properly sidelight everyone for divided color and light looks. “I’ve always liked the theatrical method of side lighting and have used it on almost all shows I design,” Peter states. “I like low level light when possible so we get different angles. We have the option of washing steeply from the top V trusses or from more classic angles like the top of the sidelights or more radical angles very flat from the sides.” Lighting on the side ladders are 2K Washes with all upstage floor lights, lighting for backdrops and cycs, backlighting into shingles and the band mostly 2K Washes as well.