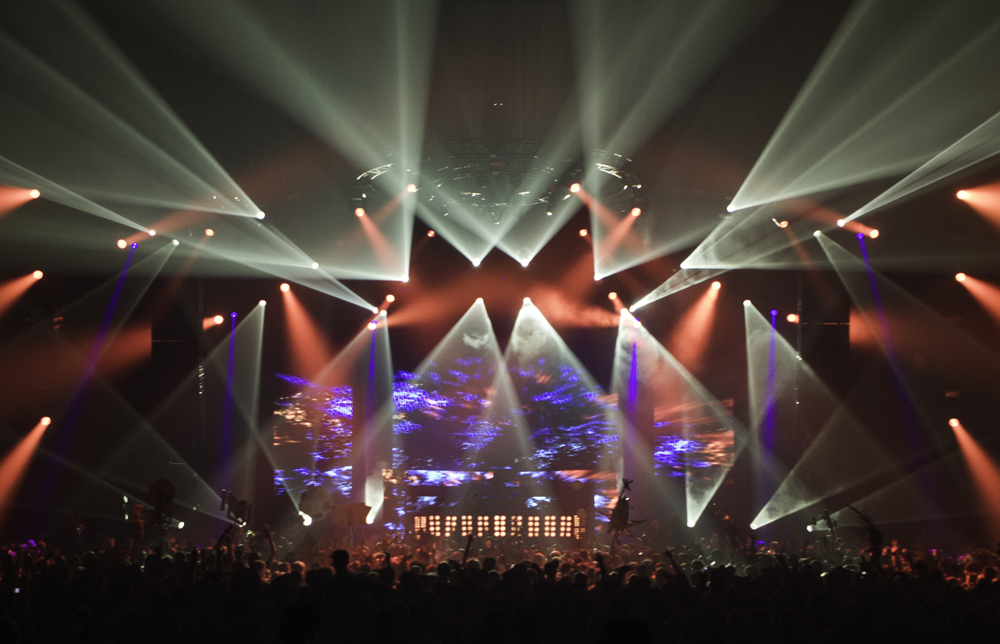 Electronic music artist Bassnectar, known for his live performances and light shows, was recently out on a North American “VaVaVoom” tour beneath a Christie-supplied Martin rig designed by Michael Smalley.

Michael, who handled lighting and video design and lighting operation on the tour, made a decision early on in the design process to minimize the amount of LED fixtures. Despite that, he found it impossible to stay away from the MAC Aura.

Irresistible Aura
“We had just used 100 plus MAC 101s for our New Year’s show in Nashville and they were amazing. But as I started to ponder our next tour design, I really wanted to use fewer fixtures and all lamp fixtures,” he states. “The big Issue though was...I loved the Aura!! I wanted them in my rig so I decided to put them at the top, middle and floor level. Those are the areas where the rig transitions from either lighting to video or negative space.”

The Auras, used to ‘shade’ the different elements of the rig together, are located on a central ‘Pod’ comprised of video, moles, and Auras. “The Auras are only feet away from the crowd so having the ability to dim the beam was crucial,” Michael says. “Also, the zoom was very helpful as the Auras sit right in front of the video wall and I wanted to use them to light up that surface.”

Full MAC rig
As Michael improvises the entire show, flexible fixtures were a must with other Martin MACs also playing a key role. He comments, “A fixture that really impressed me and honestly changed some of my notions on design, and most definitely fixture choices moving forward, is the MAC 2000 XB with the beam assembly. The intensity of the output is great and I really love the beam capability,” he said. “I would run every fixture in my rig at narrow the entire show and then throw them all into wide for certain moments. Every fixture in the rig can give me a great narrow focus to a really wide zoom.”

Michael also used MAC III Profiles, which he calls “basically my favorite spot fixture ever,” and also incorporated MAC 700 Profiles. “For as long as I've worked for Bassnectar he's wanted a light on him with a foot switch, the curve ball being he wants it to be constantly changing color and moving. My solution was three MAC 700 Profiles pointed on him with the colors synced to my programming and a constant gobo or animation wheel so it appears to him that they are always changing and moving, but really they are just a great special when he wants to be lit up.”

Michael has praise for lighting design assistant Andy Cass, who helped with the design and creative process as well as video content development. “My lighting crew chief James Poepping, as well as the rest of the crew from Christie and LMG, was amazing as well. We had been forced by venue size or weight restrictions to change the rig throughout the tour. James and production manager Brendan Hoffman did an exceptional job coordinating which setup would work best in each room, and luckily the fixture choices we made gave us the flexibility to go from a 1500 seat theatre to a 10,000 seat arena. Production managers Bon Strakele and Brendan Hoffman were crucial parts of getting this rig built and getting it from city to city. I owe these guys the world.”