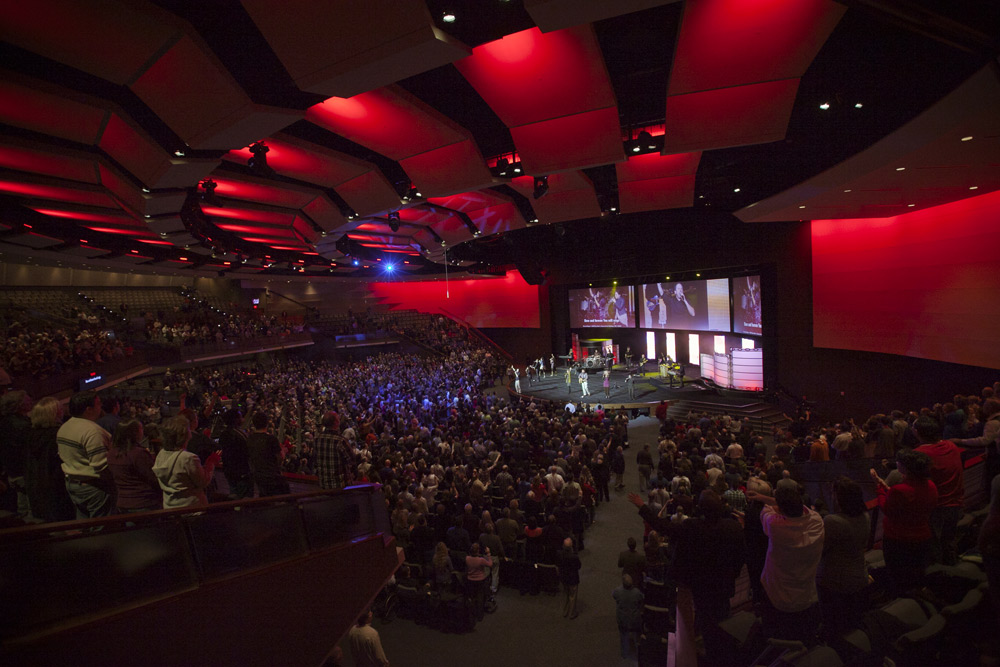 Gateway Church is a Christian megachurch in Southlake, Texas, that opened a new campus in November of 2010 with a main auditorium that seats 4500. Gateway’s lighting director Kyle Russelburg had three factors in mind when looking for a lighting system for the new facility: shooting for TV/web broadcast in HD, lighting for unique services, and hosting conferences throughout the year.

“We needed a lighting system that was going to hold up to the work load as well as a system that was flexible and would give us the ability to give us multiple design options,” he explains. “Once I had the overall design down, we turned to Acoustic Dimensions to carry out the majority of the infrastructure and backbone.”

Russelburg found what he was looking for in a large Martin Professional lighting system made up of 12 MAC III Profile™, 16 MAC III Performance™, 6 MAC 2000 Beam XB™, 9 MAC 2000 Wash XB™, 6 MAC 700 Profile™ and 12 MAC 250 Entour™ moving heads along with 66 Stagebar54L and 36 Tripix 1200 linear LED luminaires. Mid-air projection haze is from 4 Jem K1 Hazers™. Complementing the lighting system are digital graphics and video from a Maxedia PRO™ media server across upstage Martin LC Plus™ 1140 and 2140 LED panels.

Russelburg describes Gateway as an active church with the fixtures operating about 10 hours a day, 7 days a week. “Even with that amount of hours, we have had few issues besides changing lamps. I'm very happy with the products we chose.”

Lighting vendor for the installation was Barbizon Lighting’s Texas office who Russelburg says were absolutely great to work with on the project. “We have used them in the past for expendables, but this was the first time I had ever used them on an install. It really was a great experience.”

The Martin lighting fixtures are located in several areas of the auditorium - off of catwalks, stage electrics, mounted in the ceiling and on the floor. “Just about anywhere I could fit a light we put one there,” Russelburg says. “With the MAC product line Martin just seem to have a light for every size show I was working on. It really came down to when they released the MAC III that I knew I was going to be going with Martin on this new install. I needed a fixture that could give me the output at some of the distances I was throwing and the MAC III stepped right up the plate and did not disappoint.”

Not that there weren’t concerns with such a large lighting system. One was the fear that they would come off as a rock show or just another performance. Russelburg explains: “Our goal is to create an environment of worship so that people walking into our doors feel something different than they have ever felt at another church. Martin lighting really help us create that atmosphere with not just great products but a support staff that is right there with us whenever we need them. Brad Haynes and Daryl Sutton have been a huge help in everything we do here.”