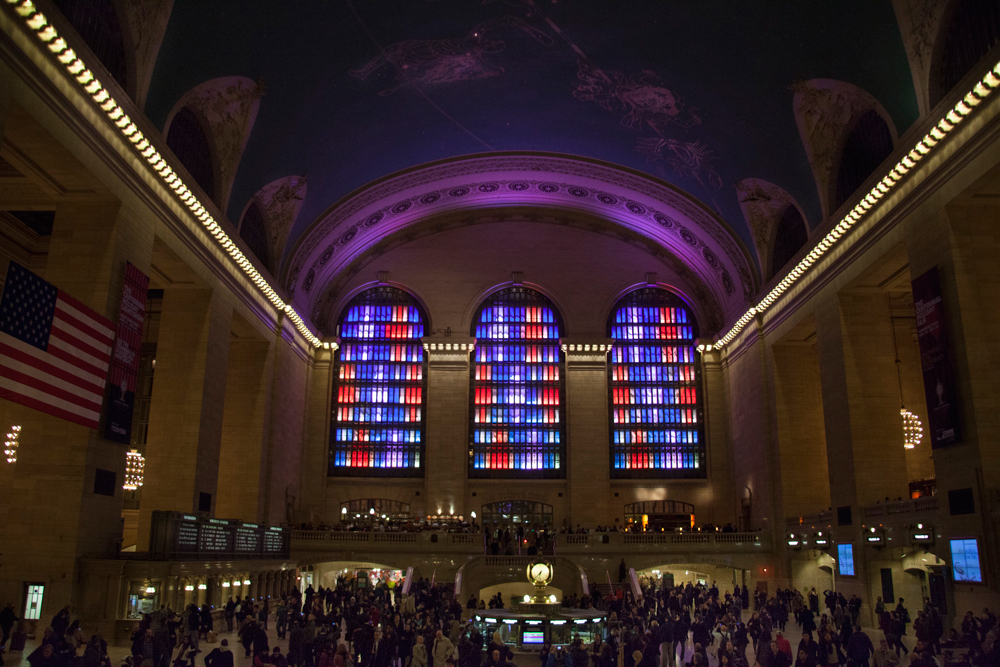 Grand Central Terminal lights up for the holidays with Martin Professional

As New York’s Grand Central Terminal celebrates its 100th anniversary, the Metropolitan Transportation Authority (MTA) Metro-North Railroad decided to create a beautiful lighting design for all travelers and New Yorkers to brighten up their holiday spirit. Partnering with Toshiba, a concept for a light show filling the west windows of the terminal was created by designer Michiru Tanaka, displaying colored patterns and images during the evening hours. Bestek Lighting & Staging, Inc. deployed an impressive lighting system in the historical building featuring more than 350 of HARMAN’s Martin Professional lighting fixtures.

There were numerous challenges facing Bestek’s team on the project from the start. Not only is Grand Central Terminal a historical, high profile landmark in New York City, but it’s also a very active transportation hub, with 250,000 or more travelers and visitors passing through daily, and more during the holidays. The lighting design had to meet specific security specifications to keep the station safe. In total 354 Martin Professional Stagebar 54s fixtures are deployed on custom rigging, running on 24 full universes of DMX from 5pm to 11pm every night through December 26, 2013

“With so many restrictions and requirements listed for this project, we needed to worry less about the physical lighting fixtures and more about the actual programming and installation for a safe and entertaining project,” says Kevin O’Brien, Resident Lighting Designer, Bestek. “The Martin Stagebars fit perfectly into the windows at Grand Central and the color matching throughout the entire spectrum, from fixture to fixture was nice and even. Given the fixtures’ age, that’s a testament to Martin quality and durability.”

Bestek had to ensure excellent hardware back up given the duration of the job and quantity of fixtures. The supplier of choice for the Martin fixtures was Main Light Industries. “The guys at Main Light have been fantastic in their support of Bestek and the holiday lighting project at Grand Central Terminal,” stated Van Allen Rice CEO and Project Manager, Bestek.

The pixel count of the project is 270 pixels-wide and 8 pixels-tall. Media Creator and Programmer, Sean Cagney, of Amazing Industries, LLC., animated all the elements for Tanaka’s design. “Despite the low resolution, everything was created to the pixel specifically for this animation. You can't just drop in stock media to fill time,” says Cagney. “Pixel mapping is a symbiosis between video and lighting to create something engaging and fascinating. Some of the elements were created as fully 3-dimensional systems with particles to make the correct motion.”

The final installation took three days of adjusting the color and brightness of the elements. Bright elements pop out of the windows and the dark elements create a touch of color in the fixtures for a background glow in the windows.

Bestek researched many different fabrics as light-reflective surfaces to serve as miniature “bounce” drops for each window, while not blocking the sunlight during the daylight hours. This was an important specification from Metro-North. Additionally, all materials had to be certified flame retardant and the equipment and hardware had to be approved by the terminal electrical and safety personnel.

To put together a lighting design of this magnitude, there was no true way to actually demonstrate the end result without installing it. Bestek installed a preliminary set, which ended up being the first third of the entire piece in the 100-year-old windows.

Cagney added, “The idea of this project was to create a pleasant holiday atmosphere in Grand Central, a place where many are rushing to get from A to B, without taking the time to enjoy the beauty within the station. The performance level of the Stagebars is very high, giving us a total package from the brightest animations to the lightly dimmed aspects. To grab the attention of a New Yorker, even for a minute with this beautiful lighting design is the ultimate approval.”