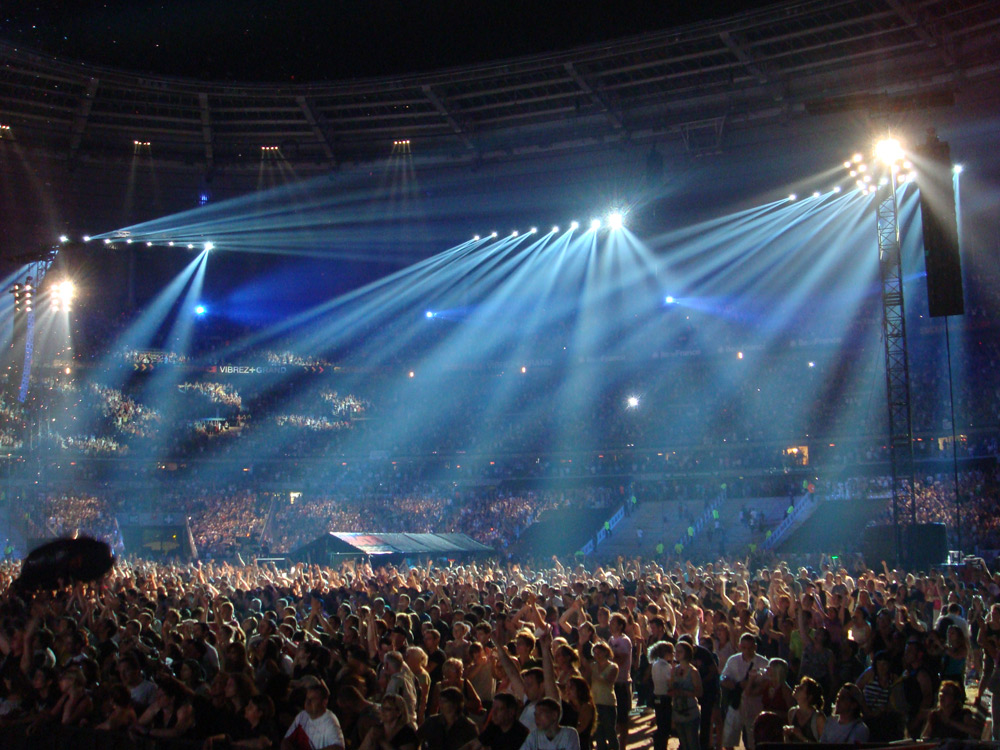 Fill the Stade de France! This was the unbelievable challenge that music group Indochine set itself. And they did it – on June 26th during their Météor tour - the huge tour undoubtedly reached its culmination during this exceptional concert. Around 80,000 fans gathered in the gigantic stadium in Paris to see France's most lauded rock group enter the history books as it celebrated thirty years in the music business.

The tour officially kicked off on 6 October 2009 at the Zénith in Rouen and ended in a grand finale on 15 September 2010 with a final concert at the Palais Omnisport in Paris Bercy.

The lighting
Olivier Payen, the tour's lighting designer, who also worked on Indochine’s previous "Alice&June" tour, succeeded in creating a truly breathtaking light show. However, according to the team managing the project, it was no easy ride. Apart from the challenge of an enormous stadium, from the outset specifications were determined by the video layout. With five 16:9 screens occupying the entire north curve of the stadium and covering a total area of 720m2, there was little space left for the lighting. The design used lighting to surround the screens in order to break up and soften their severity and ensure they would blend into the décor.

In order to deal with all of these constraints while adhering to demanding specifications, rental company Arpège recommended Martin Professional’s new MAC 2000 Beam XB fixture.

MAC 2000 Beam XB: powerful and versatile
A number of light sources were used on stage, both rigged and on the floor. In addition, 6 MAC 2000 Beam XBs were placed on each side of the stage to complement the screen design. The 2000 Beam XB’s power allowed them to project effectively in front of the extremely bright video screens.

At the same time, Olivier Payen needed a powerful light source capable of filling the stadium across the audience for the various camera angles. Some 36 additional MAC 2000 Beam XBs were therefore installed beneath the stadium's canopy, fixed to six approx. 15 m long bridges.

Thomas Dechandon of Concept K, the tour's console operator, told us what he thought at the end of this extraordinary concert: "I am hugely impressed with the output of this new light. The MAC 2000 Beam XB beams made it easy to draw in the smoke, even though it was still very light! It has all the benefits of the MAC 2000 Wash in terms of dimmer quality and precision of movement." Thomas also appreciates the full capabilities of this new fixture. "You still get the effects of the gobos, but you also keep the option of making the beam burst out using the honeycomb lens to obtain a true wash light. I am fully happy with the output of this light. It's perfect for stages of this size and for open-air use.”

Olivier Payen, too, is just as satisfied with the MAC 2000 Beam XB: "Grouped in clusters of six or eight, they create low-angled lighting effects in the audience and allow for positioning within the arena, which fits perfectly with the dimensions of a stadium. The ACL-type effects (fan, cross, uncross) are perfect; even in color or with a gobo, the output is spot on. I wanted to create some wash light effects among the audience - mission accomplished".

This new, high-output light is no less accessible for all that, comments Olivier Payen. "The upgrade kit is very affordable and delivers a real benefit in comparison with its competitors. This is a useful fact when you know the importance of the budget for this type of show."

Packed with technology
The MAC 2000 Beam XB’s 1500 watts of power offers a clean-cut, compact and extremely bright beam, which is perfect for wide-beam effects and long throws. Even with very narrow beam angles, it produces excellent, high intensity results. The electronic ballast enables hot lamp restrike and yields all the benefits associated with flicker-free light.

Most notably, it is now simple and cost-effective to convert a MAC 2000 Wash XB or MAC 2000 Wash – two of the most advanced wash lights on the market – into a powerful beam fixture. The upgrade kit (new front lens module with a set of four beam effect gobos/apertures) can be installed in less than five minutes.

MAC III: the proof
In terms of lighting, the MAC 2000 Beam XBs were not the only Martin lights doing the honors at Stade de France. Alongside the 32 MAC 2000 Wash XBs and 36 Atomic 3000 strobes installed for the occasion, some 22 MAC III Profiles attended the party.

The MAC IIIs were used throughout Indochine’s tour and Olivier Payen was keen to incorporate this fixture, which he feels "offers a wide range of options in terms of effect.” Sixteen of them were installed above the central screen for multiple reasons - to add texture to the stage, to create special effects across the audience when the lead singer encouraged them to join in, or to create aerial drawings above the stage.

The other six MAC IIIs were installed on either side of the stage on sound towers located at the front of the stage. They were used to create a color wash, or a special effect on the artists. Although the screens were very bright, the MAC IIIs were clearly evident. At times supplementing the texture or color on stage, they provided different hues to the set while the MAC 2000s created designs above the screens, and vice versa.

"The MAC III met all my expectations during the Stade de France concert. Seen against the background of a 720m2 screen, the effects were clear and effective. This is indeed a high-quality product!" says Thomas Dechandon, who adds, "We had no complaints about the MAC III. This is a product perfectly designed for stages of such a scale. The MAC III is an incredible fixture at many levels. It enables a wide range of special effects, the red color mixing is truly perfect, and the zoom range and speed more than meet the requirements. As for the beams, they are very sharp and defined when projected over distance.”
;;
"I am convinced that this will become the benchmark product like the MAC 2000 Wash." And what about the MAC 2000 Beam version? "This model is a real asset. This new light without doubt heralds a wonderful future," he adds.

Martin: a complete and innovative product range
Olivier Payen says he is always reassured when using Martin products, and particularly when he thinks of the MAC 2000 Beam XB. "There is always a risk involved in selecting a new product, as I know well from experience. But thanks to the products developed by Martin, I can minimize this type of risk – not a risk I would take with just any manufacturer. I really feel that I can trust them. I would like to thank Martin for developing such affordable products for venues on the scale of the Stade de France."

In addition to the MAC 2000 Beam XB and the MAC III, Olivier Payen adds, "The Atomic 3000 is a true success story, while the MAC 301 is a real gem when you are developing as a lighting designer. I personally have been an avid fan of the MAC 700 ever since it was launched, because it's an all-in-one product. Having worked on a good number of events held on Olympic-type stages, I can say that this is the optimum spot. The Wash has become a natural addition to the set."

Olivier Payen sums up by stating, "A new benchmark has been set at the Stade de France!"