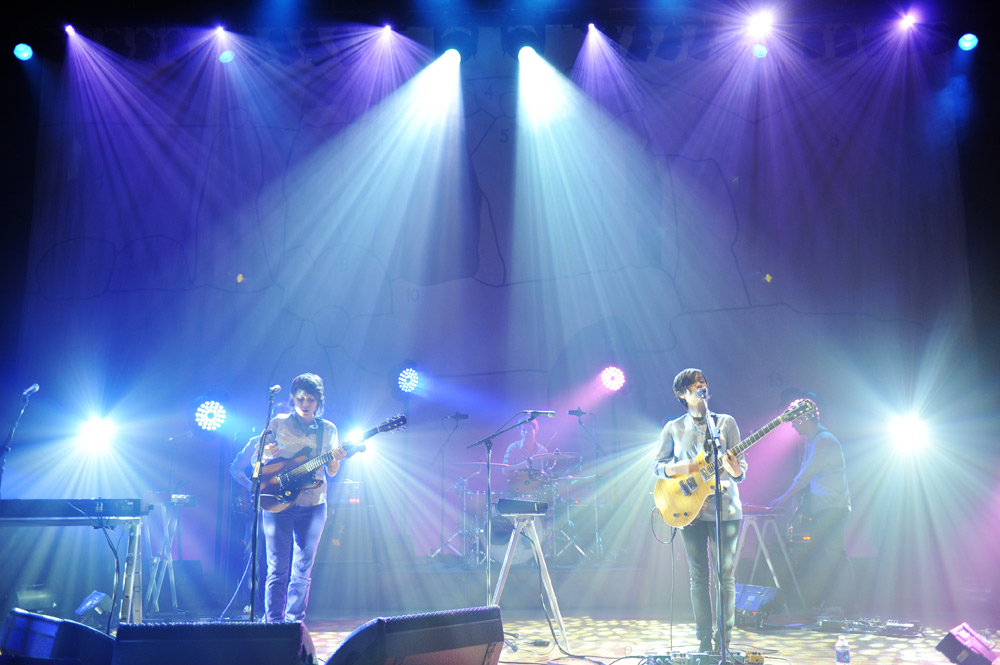 Tegan and Sara lighting designer Benjamin Price was given a challenge - fit the entire lighting rig for the duo’s current tour into a 10 x 7 foot trailer without exceeding the 5,000 lb weight limit. The limitations put significant constraints on gear specification and ultimately helped to shape the lighting design.

“It meant of course that I needed to design lightweight and small but still assemble a lighting package capable of a dynamic show. Ultimately it led me to the MAC 401 Dual,” Price says. “We wanted to carry a comprehensive lighting package so we could consistently evoke the same kind of energy and look to the show whether playing in a small or large venue.”

MAC 401 Dual
The Martin MAC 401 Dual LED moving head is an innovative washlight with fast zoom, individual LED segment control, and superior color mixing system that fully blends colors at the lens so that individual source colors are not seen.

“I knew that some element of this design was going to incorporate an LED product, however I wasn't really happy with most of the LED wash fixtures out in the market, mostly because of the pixel color mixing systems they all utilize,” Price states. “I started researching to see if there were any homogenized lens color mixing LED units out there and I came across the 401 on the Martin website.”

The extra element
In the beginning what grabbed Price about the 401 was the fixture’s ability to be used as a set piece by dimming the light down to a soft glow. But it was the individual LED segment control, zoom, intensity and colors that proved exceptional.

“The individual segment control was very useful in the sense that I could take a round light and use one piece of the pie to create different looks,” he says. “The zoom is awesome, very quick and responsive for aerial beam effects, and the intensity of this light gives you the ability to do deeply saturated colors that will still punch through other high output elements of the design.

“I’m extremely pleased with the 401s. They really give that extra element that sets the show apart.”

Sainthood
Price, who designed the show for the Canadian indie band in three weeks, works collaboratively with the twin sisters who, he says, gave him a “good general concept and feel” for the lighting.

The MAC 401s are mounted on pipe at varying heights, which along with MAC 700 Profiles on flightcases suggest a visual arch, evoking the band’s ‘Sainthood’ concept, the title of their latest album. It is a multi-depth look that Price says works both two and three dimensionally.

For added ‘angelic’ feel, a MAC III Profile highlights each performer for a ‘the-heavens-have-parted’ look. More MAC 700s are located on the floor.

Christie support
Price also has praise for lighting vendor Christie Lites and account rep Peter Eady, who also provided gear for the band on their previous record. “They did a great job supporting this tour. Peter really helped me pull this together last minute. They have shops all over Canada and the US which means they likely always have someone on the ground nearby,” Price concludes.

Tegan and Sara kicked off their world tour in January and will be on the road through the summer. The tour has them playing dates across North America, Australia and Europe.