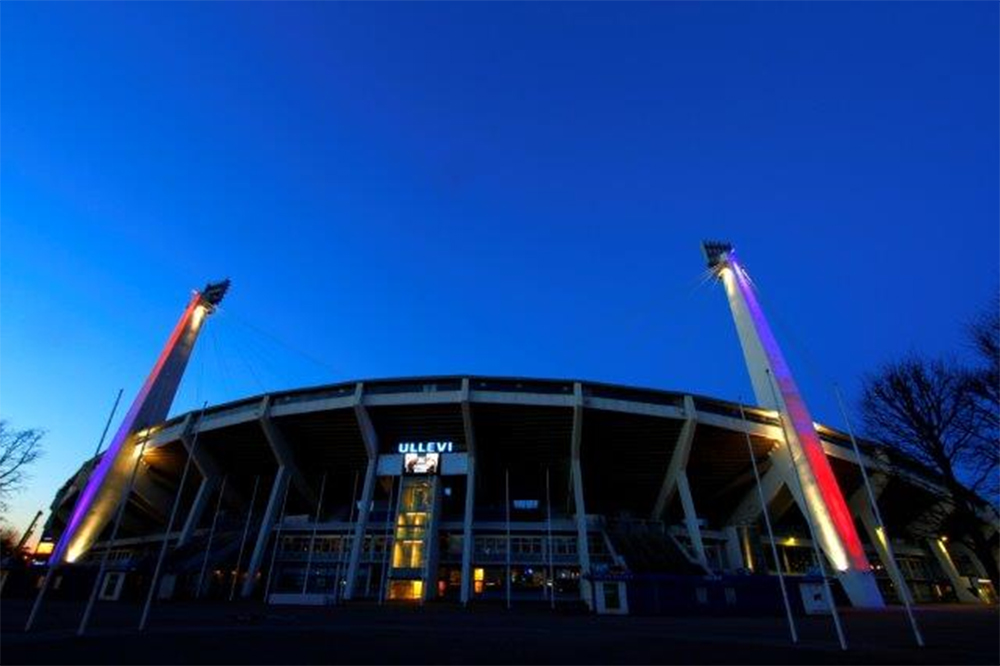 As one of the largest arenas in the Nordic region, Sweden’s Ullevi Stadium recently completed a renovation that increased its capacity from 54,000 to 75,000 people featuring 43,000 seats with another 32,000 in standing room. Located in the Swedish city of Gothenburg, the outdoor arena was inaugurated in 1958 when the country hosted one of the world’s most prestigious soccer competitions. However, as the stadium has aged it has undergone a series of renovations, the first in 1985 when the stadium’s iconic concrete pillars on either side of the main entrance were reinforced. Further renovations in 2004 brought Swedish lighting design firm Kreative Teknik AB on board to light the pillars and recently the company retrofitted their original design with six Exterior 400 fixtures.

Each pillar features three Exterior 400 fixtures mounted over 200 feet or 65 meters above the ground, shining both up and down to ensure the entire length is evenly covered. The lighting is controlled by a CueServer-system via DMX that allows for the facility manager to easily change the appearance through a simple click on the touchscreen or by a pre-programmed calendar.

Martin’s Exterior 400 now produces a much brighter and crisper light with more saturated colors when compared to the earlier models Kreative Teknik installed back in 2004. Today, the Exterior 400 line boasts a brighter light with lower power consumption of 139 W, down from the 575 W of its predecessor. Additionally, the fixture’s advanced LED technology limits downtime and maintenance costs while increasing the life span from 2,000 hours to 40,000 hours.

Marcus Persson, CEO and Owner of Kreative Teknik AB said:
“Once again Martin’s fixtures were the best choice and we are extremely proud of the result of this project. We chose Martin because of their well-documented quality of outdoor fixtures in installations and their exceptional ability to support us with spare-part handling.”

The lighting concept was designed to allow the city’s population to know what type of event was being held inside the venue, such as blue and white washes over the pillars to signal a soccer match for the local team. The color-changing technology and rugged design of the Martin Exterior 400 made it a clear choice for Kreative Teknik.

Persson explains:
“The technology has changed drastically since we first installed a number Martin’s Exterior 200 and 600 at the stadium. Almost a decade has passed and Martin’s been a proven innovator in LED technology, energy-efficiency, RA-index and fixture design. The Exterior 400 is a great example of their ability to provide designers with advanced technology to empower their creative visions.”