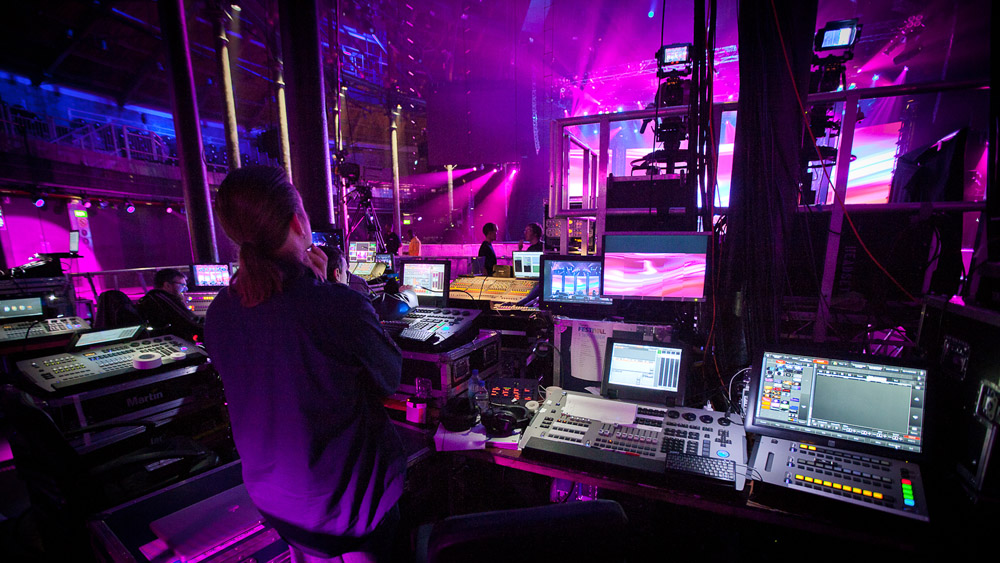 iTunes is a festival unique amongst festivals. It is a whole month of free gigs from the likes of Ed Sheeran, Plan B, The Killers, Jack White and Andrea Bocelli, hosted at one of London’s most iconic of venues, The Roundhouse in Camden, and also streamed live to iTunes by Live Nation Studios. Lighting the way was an experienced team, working in harmony, with a palette of Martin Professional products on hand to help make every show as visually fresh and exciting as the last.

Ensuring that the design worked both in the venue and for the global stream fell to Lighting and Production Designer for the Festival, Stan Crocker, who has been working on the festival for the past three years.
“This starts out very much a design project, focusing on the beautiful, historic architecture of the Roundhouse. As the design phase, focus and programming leads into the month of shows my job description shifts to more of a cinematography role, supporting the artist LDs in getting their live show to the cameras and the iTunes global stream.

“Seth Robinson has been at my side on many projects the last several years. Like me, his role is multi-faceted as he considers both the design and the needs of the camera. Alan Boyd, who is in his third year as our gaffer on the project is a designer in his own right and so everything he brings to the table is done with creativity. Darragh McAuliffe and Dave Farmer are new to the team this year, and they bring great talent and skills; Darragh on the M1 Console dedicated to the stage and Dave on the Maxedia Broadcast server. Richard White's role is multi-faceted; he moves between overseeing the White Light equipment package and backing up the gaffer position. The collaborative process starts with this team and its relationship to the festival's other departments. That process grows to accommodate the visiting LDs and content folk as we integrate their creative with ours.

M1 drives MAC rig
A combination in excess of 40 MAC 101's™ and MAC Auras™, plus eight MAC III Performences™ and control via Martin M1™ consoles helped to achieve this.

“The 101s and Auras have been wonderful,” says Seth Robinson, Lighting Programmer, Key Light for the Festival, who operated the house system on a day-today basis. “They allowed me to do the rock ‘n roll looks that I needed in the room. They’re fast, bright and reliable - and they’re tiny! The Auras in particular have impressed me - Martin has crammed so much into something that’s only slightly larger than a 101.

“This is the second year we’ve used The MAC III Performance for key lights. We needed something we could focus quickly without climbing, particularly for our support acts who only had 20 or 30 minutes to come in, check things and get out… This meant we only had that amount of time too, so I used the MaxRemote™ app on my iPhone, which is an elegant and efficient way of quickly setting up the television key lighting.”

Bomb proof controller
Programmer Darragh McAuliffe was on hand to help guide visiting LDs through the general look of the stage, allowing them to concentrate on giving the show they would normally deliver for their artist.

“I lay out what we call a ‘busk’ page,” says Darragh. “It gives options for colors, gobos, positions, movements, intensity chases and intensity groupings for visiting LDs. A lot of the support acts had nothing prepared, so we set these elements out on the desk for them in a way that they could easily interpret for themselves. The M1 has been really helpful for that, and it’s pretty much bomb proof.“

“It’s my job to throw a picture, a moving image or a texture on the screens to supply some depth for the cameras,” he says.

“This was the first time I had ever used the Maxedia or the M1,” he recalls. “But I found them great. The Maxedia is really easy to use and it’s been totally reliable. There was a fair amount of ‘busking’ involved during the festival, with the team putting together a cohesive lighting/video show on the fly. With other media servers it’s very easy to leave, for instance, a scale function running on the lighting. With the Maxedia, that doesn’t happen. Everything you do is recorded as a cue, using all the parameters of that cue, so what you see on the screen when you recall is exactly what you are going to get.”

“It’s been fun, day to day, to see people discover the M1 for themselves,” concludes Seth. “Having it available for the lighting designers du jour to use has been very rewarding and I think we have a bunch of converts.

“As for support, David Stewart from Martin Professional UK has been with us for three years as our on-the-ground support and he and the rest of the team really came to the table this year for us, supporting us with some very valuable equipment in terms of the feasibility of the show. That has really been appreciated by us. They have been gracious in seeing what we’re doing, being enthusiastic about us and supporting us in that.”