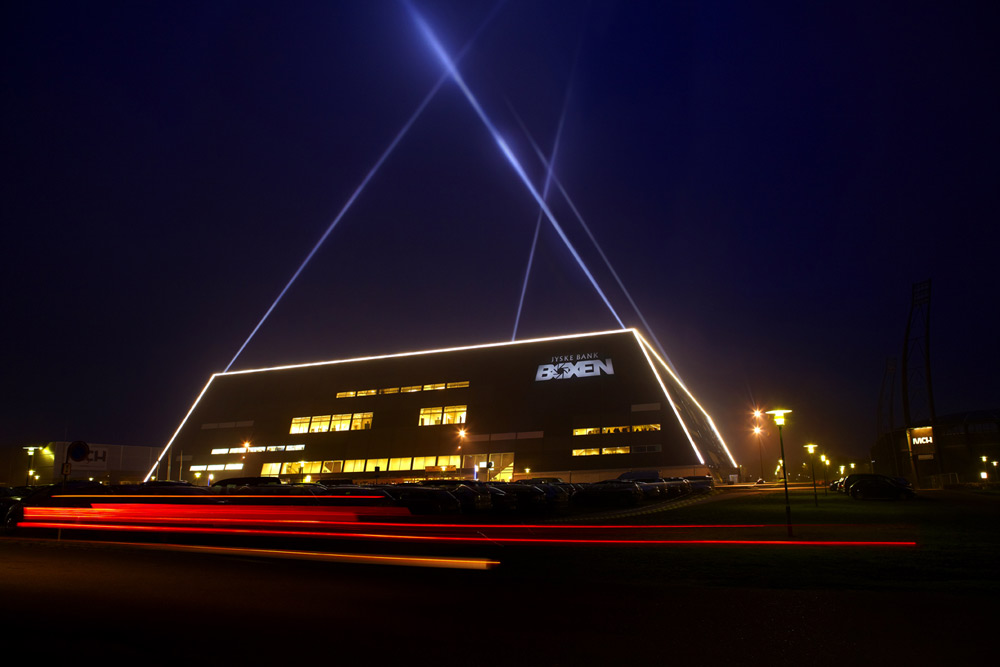 The provincial city of Herning in the heart of Denmark’s Jutland peninsula is home to Jyske Bank BOXEN, which, since opening in 2010, has become one of the country’s premiere venues for concerts and events. The 15,000 capacity ‘BOXEN,’ Denmark’s largest indoor arena, opened with a Lady Gaga show in October of 2010 and hasn’t looked back.

“The whole idea was to create an arena of international status and capacity and MCH wanted a lighting scheme that would express this while creating a landmark for the entire region,” states Anders Birch, Sales Manager at Martin Professional Scandinavia.

Forgoing the more typical static sign, MCH chose to dynamically project the Jyske Bank BOXEN logo onto the arena’s façade using a Martin Exterior 1200 Image Projector™ with customized gobo. The logo gobo, which can be animated and change color if needed, was created with a distortion that fits precisely with the angle of projection. The Exterior 1200 Image Projectors are controlled via a PC-based Martin M-PC™ controller and are RDM compatible for quick and remote system feedback.

Both the horizontal and vertical edges of the arena, 520 meters in total, are lined with LED strips in static white with customized reflectors (the reflectors were designed by Martin Professional’s Design and Application department). Finally, in each corner of the arena’s roof are FALCON STATIC ARC white 4000W Xenon architectural fixtures in static white that beckon guests on show day. The sky trackers are angled to follow the contour of the façade. The Jyske Bank Boxen logo is projected onto the façade each evening while the LED strips and sky tracker lighting is used when there is a concert or another event in the arena.

The lighting installation was completed in October and the client is reportedly happy with the result. “We have had a good relationship with MCH for a long time,” Birch concludes, “and although the project was quite complex because of the various angles between the facades and the roof, we managed to supply an impressive installation that the customer will benefit from for years to come.”