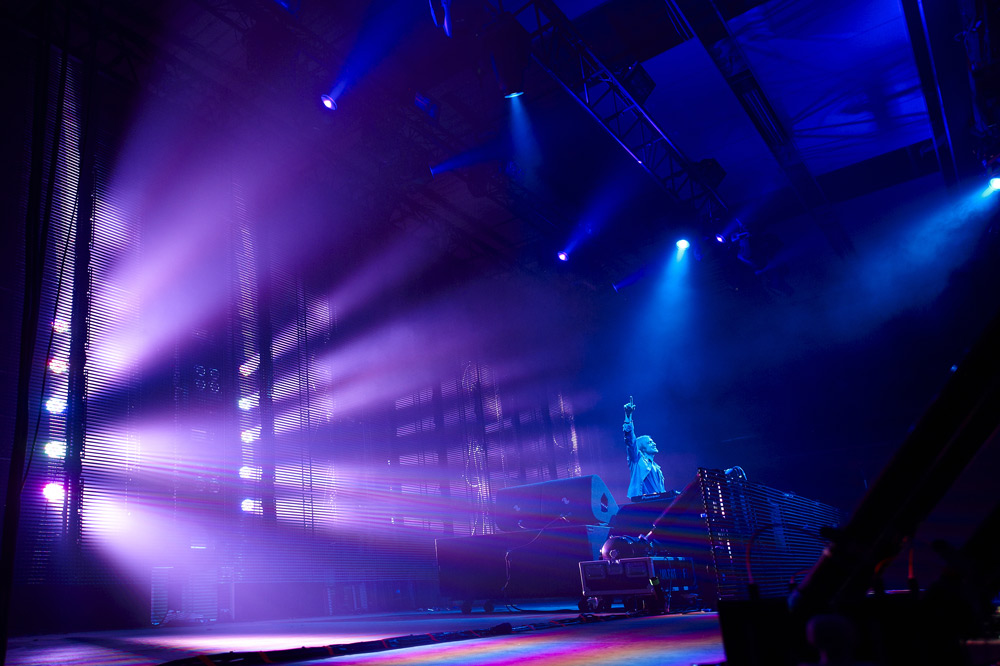 “What an amazing little fixture. I absolutely loved the 101's! They stood up against my rig of MAC 700 wash and spots - really fast, good color and a fantastic beam with great throw distance. I am really impressed,” he stated.

Mikeyray says that he and Pilot Vision (video screen software designers and co-designers on the show) had been looking for a small, fast and bright LED fixture to mount behind the onstage video screen, something with a tight beam that emulates a big pixel to match the look of the show. The MAC 101 fit the bill. “It added that extra element to our visual content.”

Mikeyray mounted 20 MAC 101s behind the video screen in four columns of five fixtures each with another 28 in the room as beam washes. As Guetta embarks on a full production tour in April of 2011, Mikeyray wanted to see how they performed in both situations.

“I have to say they excelled in both,” he stated. “I loved having them behind the screen as they matched the low res look of our content and the beams were fantastic. Also, the speed took me back to the days of scanners, which is great for this sort of act.”

Mikeyray’s design also included 12 MAC 700 Profiles™ in the roof, 26 MAC 301 Washes™ in the roof and onstage, and 26 Atomic 3000™ strobes with Atomic Colors™ scrollers in the roof and mounted behind the screen. Lighting gear was supplied through Unlimited Productions from Holland with the MAC 101s supplied via Swedish rental company Woodlite.

Mikeyray thanks Pilot Vision as well as Bart of Unlimited Productions and crew “for having everything set up perfectly as we had just taken three flights from Guadalajara, Mexico and came straight from the airport,” he says. “And thanks to Martin for the opportunity to play with the 101s.”