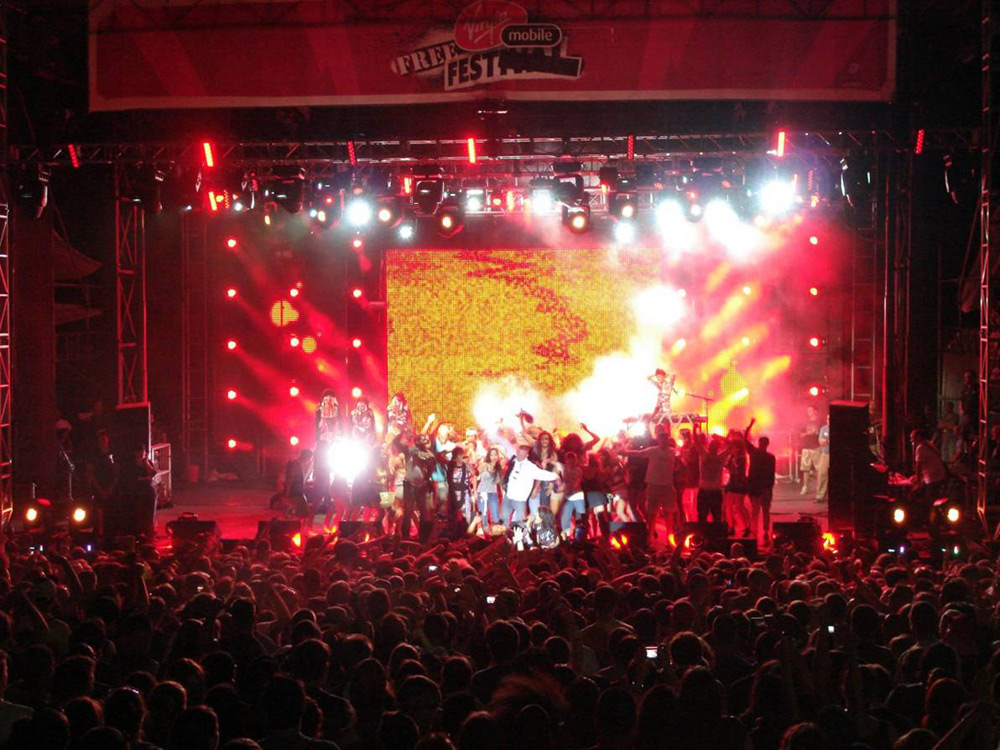 “Throughout the whole design process, I wanted to create an upstage grid of fixtures but I found myself having to choose between quality or quantity,” Chmielewski explains. “As with most festivals, we had a limited budget and we had some weight restrictions on the stage. The 101s were the perfect match of both quality and quantity. They only weigh 8lbs each so weight was not an issue and they were really bright.

“Every part of the fixture helped create an interesting effect from the beam angles to the exceptionally fast colors, and we were able to hit effects at 180BPM on the pan/tilt. The best part is that they were very inexpensive so I was able to put 96 of them on the show.”

Grid of 101s and more
Chmielewski’s primary purpose was to create an upstage wall grid of fixtures and placed the 101s on truss ladders to create the look. “Once we realized that we were able to add so many within our budget I started placing them on the overhead trusses as a traditional wash light as well.”
Forty MAC 101s were also used on the Dance Forest stage and aside from a few MAC 2000s were the only fixtures in the design. “I was a little worried looking at it on a scaled drawing because the fixtures are so small,” Chmielewski says, “but from the moment we fired it up for the first time, I knew it was going to be more than enough for the stage and the surrounding areas. There are a lot of LED fixtures on the market right now but the 101s definitely have a distinctive look and are unrivaled in their speed and brightness, especially once you factor in cost.”

MAC 101
Remarkably small and super light, the MAC 101 is an LED moving head wash light that recently launched at the PLASA exhibition in London and debuted on the MTV Video Music Awards. It features a tight and very bright beam, rapid movement and calibrated colors with a low price tag. It is small enough to fit inside a piece of truss and weighs only 8.2 lbs (3.7 kg). Exceptionally easy to rig, power can be daisy-chained between fixtures for less cable mess and hassle.

“Martin really put some thought into the design of a low wattage fixture by incorporating the same power system they use on the Stagebars, which were also used in the design. This allowed us to daisy-chain the fixtures and made our build process very quick and saved a lot of cable and circuiting,” Chmielewski says.

“We had absolutely ZERO problems or issues with the 101s,” he continues, saying the fixtures were even bright enough to leave on during the day for a twinkle effect. “Once I realized just how fast they could move, I really wanted to use it for what it was worth so I really put a lot of stress on the fixtures in programming to create effects like you’d get from a moving mirror.”

A team effort
Chmielewski concludes by giving praise to his team. “I had an amazing team onsite for the show which would not have happened without them. I have to give big thanks to Nicholas John, Geoff Whitaker, Mike Kordel and Mark ‘Supercal’ Callahan.

“Lastly, I can’t thank the guys at Main Light Industries enough for their continued support to me and Digital Media Designs. I can say that I would not be able to do what I do as a designer without them and their uncanny ability to always be on the forefront of technology and their meticulous ways in maintaining and renting gear.”