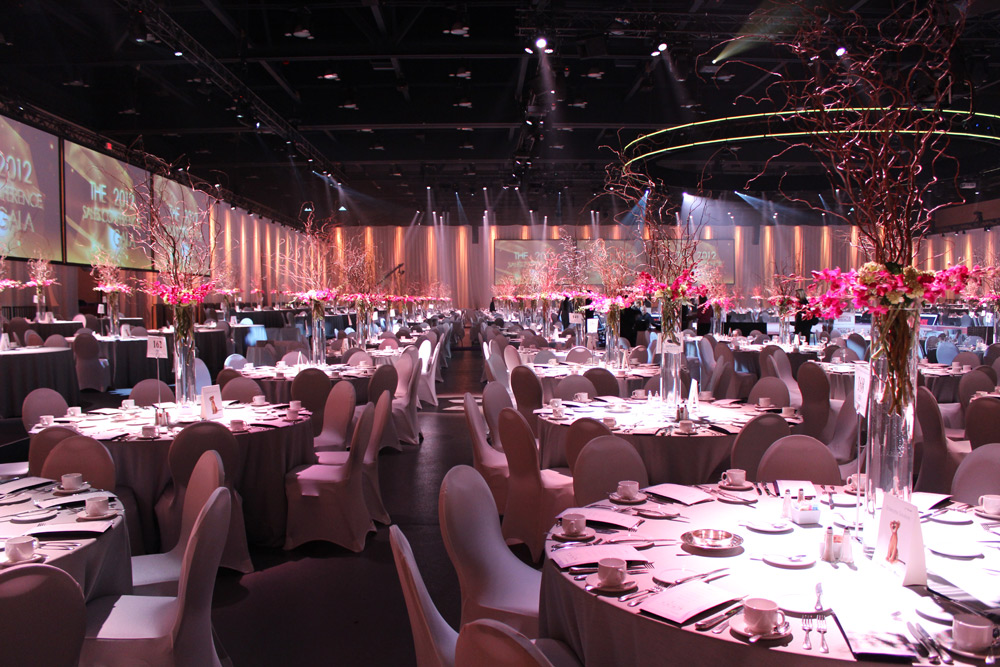 “From the onset, as with most events of this kind, one of the biggest challenges is trying to transform the look of the room from a business session to a gala with very limited time,” explains McKinnon who works for Electric Aura Projects. “I decided early on that I wanted to pinspot the tables using MAC 101 fixtures.”

Base lighting with complements
The 101s were placed throughout the room as per the table design with a few spares thrown in for last minute table additions. The 101s provided the main look for the room with complementary light from MAC III Performance™, MAC 2000 Performance™, MAC 2000 Wash™, MAC 600NT™ and MAC 250 Entour™ fixtures. All of the Martin lighting gear was supplied by Christie Lites.

“The MAC 101s were versatile enough to allow me to make last minute color and table position changes without involving lifts and crew,” McKinnon states. “The room was designed to be in the round with branded carpet so getting lifts out for the changeover would have been a very big problem. Using MAC 101s as my base and complementing them with other fixtures allowed all changes to be made via the console and not physically.”

Mixing business with pleasure
The conference started with a business session that ran a full day followed by a dinner and gala event the next day. “I decided to use TELUS brand colors for the business session, seeing as it was very much about the show content rather than the room itself, McKinnon says. “I mixed a white color with the 101s and just varied their intensity for the day.”

The Gala the following day was an Academy Awards-type event and McKinnon transformed the room by simply changing the 101 color palette. “During the Gala, I varied between a saturated sepia type color, Gold and then a lighter salmon for meal courses,” he explains. “One of the big moments of the Gala is the transition into the after party. At one end of the room, the entire drape line was kabuki’d while the screens travelled left and right to reveal the band stage. More 101s provided the base lighting for the after-party stage. It really was incredible how bright they were. I ended up having to run them at about 50% as they were just too bright for most of the color choices.”

Calibrated ease
The MAC 101 is also about ease of use, from its light weight design and easy-to-produce looks to flexibility in control. McKinnon appreciated the ease of changing from the fixture’s RGB raw control mode to RGB calibrated, and the effect it gave. He comments, “With that many fixtures, I had a couple of small discrepancies color wise on a few of the tables when I was in white and in RAW mode, so I changed the control mode from the console to RGB calibrated and all of a sudden the entire room was perfectly even!”