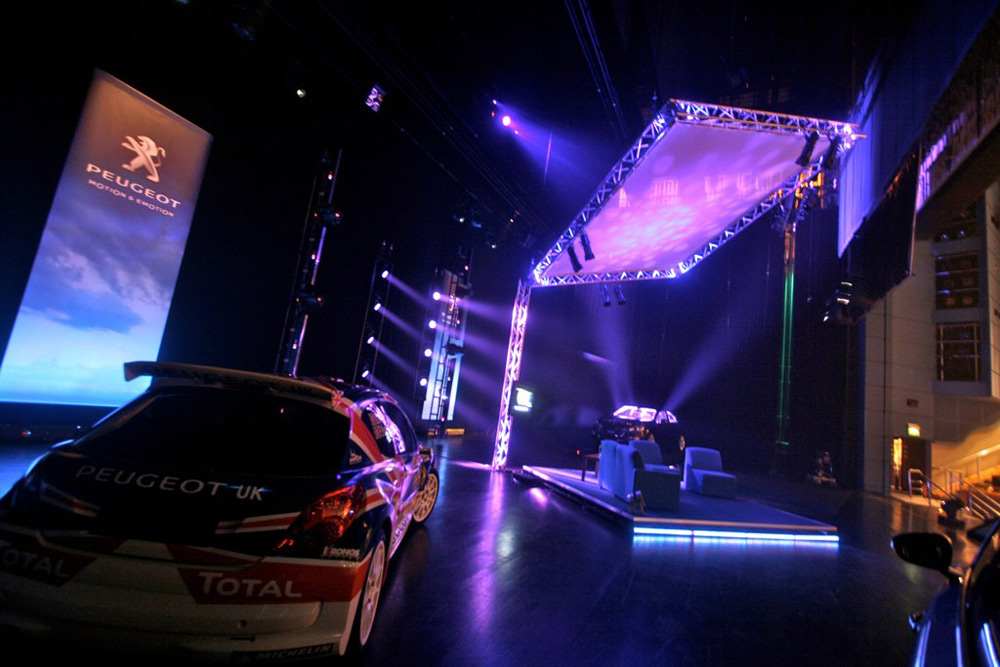 Peugeot UK decided to preview their new midrange saloon and estate range at the ICC in Birmingham in order to give their dealers a chance to view the new 508 series models first hand before the public launch of the car.

Production company AddingValue were given the brief to produce a spectacular reveal for the car and turned to Martin Professional’s compact MAC 101 moving head wash. The reveal was to be followed by an on stage presentation by various Peugeot senior staff and would include interactive demonstrations and video presentations.

Top Gear
Production Manager Guy Ferguson from AddingValue contacted LD Paul Moorhouse and asked him to design the lighting for the dealer launch, having worked with Paul on previous projects for Peugeot. The brief was to create a ‘Top Gear’ style studio look on stage, with lights visible to the audience, and to light the reveal of the car itself. The reveal was to be from a laser fitted hydraulic lifting platform, which would lift the car and spin it through 360 degrees.

MAC 101 and MAC III Profile
Paul had seen earlier in the year, at PLASA, the Martin MAC 101™ compact LED units, and was keen to incorporate these into the rig, both for their brightness but also for compact size and speed. During conversations with Martin Professional’s Dave Stewart, Paul also became interested in the Martin MAC III Profile™ moving head. Lighting was supplied by London-based rental company Storm Lighting.

The stage design had two large projection screens mounted at the very downstage edge of the stage. Paul particularly wanted a bright, fast moving spotlight with powerful effects mounted below the screens to dazzle the audience at the start of the reveal, and to be able to hit the car once the reveal was complete.

Peugeot praise
Paul’s design was based on all units being visible, with the MAC 101’s arranged at the rear of the stage on metal framework in a grid fashion in full view. In addition, two large vertical ladders were hung at the rear of the stage containing MAC 250 Entours™ and LED striplights. MAC III’s were rigged below the projection screens. Overhead lighting was provided by MAC 700 Washes™, MAC 700 Profiles™ and MAC TW1’s™, along with Source 4 profiles. The MAC 101’s in particular were singled out for praise by the client for their brightness and speed.