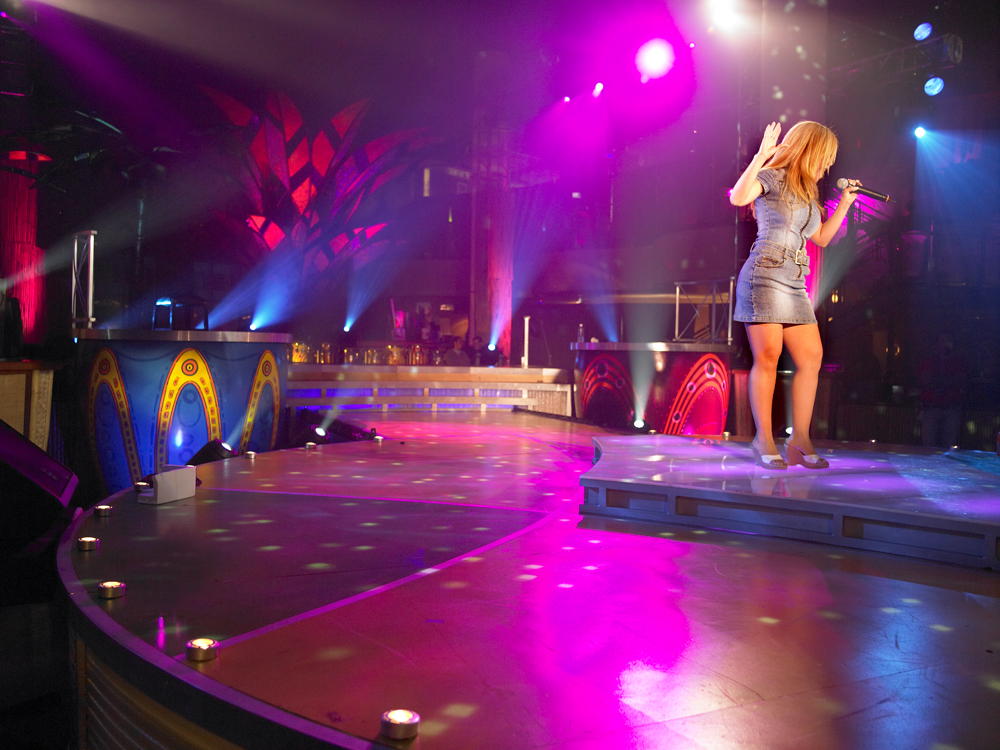 Telemundo's performance based reality series, "Nuevas Voces de America,” a Latin ‘Idols’ show, airs on Sunday evenings to top ratings in the Hispanic community. In fact, Voces even beat out the Grammy’s among Hispanics and pulls at least a 70 share every time it airs.

BML Lighting, Inc. of has supplied 20 MAC 550 profiles, 14 MAC 2000 Profiles, 5 MAC 2000 and a handful of other automated lights for the show, which began in February and runs for 15 weeks. BML supplied the entire lighting package including trussing. Eric Todd of BML commented on their role, “We worked with the production staff to assist with determining what the most ideal fixture complement would be for a venue of this configuration.  We jumped at the opportunity to introduce the 550's to this production. We were very pleased to be a part of this production, and in particular a production where things went so smoothly during the entire run, for both parties. It was a problem free experience. In shooting a show like this, the equipment reliability factor is essential and that was clearly the case here.  Other than replacing lamps, there were no fixture issues in over 15 weeks of constant use."

Shot at Bango’s Cuban Café at American Airlines Arena in , the show culminates in a two-hour grand finale to air on May 29th, where famous musical guests will perform and the "New Voice of America" will be crowned.

Lighting designer is Andy Futo with Tod Olivieri as moving light programmer and board operator. “We’re combining TV lighting with musical event lighting,” says Andy Futo. “We use the Martin moving lights for TV lighting of the performers, as key light and as theatrical lighting in the background. We use the entire club and although there are 7 cameras and it is 360 degrees around, we’re creating the mood in the nightclub without revealing too many lights.

As one of the first in south to use the MAC 600 years ago, Tod Olivieri is a long time Martin user. “The reason I picked Martin is because they’re rock steady and I think they have the best light. I liked the way Martin handled themselves compared to some of the other competitors,” he stated.

On “Voces” Tod works with the show producer and director to get unique looks. He has a number of general looks he uses for the myriad of contestants – a fast, medium or slow ballad look depending on the song. There is also an elimination look and a 360 degree look for each performer. As the number of contestants decreases however, Tod programs individual looks for each song. He commented, “I’m using the 2Ks for the top light up in the air and using the 550s on the ground. The 550s have performed well. It’s the first time I’ve used them and they really outdo the 500.”

With as a backdrop, "Nuevas Voces de America" contestants undergo intense coaching that prepares them for the weekly music challenges. The show's host, Latin music mogul Emilio Estefan, and other celebrity judges, choose the most gifted contender. The winner of the competition will receive a grand prize that includes $50,000 and an exclusive recording contract with Sony Music worth $200,000.