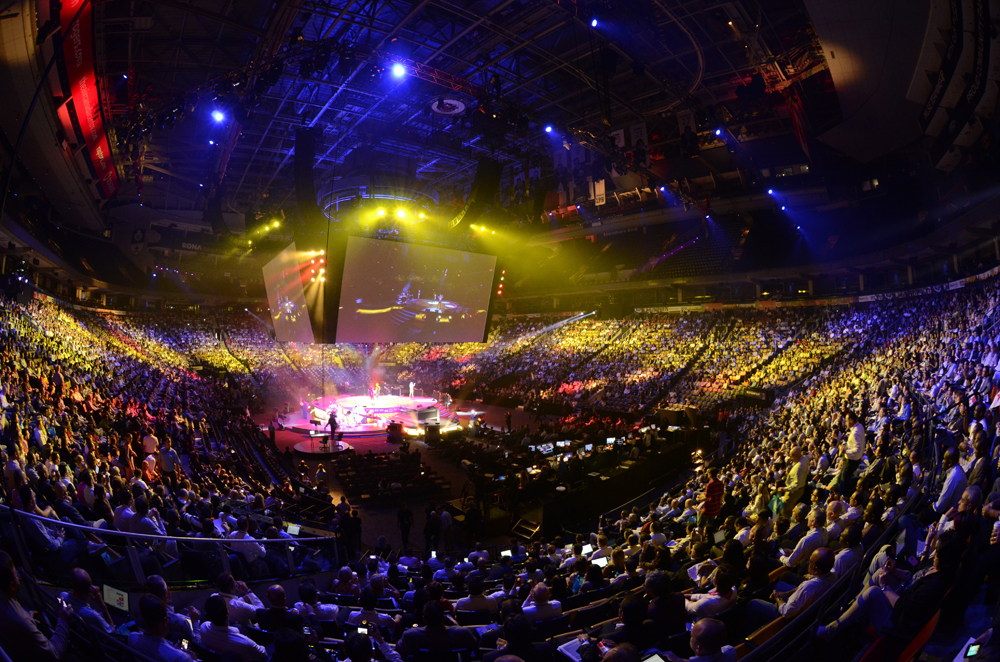 When Microsoft holds an internal meeting let’s just say they tend to be on a larger scale than that of your average company. Thousands of attendees, opening entertainment by Cirque du Soleil and hundreds of moving lights attest to that.

Microsoft events such as MGX and WPC do more than communicate information however; they instill a sense of excitement and pride in working for one of the world’s most successful companies and lighting is an essential element in creating the right atmosphere.

Immersive feel
“For house lighting we replaced 360 Source Four PARs with 160 MAC Auras at Microsoft Global Exchange and the end result was miraculous,” stated Fabian Yeager of Yeager Design. “The flexibility of using an automated fixture as a house light was huge.”

The MGX show lasted 6-8 hours and rather than have the audience languish in the dark for half the day, the Aura house lighting allowed Fabian to keep the audience illuminated in a soft level of lighting without blinding them.

„By color-matching the Auras with the stage level, the venue became an immersive environment. It also looked wonderful for the reverse camera shots and brought the audience into the realm of the show,“ Fabian said. „Having a dynamic color changing light in the house light position also allowed us to highlight Microsoft teams in a different color when they were called out for special recognition.“

Fabian also used the Aura’s unique dual optical system to produce eye-candy effects on screen surrounds and to light ambient smoke. He also put them in backlight LED mode that the camera could look into for an extra sparkle.

Real white
The Aura’s ability to project authentic warm and cool shades of white as well is a feature Fabian found quite useful. He comments, “The added white LED in the Aura is a dream. I knew I needed to project a real white, not a purplish white, and I was a bit nervous about the Aura’s capablilty to do that so when I got on site the first thing I did was put the Aura’s in all white and I was amazed. It really projects a true white. Having that white circuit option gives you another design tool to use.

„Using the Aura just made more sense. As a designer, you don’t blow out the budget and you get a highly versatile light. You acheive a cost savings in labor, power and economy of units to help offset the price difference with a conventional system.“

WPC, held at Air Canada Center, gathered 15,000 Microsoft partners and staff from 130 countries to connect and learn about the Microsoft roadmap for the coming year via speakers, presentations and demonstrations. Here, Chris used nearly 500 Martin fixtures including 226 MAC Auras, 60 MAC 2000 Profiles, 60 MAC 2000 Washes, 60 MAC III Performances, 30 MAC 2000 Wash XBs and 12 MAC 2000 Performances in a rig that any rock band would be proud to have.

Again, one of the main roles of the Aura was as a house light replacement. Chris states, “We used it as an effective audience wash, and as the show was in-the-round the audience made for a nice scenic background. We also used it as a floodlight surrounding the stage and often used it in situations without projected light like in a linear line in aura mode with the background glow. It made for a good match with the video content and looked good on camera.”

Winner of the 2011 PLASA Award for Innovation, the MAC Aura is unique in that it is the first LED fixture to combine multicolor LEDs with a backlight color mixing system that can be mixed and matched for a new palette of looks.

“The duality of the Aura is very useful,” Chris continues. “With the Aura, there is always something interesting and its low price point allows for use in big numbers as a house light wash. And with the color changing and effects possibility – it just gives us more flexibility. We’re also saving power by not using a lot of 1Ks and parcans.”

Christie Lites
Lighting rental specialists Christie Lites, who handled all aspects of lighting, rigging and media servers for the events, purchased 2000 MAC Auras last year for their many rental locations across North America, and have kept the wash lights busy ever since.

“The Aura provides so much flexibility compared to PAR house lights and has really become a house light of choice,” says Rod “Red” Gibson, Sales Engineer at Christie, adding that not only are clients getting a better visual look, they’re saving money at the same time. ”We save on power consumption while eliminating racks of dimmers and we save on labor too by not having to climb up 80+ feet to focus each lamp.”