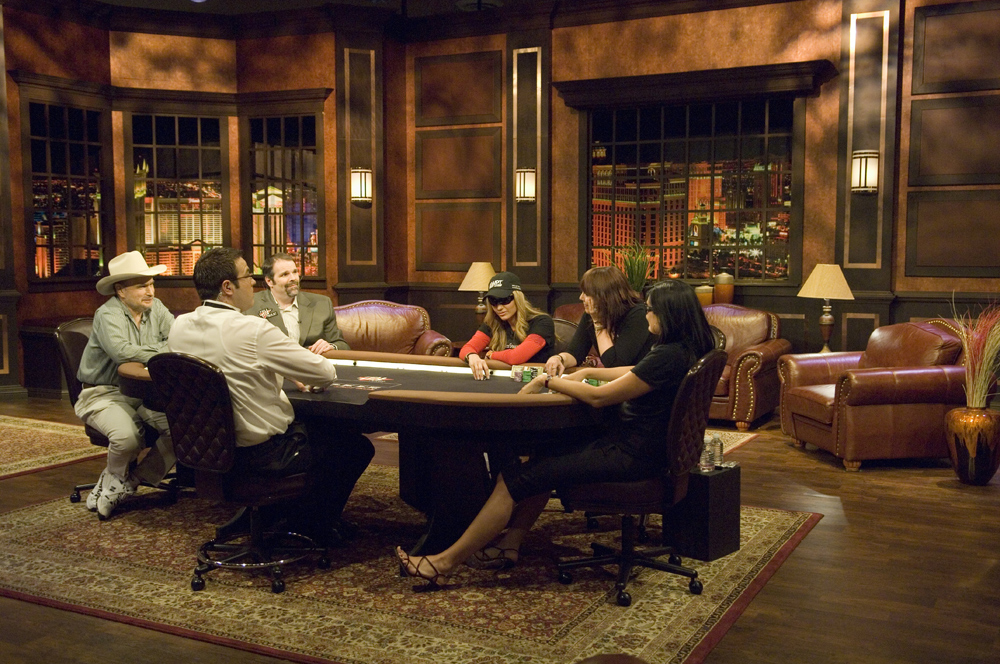 Poker’s popularity has skyrocketed in recent years with televised poker tournaments plentiful on late night television. NBC’s “Poker After Dark” and GSN’s “High Stakes Poker” are two such programs, both popular high-roller tournaments that pit some of the world’s best poker players against each other.

Show Partners Innovative Show Design (www.ShowPartnersISD.com) of Lake Mary, Florida, led by Artistic Director Christopher Runnells, handled all lighting, scenic design and implementation for both shows while parent company Show Partners took care of technical production and crewing. Both shows were shot back to back at the South Point Hotel and Casino in Las Vegas over a three week period in May. Lighting Designer for both programs was Justin Garrone of Show Partners Innovative Show Design who turned to Martin’s MAC TW1 tungsten washlight for a myriad of specialty shots. Lighting direction and programming was handled by John Lotz.

NBC’s “Poker After Dark”
In “Poker After Dark” the world's best poker players and the game's biggest personalities get together to play in a high-stakes, winner-take-all tournament. “The concept for the lighting/scenic design was to create a high roller suite that overlooks the Las Vegas Strip,” Justin Garrone comments. “Using a primarily static rig, the lighting is meant to play up the subtleties of the room to give it a more realistic feel and push the envelope of ‘after dark’ with a theatrical flare.”

In past “Poker After Dark” shows Justin used all conventional instruments. “For example, to back light the window seats I used a ParNel with R47 that had ThermaShield and a gel extender. But with them running close to full intensity for 18 hours a day, we were constantly changing gel. I had played with the idea of using an LED fixture for the back lighting of the window seats, but with specialty shots we would be using these as a back light on the host and the LED would not have provided the correct color temperature. The MAC TW1 accomplishes this task perfectly, allowing us to change color, dim intensity, zoom and hold a constant color temperature.

“After each tournament we went into an ever changing specialty vignette shooting, which is used in a director’s cut program. It required us to light portions of the set differently than the actual tournament lighting on the spur of the moment. In the past, we used conventional fixtures that needed to be constantly refocused, re-geled and/or moved. The TW1’s that were used in the tournament portion to light set elements were now repurposed as key, fill and accent lighting. With these, it allowed for time and budget savings.”

After shooting ‘Poker After Dark’ Justin was so impressed with the versatility of the fixture that he moved them onto the rig for ‘High Stakes Poker,’ which was originally speced for conventional fixtures. Justin also used Martin MAC 600 washlights on “Poker After Dark” for a specialty show opener.

GSN’s “High Stakes Poker”
In “High Stakes Poker” legends of the poker world are joined by elite players in a high rollers game of ‘real’ poker where the buy-in is at least $100,000 with up to millions on the table. “High Stakes Poker” is shot in “a more universal type suite that can be mistaken for any resort in the world. Again using a primarily static rig, the lighting is less dramatic but still designed to add life to the room,” Justin says.

Justin comments that the MAC TW1’s color temperature and richness of color are useful features and calls the TW1’s near silent operation “a great feature of the fixture, especially for a TV set. We were constantly impressed with the near silent operation as well as the even field of color.” The Martin fixtures are located on a truss, often strategically placed in a circular configuration in order to get light wherever needed on the set. The Martin lighting gear for both shows was supplied by CYM Lighting out of Palm Springs, California.