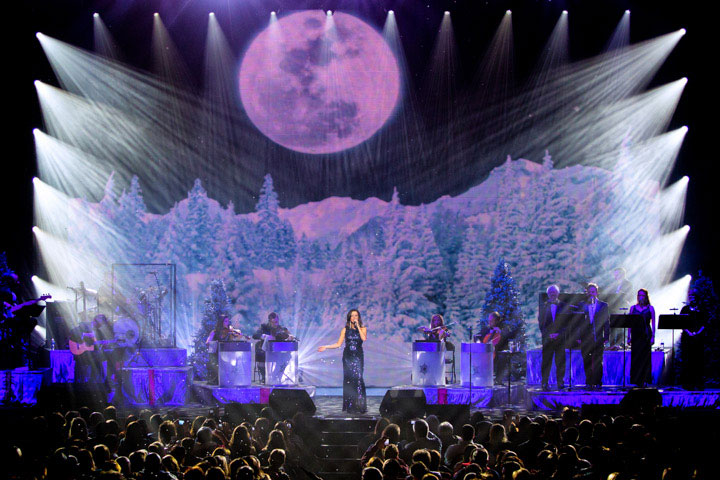 “After getting to see a demo of the MAC Vipers against other fixtures from different manufactures, I knew they would be the right fit,” Trevor said about Martin Professional’s award-winning 1000 W spot. “The small profile and incredible output was what I needed to cut through and stand out against the LED wall while still keeping a very clean-looking rig.”

Utilizing a 3-truss configuration and floor package, supplied by Christie Lites, the entire rig with the exception of band and set lights were Vipers, says Trevor. Vipers were placed on the mid and upstage trusses. In addition to the upstage truss were two vertical rope ladders with seven Vipers each to help frame the LED wall. To light the band and set Trevor used 28 MAC Aura wash lights. “The Aura’s narrow zoom and color gave me the separation I needed to light the band and set differently,” he comments.

“The Viper has great color saturation with a very minimal effect on its output,” Ahlstrand says. “The gobo selection in this light is fantastic. It gave me many options of radial patterns, breakups, as well as textures for the stage without ever seeming redundant. The gobos always stayed clear and crisp through the light’s large zoom field without ever feeling lost.”

A large LED wall was vital in this design for the content that supported the holiday theme and music, but was even more important for the transitions made throughout the show. “The Vipers had no issues cutting through the LED wall and really made a conservative-sized rig look extremely massive. This fixture was the perfect light for what I wanted to accomplish in this show!”

Ahlstrand has special appreciation for Christie Lites’ efforts on the quick turnaround of the Viper fixtures, which they had just received in stock. “The fixtures had literally just arrived but were quickly prepped and arrived for rehearsals. I never had to swap a light on the two month tour,” he says, with special thanks to Huntly Christie, account rep Red Gibson and Crew Chief Robert Colvin.