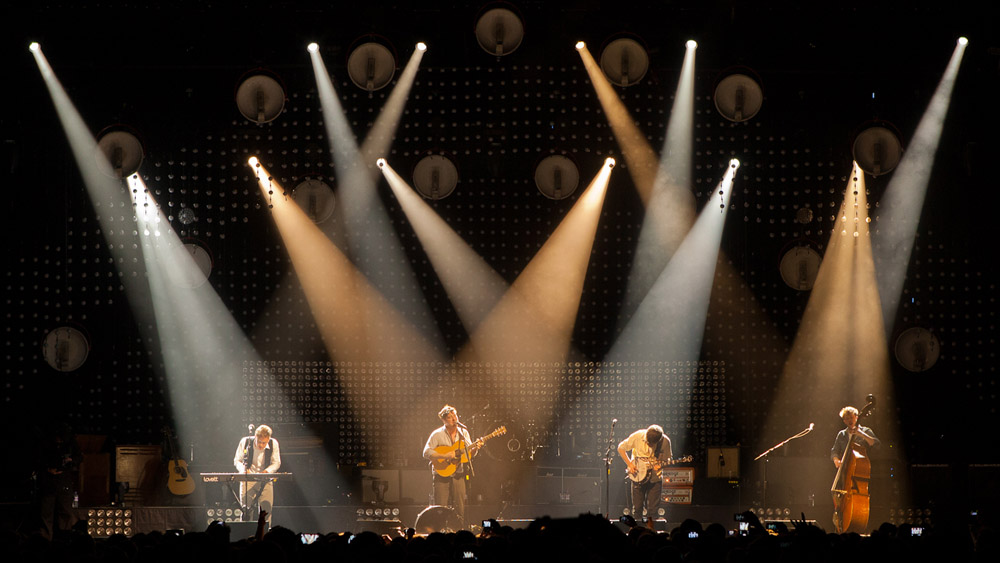 Lighting designer and operator Ed Warren of Next Level Lights turned to Martin Professional’s MAC Viper Profilesfor Mumford & Sons’ “Tour of Two Halves” (first half theatres, second half arenas), which hit dates in the UK and Ireland in November and December as a leg on their extended “Babel” world tour.

The award-winning 1000 W fixtures were recommended to Ed by Rob Sinclair, who worked as visual consultant for the tour. “He'd used them previously and recommended them due to their tungsten abilities, and their general usefulness,” said Ed, who has been with Mumford & Sons for almost four years.

“My show is very tungsten-heavy so it was important to achieve a warm CTO from the fixtures, which mixed perfectly with the many light bulbs on stage,” Ed continues. “They were also very punchy with very clear beams as well as a decent wash. Their speed, reaction times and reliability were a bonus, too. I was previously using MAC IIIs and I think Moonunit, my lighting tech, was happy about the smaller size.”

The Vipers were mounted on three main LX trusses upstage, as well as on one of the downstage trusses from which they were used for key light.

Also used on the show were 18 MAC Auras wash lights, 10 on the very downstage edge and 8 on risers behind the band. “I used these for uplighting the band members with a warm tungsten when needed,” Ed explains. “There are a couple of songs where we drop four drapes behind the band and project their silhouettes onto it. The zoom on the Auras came in very handy when achieving this look.”

All lighting equipment for the “Tour of Two Halves” tour was provided by UK-based Neg Earth.