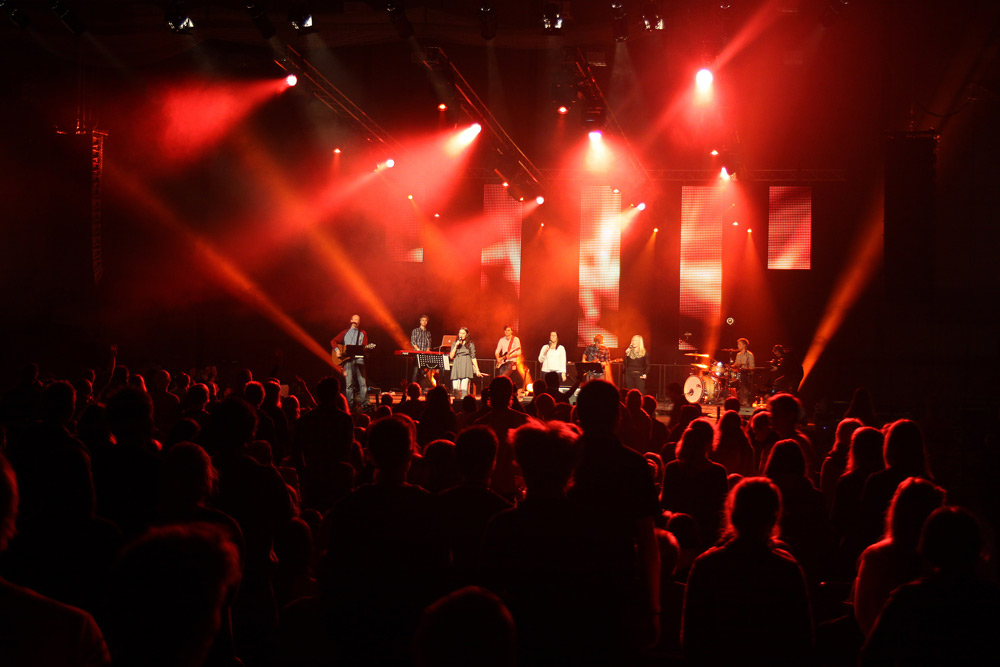 Vestad Lighting of Norway recently supplied a large Martin lighting and video screen package for Get Focused, one of the largest Christian youth festivals in Norway and one of the first events to incorporate visuals using Martin’s new 10 mm pixel pitch EC-10 LED video panels.

Vestad focuses on lighting rental for television, concerts and events and through the years has also supplied a number of large-screen video productions.

“When we were looking for an LED solution, it was important for us that it could be used creatively as well as a video wall capable of delivering crisp video images with good color and low latency,” comments Thomas Voilås of Vestad. “We’ve had good experience with Martin Professional products and support and felt that the EC-10 was a product that could fit our needs.”

Held in the city of Tønsberg in early November, Get Focused gathers around 2000 youths for three days of music and inspiration. Lighting design was by Vestad’s Steffen Stangeland with lighting design for one of the headline bands, Jesus Culture, by Robby Kurtz using a Martin M1.

Get Focused was Vestad’s first event using the EC-10 LED screen and they were eager to see if it would deliver what they expected. Video and worship text was run across two 14 m2 EC-10 LED screens stage right and left with vertical strips of LC Plus™ video panels hung from the back truss.

“We have now used the EC-10 on a few productions and so far we are quite excited about it,” Thomas says of the high performance LED display panel. “We are able to use it as a large LED screen for video as well as creative applications like incorporating them in the lighting/stage design.”

Creative content onto the screens came from a Martin Maxedia PRO™ media server with the EC-10 controlled by a Martin P3-200 System Controller™ fed with SDI video signal.

“Because this event was indoors, we put the processor to as little as 10% light output and it still was more than bright enough,” Thomas says. “Rigging the screen was practical and easy as well. We are very satisfied with the low latency of the P3 system, as well as the fact that we have full control over the whole screen from the system processor.”

Rental company Audiopol Live was technical supplier for the event with Vestad a subcontractor of the LED and lighting gear. Other Martin gear on the event from Vestad stock included 16 MAC 700 Profiles™, 8 MAC 700 Washes™, 8 MAC 101s™, 8 MAC 350 Entours™ and 6 MAC 250 Beams™ with Jem K1 Hazers™ used to create the mid-air haze canopy. A Martin M1™ desk was used for lighting control and Steffen did his preproduction design using Martin ShowDesigner™ 3D visualization software.

“We were happy for the good cooperation on this event and for the possibility to supply lighting and LED screens to Get Focused 2011,” Thomas concludes.