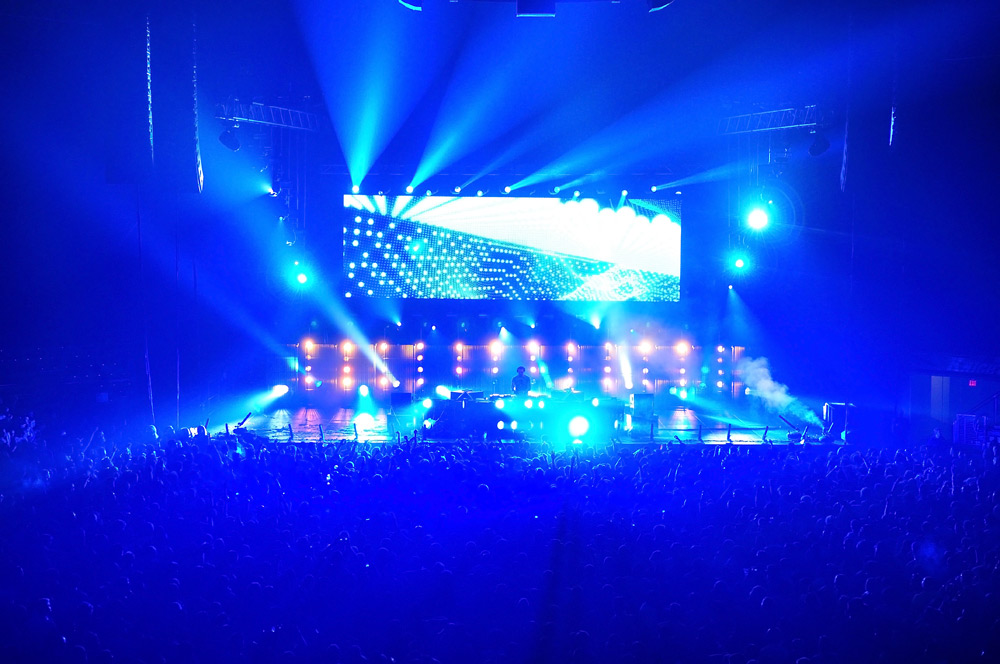 As the creative director for international producer and DJ sensation Tiësto, Koen De Puysseleir of Belgian company Light in Motion is in charge of everything visual during a Tiësto production. Recently, Koen turned to Martin Professional’s new EC-20 LED display panels for a new design look on Tiësto’s current tour.

The tour, produced by Insomniac Productions in the US with the EC-20 screen supplied for several shows by Zenith Lighting, continues through May with a number of US and international shows.

EC-20: Let me count the ways
Koen, who is in charge of the overall stage look and feel, also handles lighting and video control, as well as special effect and laser control. He chose to use the EC-20 for several reasons, acknowledging, “The quality of the screen, its brightness and reliability. It looks amazing,” he says. “Some people have even asked what pitch it has and they wouldn't believe me when I said it’s 20mm.”

Koen mentions availability as his second reason for using the EC-20. “Martin's network of rental companies is exceptional and I know over the course of a year almost everyone will have a decent stock to facilitate my show,” he states. “A third reason is the fact that it is brand new. Incorporating brand new equipment in your designs almost guarantees that it will be 100% functional and with good output.”

P3-100 video processor
Koen says there are many more reasons why he picked the EC-20 over other screens, but one that really stands out is Martin’s advanced video signal processor, the P3-100 System Controller™. All media content across the panels is driven through the P3-100, which treats LED screens like lighting instruments through direct DMX control of brightness, color, pixelmapping and more. The P3-100 also makes setting up an LED screen straightforward and intuitive.

Koen comments, “I really think the P3-100 controller is one of the key reasons for the ease of use with this screen. The software is so easy that almost everyone understands it instantly, and if I do run across someone who doesn't understand it, I can easily do it myself within a couple of seconds.”

The DJ (and EC) difference
Koen explains that DJ concerts are quite a bit different from other types of shows in that one person is in a fixed position instead of a band or performance where the act itself is 80% of the show. Also, he says, a Tiësto show has no running order or set list like most other concerts, which can be a challenge.

“Tiësto likes to feel the crowd and play accordingly,” comments Koen. “In my opinion, this is a huge contribution to the show but does make it hard to create a show that follows him at every moment. This is why we chose to keep the entire visual aspect as centralized as possible and to combine as many aspects as possible to my position.”

For the tour’s new design, the EC-20 screen is placed centrally behind the artist with Martin LC Plus™ 2140 LED panels on the floor behind him. The EC-20 screen size varies depending on the size of the show from 2 x 6 meters up to 5 x 15 meters but is always in a 3 x 1 ratio.

Brightness, speed of setup, reliability, image quality and vividness of colors are specific features of the EC-20 that Koen states as exceptional. He also says that with the quick reaction time of the screen, he has never had lines or hum like with some other systems.

“As always, the screens have been perfect,” Koen says. “This was really for two reasons - the quality of the product and the quality of the crew and company providing it. Thanks to the right crew and their understanding of what I want, the EC-20 is the ideal choice for my shows.”

Insomniac Productions
Los Angeles-based electronic music promoter Insomniac Productions produces the Tiësto shows in the US. Insomniac’s Jeff Kenney, who may assume a number of roles on Tiësto shows from tour director to production manager to stage manager, states, “We have been using Martin products for a few years now with Tiësto and some other big dance artists.” Last year, Insomniac did around 50 shows with Martin LC panels - including some smaller club gigs.

“The EC-20 has been superb so far. I love the new system because we often load in arena shows the morning of a show, and this stuff goes up fast!” Kenney states. “The EC-20 takes less space on the truck, goes together super quick, and is just a gorgeous image! It is also a good plus that a single processor works across the entire system.”

Zenith Lighting
Insomniac must source their rentals in every market, which Kenney states as his toughest job. The EC-20 panels for many of the Tiësto shows have been supplied by Zenith Lighting out of Orlando. “They have worked with us extensively in the past and carry a good quantity of Martin products that I need,” Kenney says. “I find that Zenith is able to get our video anywhere in the country at a reasonable cost due to savings on trucking.”

Zenith, who currently has 100m2 of the EC-20 panels in its inventory, did several comparison tests with various products prior to opting for the EC-20. Zenith President Chas Herington explains, “Our purchasing decision was based upon the design and engineering quality, which is the best we've seen. The ease of use in both build and operation is impressive and the image quality, color uniformity and brightness are excellent. And driving the panels via the P3-100 platform is superb. A strong Martin brand and the company’s worldwide network were also determining factors.”

Zenith also supplies MAC 101™ and MAC 301 Wash™ LED moving heads for Tiësto, as well as the LC Plus LED panels. The MAC 101s and MAC 301s are curved around the DJ booth with Martin Atomic 3000 strobes and MAC 700s also getting in on the act depending on the show.