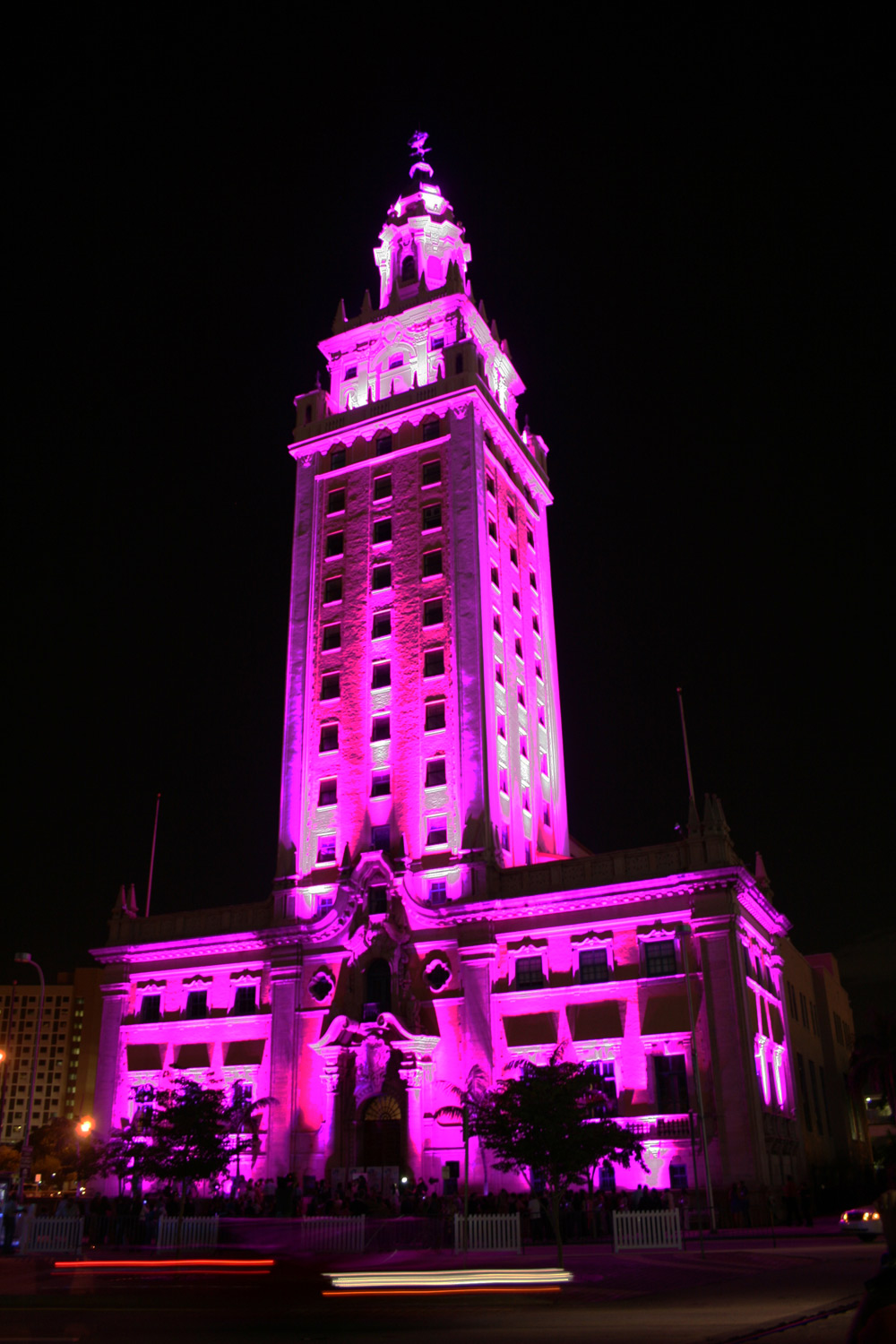 Freedom Tower, a historic 1925 landmark building in downtown Miami that serves as a memorial to Cuban immigration to the United States, recently received a dynamic nighttime transformation. The architecturally noteworthy tower, tucked amongst high rises and a major sporting venue, emerges from its surroundings in a can’t-miss dress of customizable color and light provided by Martin Professional Exterior 400 luminaires.

The Exterior 400 Range – a powerful yet energy-efficient line of LED light fixtures for colored or white light projection - gives Miami Dade College the flexibility to bathe the building in any color they choose. In recognition of Breast Cancer Awareness Month in October, for example, the building was bathed in pink - the official color of breast cancer awareness - for the duration of the month.

Dynamic highlight
Listed on the U.S. National Register of Historic Places, Freedom Tower was used to process hundreds of thousands of Cuban refugees in the 1960s. In 2005, the building was donated to Miami Dade College, which uses it as a cultural and educational center. The building has recently undergone a major renovation.

As the most prominent structure on its downtown campus, Miami Dade College sought to highlight the building’s landmark status and role as a major meeting point for both community and students.

In 2008, Jorge Gamez of Stage, Equipment and Lighting of Miami began working with lighting director Carlos Cedano of Miami Dade College on the renovation of the College’s downtown campus auditorium. In 2010, Miami Dade College was looking to illuminate the Freedom Tower and subsequently turned to Gamez. “They came to me with several prerequisites,” Gamez explains. “Most notably, they wanted to go green and insisted on LED. The Exterior 400 Range was just about to be released and fit in perfectly. I contacted Jim Fuller at Martin who provided a couple of prototype units for an evening of on-site demonstrations. The fixture really sold itself.”

“We went with the 400 Range because of the low power consumption and efficiency,” states Gamez. “It’s also really bright and does exactly what Miami Dade College wanted. The Exterior 400 is also simple to maintain and was easy to marry with the CueServer. Knowing that Martin’s US headquarters is locally based, we were confident that support was a phone call away. Martin is known for the quality of its gear and offer terrific support after the sale.”

Gamez and Miami Dade College sought to discreetly place the fixtures around the building, which the 400 Range’s small size allowed them to do effectively. Placed at the center shaft of the building are Exterior 400s with their narrow angle and longer throw beam, with the Exterior 410s located at various positions – ground, balconies, and roof. Installation was completed by E&C Electrical.

Painting the town pink or…
The nighttime illumination scheme, which is triggered by an astronomical clock, was first revealed on October 1st in recognition of Breast Cancer Awareness Month in a ceremony that included a candlelight procession to the building.

The Exterior 400 Range gives Miami Dade College the flexibility to bathe the building in any color they choose, for example, the colors of the Miami Heat NBA basketball team (red and yellow), who play just across the street at American Airlines Arena.