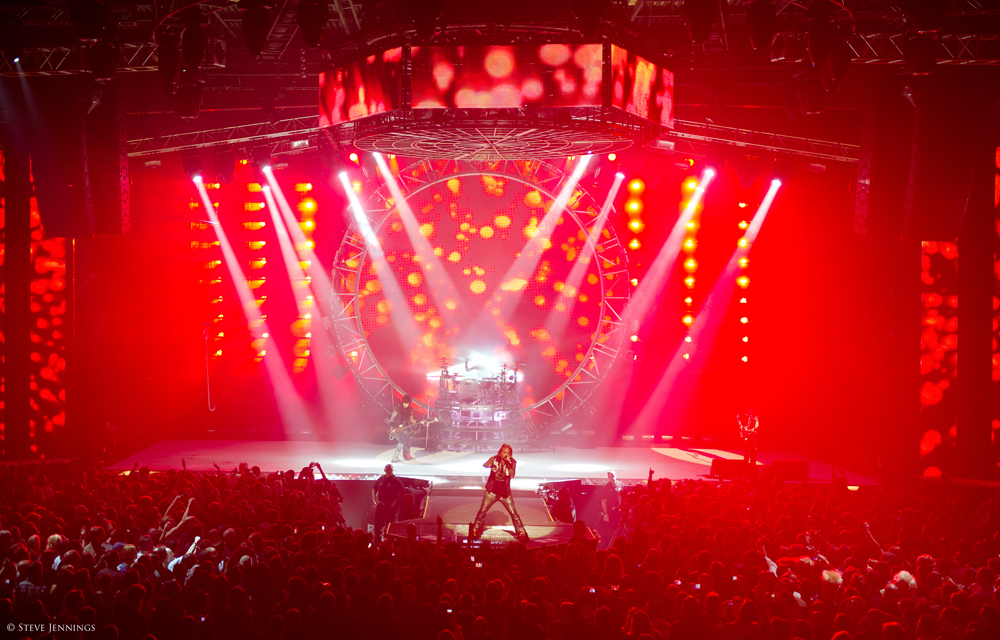 Martin Gets Mötley at Hard Rock in Vegas

“Martin products work exceptionally well in the world of rock and roll.”

Sooner Routhier and Robert Long have been co-production designers for Mötley Crue since 2010 and earlier this year had a run of 12 shows at The Joint at the Hard Rock Casino in Las Vegas.

The Auras were used throughout the show to provide saturated color on the set’s white carpet and were also used to glow the columns of drapes. “I love those things,” Sooner commented. “I'm extremely impressed with the color mixing of the Aura. The colors are brilliant from a crisp white to super saturated blues and reds.”
Sooner explains that early on in the design process it was decided to create a wall of LED behind the video wall - something that could create a super low res video effect through bitmapping in the console.

“We needed something compact and quick to use in a variety of effects,” she says. “The 101s are the perfect fixture. They're able to whip around to point through the video wall and then very quickly back to a backdrop focus for the next cue seamlessly. They've been one of the biggest work horses of the lighting rig.”

Mötley Crue has a reputation for fun and the Hard Rock shows were no exception having been described as a ‘musical and visual experience to haunt their audience.’ The show was packed with performance art, production gags and special effects from aerialists to pyrotechnics to big-time strobe effects, always a key element of Crue shows.

Sooner calls the Atomics “an obvious choice” as Mötley Crue is a strobe-heavy band that likes "in your face" punches. Fitted with Atomic Colors scrollers, the Atomics lined the floor in front of the video wall to blast through the band.

“Martin products work exceptionally well in the world of rock and roll,” states Sooner. “They're fast, bright, and have excellent beam capabilities. There is a huge amount of video in this show and we needed lights to be able to overcome its brightness. The MAC III Profiles and XB Washes were simply the best choice for us.”