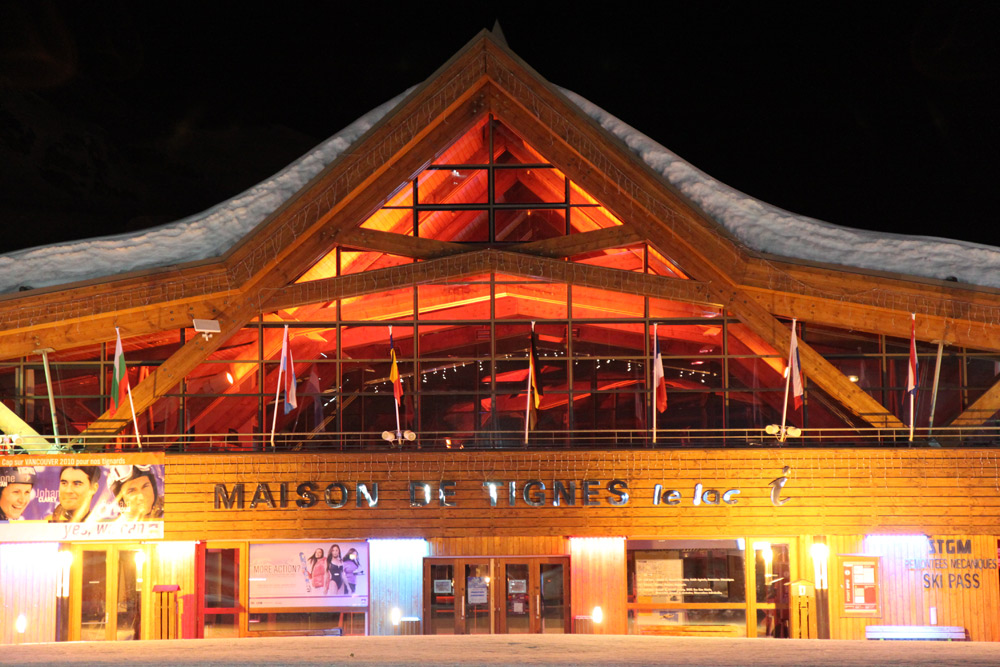 Following La Norma ski resort in the French Alps, the ski resort of Tignes has also entrusted Martin Professional with its lighting needs. Located at an altitude of over 2000 m, Vignes, together with nearby Val d’Isère, is internationally renowned for its magnificent slopes.

The first project, the Maison de Tignes, is a large reception center located just below the ski slopes. It enables guests to orient themselves, obtain information and have fun, all while getting warm.

The architecture of the building, which is made completely out of wood, is simple and chalet-like and, due to its dimensions, has an imposing framework which can be seen from outside. It is upon this first element that Jean-Philippe Corrigou based the lighting. Four Martin Exterior 600™ color changers show off the framework as well as the internal roof structure.

In order to avoid the sensation of the building “floating” above its location by only lighting the roof, the second part of the Maison de Tignes lighting highlights its long, low façade. Thanks to fourteen 1200 mm Extube™ IP65-rated LED luminaires, the external wall directly facing the slopes is dynamically illuminated at nightfall. The light marks the vertical limits of the building by highlighting the snow that surrounds it and the small cap that crowns it.

An event of international stature
The second project concerns the lighting of a square which will be the focus of the entire Alps skiing community for one weekend. From 10-12 March, Tignes will move to the beat of the X Games - the first in Europe! Following the same structure as the American X Games, the finals will take place at night before a backdrop of snow.

For the event, the Place du Curling on the Tignes Val-Claret side will be brought to life by the joint effects of an Exterior 1200 Wash™ and an Exterior 1200 Image Projector™. The Wash will provide a background of color on which the Image Projector will create animation effects, project the X Games logo, accentuate certain colors, etc. The two projectors will be fitted at a height of 20 meters on the roofs of surrounding buildings and will make it possible to project directly onto the ground, thereby enveloping passers-by in color.