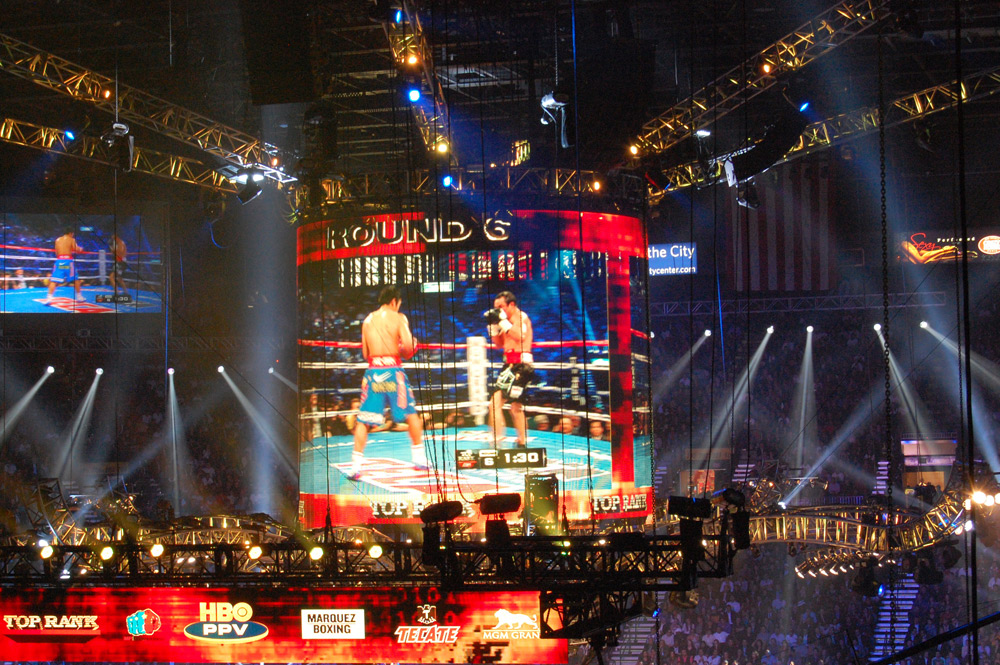 Although Manny Pacquiao’s majority decision over Juan Manuel Marquez at the MGM Grand in Las Vegas on November 12th was controversial, there was one clear winner that evening – Martin Professional’s range of LED video displays.

Ramp it up
Because boxing has traditionally been lit more for the television audience, the crowd inside the arena is often left to endure long, uneventful pauses. Todd DuBoef, president of Top Rank boxing, producers of the event, sought to change that by producing something visually impressive for those in the arena, as well as the on-camera audience, and worked with Jason Robinson to make it happen.

“He wanted to ramp it up, ramp up the production value with better imagery and higher resolution to entertain the fans, and that’s what we did,” says Robinson who worked with lighting director Michael Nevitt to realize his design.

In the past, boxing match designs were simple, typically a box truss hung above the ring. For Pacquiao vs Marquez III, as well as the series of undercard matches, Robinson’s design heightened the in-arena experience to help keep the audience entertained between rounds and between matches.

Video tube
Working with a lighting and video package supplied by Upstaging, Robinson designed a 22-foot round x 26-foot tall circular video tube of Martin EC-10 and EC-20 LED video panels that hung above the ring. The 360° tube, made up of 450 panels altogether, provided a close-up of the live action in the ring along with logo, graphic and pre-production video content.

The top two and bottom two rows of the cylinder were made up of 20 mm EC-20 panels with the five middle rows consisting of 10 mm EC-10 panels. The lower resolution top and bottom strips were used for logo projection, for example country flags during national anthems, while the higher resolution panels in the middle projected live action and high def program feeds. Four Martin P3-100 System Controllers were used to merge it all together.

During pauses in the action, the LED tube displayed video packages and other content to entertain the crowd. As this was the third Pacquiao vs Marquez fight, and there is an important storyline to tell, one of the videos recapped their history, adding further value for the live audience.

“It was really a type of interactive Jumbotron, a creative centerpiece that we could use for video and live feed,” Robinson says, who described the event as a choreographed and cued night of boxing.

Easy EC
Although not the first time Robinson has turned to this design – it was used on two previous fights in 2010 – it is the first time he has used the new EC-10 panels. “The EC was perfect,” he states, “and the depth of the panels is slim which gave a nice, seamless cylinder with no spaces and a high resolution image.”

Robinson has further praise for the EC-10 panels, singling out the quick set-up time, cleanness, and quality. He also found the ability to mix the 10 mm and 20 mm panels together simple, as well as scaling using the P3, color correcting for video, and making a true full circle LED tube. "No other video product on the market can do what we have done with this," he says.

LC tunnel
In order to heighten the pre-fight excitement, Martin LC Series™ video panels were used to form a tunnel of light along the length of the entrance way used by boxers to enter the ring. With the 17,000+ capacity arena sold out and a narrow entrance way to deal with, space was limited. Robinson lined both sides of the tunnel, and background, with LC panels with a roof of LC panels hung from a truss under motor control. As the main event fighters entered the tunnel - Pacquiao with Survivor lead singer Jimi Jamison to “Eye of the Tiger” and Marquez with a band of his own – the LC tunnel roof was raised to reveal the spectacle.

MAC rig
Also unique for a boxing match lighting design was an assembly of elongated trusses extending from the LED tube, a spider leg truss that housed MAC luminaires for energetic looks of color and pattern. Placed on the ‘crown’ of the video tube, the upper part of the cyclinder, and used to hit the audience to create an extra layer of light were MAC 2000 Wash XBs.

Also in the main lighting system was Martin’s popular and super-compact MAC 101.

“We needed to ramp it up to make the lighting bigger so we placed a lot of 101s in the truss,” explains Robinson, who used them for ballyhoos and camera beauty shots. “We turned them all to the camera to show off the rig, to make it look huge with points of light everywhere.”

For the first time, Robinson was also asked to light the live weigh-in and decided on the new MAC Aura. “With the Aura’s eye-candy effects, we were very pleased to be able to show something new,” he stated.

Tyler Roach of Upstaging was media server programmer for the event, working from a Martin Maxxyz Plus™ lighting console with Maxxyz Wing™. Lighting Programmer was Joel Young with video direction by Scott Keenan of PS America.