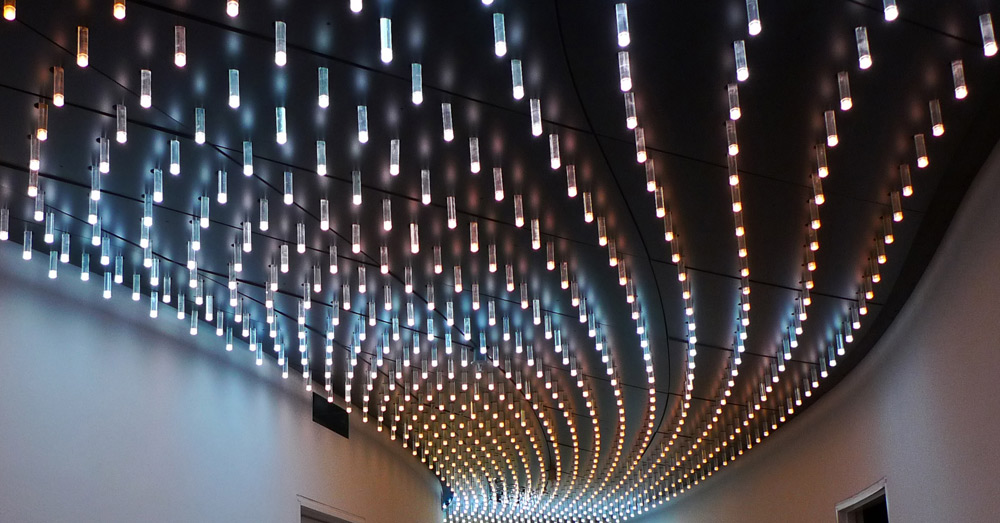 A unique reactive ceiling of color and light adds a compelling visual element to the refined interior at Saxo Bank headquarters in Hellerup, Denmark, as waves of light from Martin Professional LED sources embrace visitors and employees in an interactive light experience. The installation, a novel example of ‘enhanced brand ambience,’ highlights the dynamic interplay in everyday activities while shedding light on Saxo Bank as a modern and innovative company.

The Saxo reactive ceiling is made up of 2,400 Martin Professional VC-Dot™ LED light sources installed in a hallway that connects the Bank’s foyer with meeting rooms. Completed in November of 2010, the lighting installation is the brainchild of architectural firm Kollision (www.kollision.dk) with installation by lighting and show control firm Taintec (www.taintec.dk). Martin Professional initiated cooperation with Kollision and Taintec to provide the lighting hardware while handling the commercial and communication aspects with the client. The lighting installation was completed in dialogue with architect Christian Lund, who handles all new meeting facility design for Saxo Bank.

The project’s stated aim was to create a colorful and spectacular 'light source' integrated into the architecture. Kollision subsequently employed multiple lines of RGB LEDs along the curved walls of the passageway using VC-Dot in the ceiling as the primary light source. The only other light source is lines of RGB light running along the bottom of the walls.

Installation
The VC-Dot LED light sources - lightweight yet bright (RGB) LEDs that are individually controllable via DMX512 - are distributed along 18 lines of 133 light sources each. Emphasizing the architectural form, the light sources run the length of the curved passageway. On closer inspection, the individual radiance of the light sources is propagated by acrylic tubes that protrude through precisely cut openings in the ceiling. The light is distributed throughout the opaque end caps of the acrylic tubes, which emerge as intense points of brightness and color hovering just below the ceiling surface.

“The VC-Dots are really powerful in terms of flexibility, and we specifically needed a flexible light source that we could control by DMX/Artnet,” states Rune Nielsen, architect and partner in Kollision, the primary lighting designer on the installation who also designed the ceiling itself with a specific focus on the physical layout of the LEDs.

Tue Selmer Friborg of main installer Taintec expounds on the installation. “Developing the right way to mount the LEDs was a major part of the project. Our first idea was to mount the LEDs on the backside of the ceiling, before it was mounted. For maintenance reasons however, the ceiling would then have had to be detachable. We dropped the idea as either the size and weight of the sections would be too big or the number of joints would be too many.”

The end result is a solution that features two ceilings; a fixed ceiling that holds the equipment and a detachable portion that covers the equipment, only revealing the acrylic rods. The detachable ceiling is divided according to the lines formed by the LEDs and held in place by magnets (and safety wires).

“We developed our own bracket to hold the rods and VC-Dots, as well as brackets for magnets and safety wires,” Tue explains. “The brackets and the acrylic rods were then CNC machined on the basis of our drawings. The very organic and complex layout of the LED points, the short time we were assigned for installation, and the fact that the two ceilings had to match 100% called for a CNC milled ceiling.” From the CAD drawings provided by Kollision, Taintec produced a drawing with all the VC-Dots plotted in then added sprinklers and fire detectors into the design.

Lighting design
From this organic layout various lighting designs are brought to life, expressions like 'Aurora Borealis,' ‘Snakes’ of light or ‘Wash’ fades. Also, visitors encounter reactive aspects of the design as meeting room doors open and close, sending pulses of light that grow and spread on the surface of the ceiling. Finally, an informative and independent layer of light signals if a meeting room is occupied by illuminating two distinct red dots above the door.

“We see a dynamic light solution as a powerful way to emphasize a positive interplay between the actual space and the users,” states Rune Nielsen. “We refer to this as Enhanced Brand Ambience. The idea is to create an experience-oriented and - in many ways - more colorful architecture that supports a dynamic interplay with everyday activities, which in the end sheds light on Saxo Bank as a modern and innovative company.”

Control system
Kollision also developed the custom graphics engine that runs the setup via a dedicated computer. The software generates real-time graphics in multiple combined and blended layers and outputs it as Artnet. It also maps the content to the physical layout. The mapping can, for example, distort the graphics in relation to the curvature of the layout, or it can 'place' the visuals directly onto the image plane of the ceiling. In this way it is possible to merge movies and pictures and blend them with running text bits and real-time generated graphics together with effects triggered by doors opening or closing.

Taintec has provided and programmed a similar computer for a different task. It runs show control Medialon Manager Lite software, which handles input from door sensors, PIR sensors and push buttons. Relevant information is passed on to the content PC as TCP packets. The Medialon Manager also features a control panel, which the staff at Saxo Bank can use for maintenance. The Medialon Manager determines which cue or "look" the content PC should display and controls the lighting over a coffee table, dependent upon the activity in the room, while various RGB settings color the walls, depending on the ceiling expression being displayed. If for some reason communication between the two systems should fail, the content PC will go into autonomous mode and the Medialon Manager will send Taintec an email informing about the issue. Likewise, the Medialon Manager will check all auxiliary components on a regular basis and generate error messages sent by email if anything is malfunctioning.

iOS control
As Saxo Bank also wanted to control the ceiling from an Apple iPad or iPhone, Kollision also developed an iOS control app to activate and control the various lighting designs. Rune explains, “The app takes advantage of the iPhone’s full functionality and interactive features and the iPhone’s touchscreen turns the ceiling into a canvas. Simply running your fingers across the screen paints a flow of colors across the ceiling. Another mode lets you control the position of a large light spot by tilting the iPhone in the direction you want the spot to move. The app provides the user with a feeling of control and the ceiling itself becomes a tangible object creating a more corporeal relationship between the two.”

Also used are three Martin Ether2DMX8™ DMX routers to convert the Artnet data to 20 DMX universes. “It is my first time working with these units but my first impression has been really positive,” states Tue Selmer Friborg. “They are versatile and in contrast to competing products, feature a fantastic user-interface both on the unit itself and through a web browser.”

Recipe for success
Tue Selmer sums up the importance of positive teamwork on the project. “I think the reasons for the success of this project have been the way we have worked together. First of all the client and the architect have been generous enough to give us a very free hand to develop the right solution. Also, the outcome is not a work of any one person or one company. Martin’s Leif Orkelbog-Andresen invited us to a brain storm in which we played with different ideas and inspired each other to come up with an idea that would eventually lead to the final idea. I think Leif deserves kudos for letting us work on the basis of the project and not on the basis of the Martin product portfolio. Finally, in the planning, programming and installation process, we all had our specific responsibilities, but we maintained a close dialogue and kept on inspiring, challenging and helping each other.”

Commendable
Rune Nielsen expresses his satisfaction with the project’s outcome, concluding, “Even though we have worked intensively on the installation for more than half a year the outcome of flexible and good-quality lighting products combined with the diversity of lighting designs keep giving new and surprising experiences and give the very space an interesting, ethereal and dream-like quality. Observing the installation and its users has been really interesting with employees and visitors alike taking the time to comment on the ceiling.”