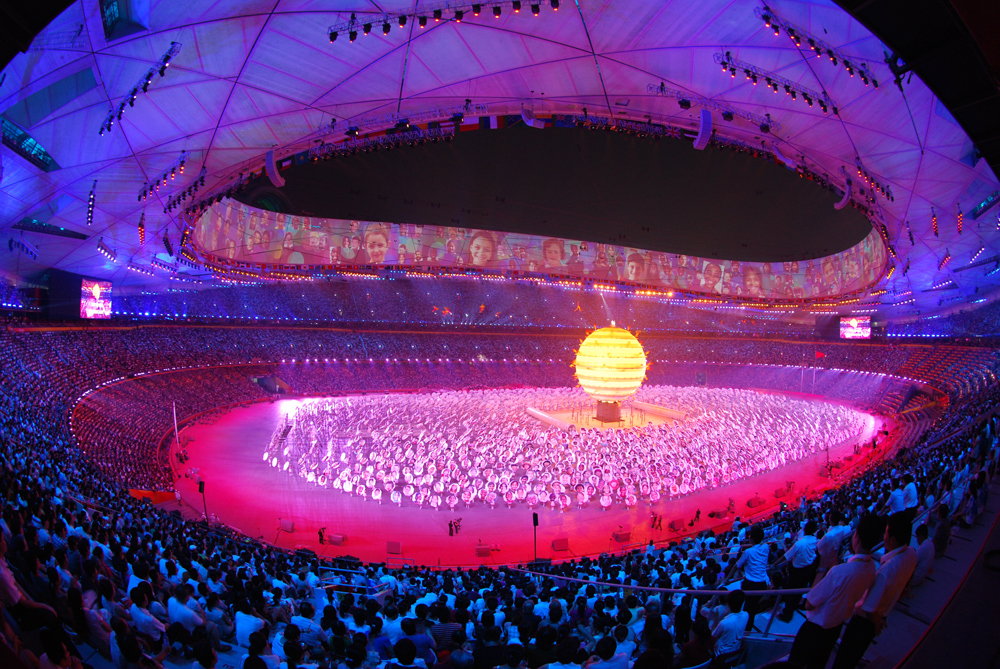 In what has been universally praised as the most visually spectacular Olympic Opening Ceremony of all time, and arguably one of the most remarkable events ever produced, China celebrated its emergence onto the world stage in grand fashion by hosting the Opening Ceremonies of the 2008 Summer Olympic Games at Beijing National Stadium, also known as the Bird’s Nest.

A multimedia, three-dimensional display created by director Zhang Yimou, some 22,000 people took part in the gala, in which 15,000 costumes were used. Martin is the largest automated lighting manufacturer represented at the Beijing Olympic Ceremonies with more Martin MAC 2000 Wash luminaires in use than any other single fixture in the lighting system.

Lighting personnel began initial installation of the fixtures already in March with most of the MAC luminaires rigged in the roof of the stadium and several hundred lining an upper balcony. Main lighting supply for the Ceremonies is by China Central Television (CCTV) with several lighting sub-suppliers also contributing. All Martin gear was acquired through Martin’s Chinese representative, Martin Hong Kong, who worked tirelessly to provide countless hours of pre-event support. The Martin fixtures will remain in place for the Games’ Closing Ceremony on August 24th and subsequent Paralympic Games to be held from September 6-17.

Lighting Designer Sha Xiao Lan
Long before the Opening Ceremony took place, people started to speculate who the lighting designer in charge of the Opening and Closing Ceremonies would be. Now we know him as Chinese LD Sha Xiao Lan who no doubt deserves the honor. As the world watched the Opening and was awed by the brilliance of the show, we were eager to know Sha Xiao Lan’s thoughts on lighting the world’s most watched event.

Sha Xiao Lan: “After knowing I would be the chief LD of the Opening and Closing Ceremonies of the Beijing Olympic Games, I spent a lot of time conceiving the lighting design. The Olympics is not only for the Chinese people but for people all over the world, so we had to satisfy not only the Chinese but people from all countries. The problem is that people from different places have different tastes in aesthetics. To be specific, Westerners prefer elegant pastel colors, Chinese are fond of strong highly-saturated color, and this was the major part to be considered.

“We did research on the Athens and Sydney Olympic Games and in order to emphasize the technological factor of the Beijing Olympics we decided to utilize the most advanced technologies and products to actualize the Opening and Closing Ceremony design.

“You know that the Beijing Olympics gained nationwide support from the very beginning. However, the budget for the lighting design was less than that of the Doha Asian Games. Yet many well-known manufacturers and suppliers promised they would do whatever they could to provide whatever we needed and I was deeply touched by their gratitude.

“After we knew about the Bird’s Nest’s 14-meter high by 500-meter long brim, which is perfect for positioning fixtures, we adjusted our plan accordingly.

“The Beijing Olympics is being transmitted in a high-resolution digital signal, so we needed the lighting fixtures to be highly uniform in color temperature. According to our plan, we needed approximately 2,700 moving lights, which is unprecedented. Martin, Vari*Lite and many other well-known brands attended the bid and we had to choose the most suitable ones. Even as the head LD, I didn’t have the authority to decide which brand would be used in the Ceremony, though my opinion was important.

“The Martin MAC 2000 Wash was eventually chosen because it’s the most stable fixture with the most uniform color wash I’ve ever known. We used about 1,200 MAC 2000 Washes in the Opening Ceremony, which is also unprecedented. No event has ever used so many units under the same brand before as far as I know. About 90% of the Washes were used to wash the performance area, the ceiling of the stadium and the audience. We also used 110 Washes to add backlighting for the audience.

“Martin fixtures have the highest value for money and are quite stable with a low dysfunction rate. The nominal dysfunction rate is 2% according to the information from the manufacturer, but the actual dysfunction rate is lower than that. Plus the uniformity of color is perfect, which can not be reached using other fixtures. Besides the foresaid merits, I am very impressed by the MAC 2000 Wash’s speed and accuracy in movement and positioning. In the Opening Ceremony we used wash light to position, that’s rare, and the Martin fixtures’ performance is excellent; this is widely acknowledged by my colleagues.

“These fixtures were indispensable in achieving the goal of satisfying everyone. Without these fixtures none of our ideas would have been possible.

“Even when using the white color, we needed it to be tasteful. If you watched carefully enough you noticed that the white color in the Chinese Landscape Painting scene was different from the white color in the Movable Typography scene. In the Road of Silk scene we used the amber color to simulate the atmosphere of deserts and in the Rites and Music scene we used the royal golden hue to create an atmosphere of the Imperial Palace. During the Tai Chi and Zheng He Fleet scene we used highly saturated deep blue. I dare say without the Martin MAC 2000 Wash, none of the above would have been possible. The wash effect of the MAC 2000 was so perfectly uniform; light from the 1,200 units was just like light from one single unit. And the saturation of the MAC 2000 was fantastic as well. Remember when Lang Lang and the little girl began to play piano together? The colorful light was just like an impressionistic painting.

“I believe through the Opening Ceremony we successfully showcased the lighting design ability of China. All factors including organization, back-stage, control, and lighting design are quite satisfying and we have gained the praise from the Western media.”

The Most Watched Television Event in History
With over 90,000 spectators in attendance for the Opening Ceremony and most of the world glued to their TV screens, the event was perhaps the most watched television event in history. The man responsible for ensuring that the broadcast lighting aspect for the Opening and Closing is optimal is Australian Paul Collison, a veteran lighting specialist who brings experience from several large sporting events such as the Commonwealth Games, Gulf Cup, Asian Games and Rugby World Cup.

Paul comments, “Lighting for television on an event like this can be quite a challenge. The performance area is huge and when you add the audience in as a background you have almost a full square kilometer of surface area to light. Even though the show, at times, is orientated to one side, the cameras can be pointing in any direction. We are very aware that every area of the stadium is a part of the show.

“The MAC 2000 XB’s have been great. They are bright. Really bright. They sit in perfectly well with the other 900+ standard MAC 2000 Washes. We have used them out wide on the level 3 balcony position to get some extra kick in from the sides when the performances are orientated towards the VIP/on camera side. They also have a slightly longer throw to the center of the field from that position.

“All of the Martin fixtures have performed well under trying conditions. High humidity and high temperatures are hard on lighting fixtures. Not to mention the huge amount of dust that we encountered through the final stages of the construction of the Bird’s Nest. I’m sure these fixtures have seen more dust over the last four months than most vacuum cleaners see in a lifetime! Despite this the fixtures are still working well. We have a much lower fault rate with the Martin fixtures than any others in the system. Martin’s commitment and support has been exceptional and certainly helped to make this project run smoothly.

“Personally, this has been an amazing experience. Even though culturally China is very different from many other countries I have worked in, the level of knowledge and willingness to learn has been quite refreshing. Everyone I have come in contact with on this project has been friendly, caring and above all most professional. I’d come back to China in a heart beat to work on another project…if only for the fantastic food!”

Christian Engsted, Martin Professional CEO, had this to say, “We are honored to again play an integral role in the staging of the world’s most prestigious sporting event. The MAC 2000 Wash’s extremely high output and long throw capability coupled with its proven reliability make it ideal for such a large scale event. Martin’s position as an industry leader with an extensive global reach allows us to deliver in these record breaking quantities while our support network provides 100% on-site backing throughout the course of the event.”

Martin Lighting at Other Sites
Martin lighting is also employed in several other areas including 800 Martin fixtures used for an Opening Ceremony at an alternate site in Tsingtao (Qingdao), home to sailing events. Several on-location TV studios are also using Martin gear including US television network NBC on the “Today” show and Mexican TV network Televisa.