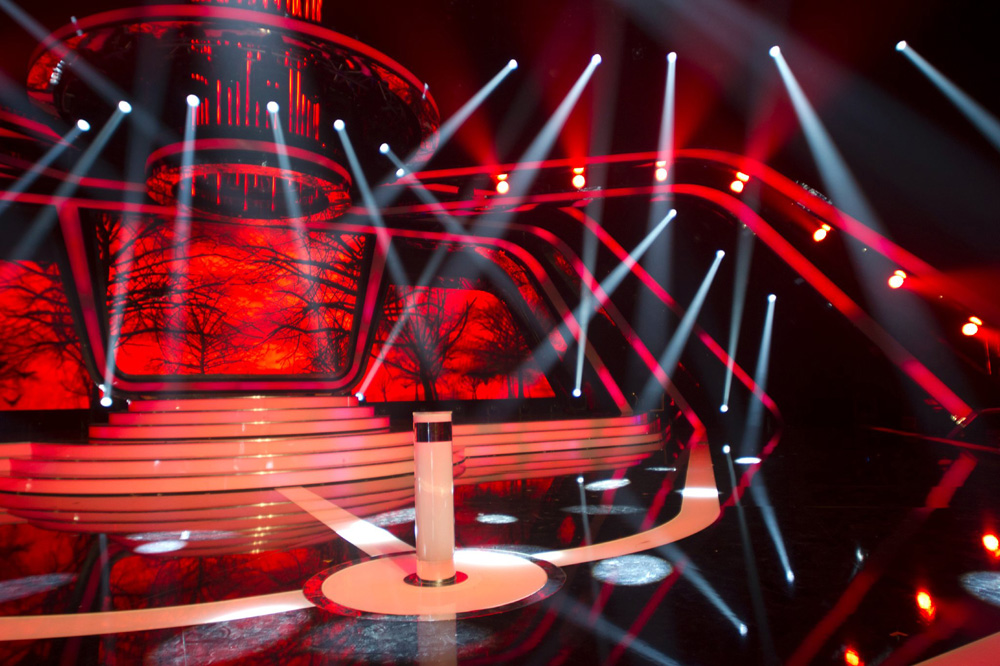 Running for six weeks in the UK from the end of June until the beginning of August, ITV1’s "Your Face Sounds Familiar" saw celebrities take on a new identity each week, vying for the chance to win £10,000 for their chosen charity. Aurora Lighting Hire provided full lighting facilities for the show, including a substantial selection of Martin Professional luminaires.

Coming from the prolific Endemol stable, the Saturday evening program saw celebrities including Natalie Anderson, Alexander Armstrong and Denise Lewis transform themselves into different singers - chosen via the show’s ‘Randomiser’ - to perform a well-known song each week.

Lighting Designer Gurdip Mahal was tasked with helping to create a lighting design that would look fresh and exciting for every program. He chose to include a combination of Martin MAC Viper Profile high-output profile luminaires and MAC Aura LED wash lights as part of his rig.

“I worked with the set designer from the beginning. The set needed to look as good at the end of the six weeks as it did on song one and each song was themed, so we had to reflect that,” says Gurdip. “In addition, as well as wowing the television viewers and studio audience, the lighting gave the artist on stage another layer to work with, so it needed to make things exciting for them too.”

With the song selection for each celebrity being random, once the lighting team knew the choices for the following week they started work on new lighting concepts.

“We had a meeting at the end of each Saturday night to brainstorm ideas,” says Gurdip. “Because we only had a week in which to do it, the set was designed to be as versatile as possible.

“I used a lot of Auras because I like the colors, the speed and because their light weight allowed us to hang them from the set’s arches, which have a low weight loading. We used them to light the audience, making them feel as if they’re part of the stage. We chose Viper Profiles because we love the range of gobos we can use with them, their brightness and speed. A key use for them was as backlights for the judges, providing them with a bit of visual separation from the audience.”

Your Face Sounds Familiar is one of many high profile television shows Aurora works on, others including The Voice, Alan Carr Chatty Man, The Graham Norton Show and The Jonathan Ross Show.

“Gurdip and other LDs we work with really like the Martin Viper and Aura, so we made an initial purchase of 20-30 units,” says Aurora Managing Director Nick Edwards. “Everyone really likes them, so throughout the course of this year we’ve invested in more and more. This year has been great for us; we’ve been contracted for an increasing number of shows, so we’ve kept reinvesting in equipment.”

Aurora has been using Martin Professional fixtures for the best part of 20 years and it’s a relationship that both companies cherish. “Having great lights like the Viper and Aura makes a big difference,” says Nick. “We know Martin fixtures will work well for what we need to do and that they’re extremely reliable. For us, that’s essential.”