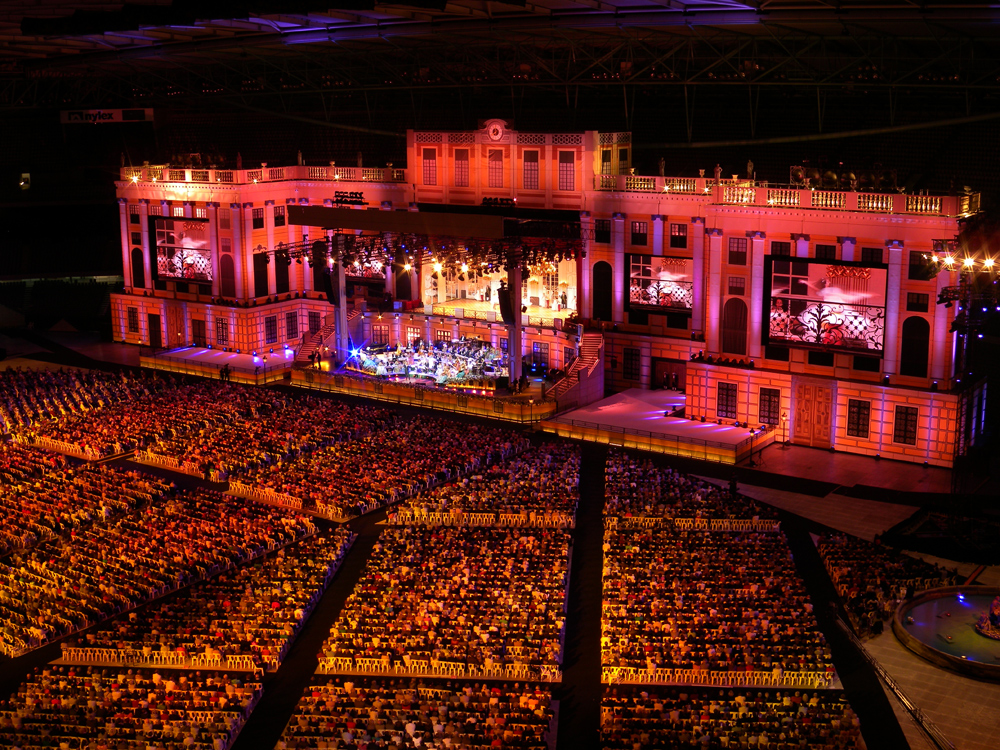 The 34 meter high stage - a reconstruction of the Schonbrunn castle in Vienna - includes a ballroom with gilded chandeliers, majestic fountains, and even ice for skating. Lighting the massive set is an equally impressive Martin lighting rig made up of 30 MAC III Profiles™, 185 MAC 2000 Washes™, 58 MAC 2000 Wash XBs™, 114 MAC 250 Washes™, 10 MAC 2000 Performances™ and 14 Exterior 200s™. Lighting contractor is Rent-All BV, one of the largest rental companies in Holland, who have been supplying lighting for André Rieu shows for years.

Big throws require big beams
Lighting design for the tour is in the capable hands of Maurice Verbeek who has been designing lighting for André Rieu for nearly 12 years. Verbeek turned to Martin’s popular 1500 watt MAC III Profile to span the set’s enormous trim heights. “When I started to draw the plots for the World Stadium Tour I realized the size of this stage was enormous!” Verbeek says. “The trim of the main rig needed to be 15 meters and we needed a lot of strong lights.

“At that time, the MAC 2000 Profile/Performance was the strongest spot but I needed something stronger with a bigger zoom range. After finishing the European tour, Rent-All informed me about the new MAC III Profile. After seeing a demo we decided to exchange the VL 3000 with the MAC III.”

Verbeek first used the MAC IIIs on the Australian leg of the tour, programming them to match the gobos and effects of earlier shows. “The MAC III performed very well with few problems. Finally, there is a profile spot that's strong enough to compete with the power of a MAC 2000 Wash.”

Keeping promises
Co-designer and programmer on the tour is Gertjan Houben of Moving Lights Support of Amsterdam. He adds his thoughts about the MAC III units: “When we started designing for André Rieu's World Stadium Tour we knew we needed something bright, powerful and versatile,” he said. “While looking at all the usual suspects in that segment, Rent-All BV invited us for a demonstration of the then soon to be released MAC III. Having heard some rumors about it being bright and powerful, we didn't hesitate to accept the invitation. The demo was very impressive and we knew we had found the light we were looking for.”

Luckily, says Houben, the release date of the fixture coincided with the shipping dates to Australia. “When the rig came online in the Telstra Dome in Melbourne and we started programming, the light kept all its promises. The brightness of the output exceeded our expectations and with the impressive zoom we could get the light where we needed it most.”

Besides the versatility of the fixture’s gobo/prism combination, Houben was most impressed with the new color mixing system. “It's fast and mixes beautifully,” he comments. “The extended range of color depth in the magenta and yellow are a huge improvement. Together with Bart van Stiphout the system engineer, I was also very pleased with the relatively small channel footprint of the light. When it comes to universes in these big shows, more is not better.”

Looking back on the shows, Houben says that they definitely made the right choice with the MAC III Profile. “I'm looking forward to the next production I can spec it on,” he concludes.