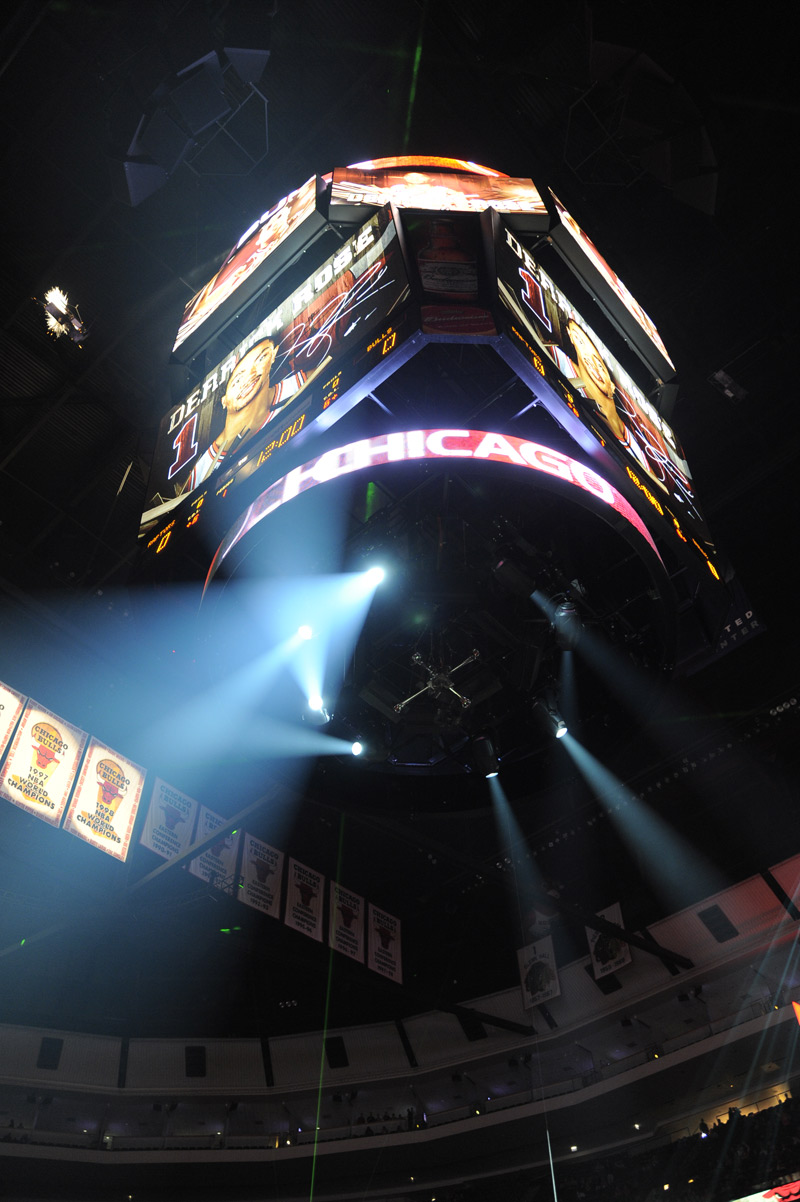 When the Chicago Blackhawks ice hockey team brings home the 2010 Stanley Cup, and the Chicago Bulls basketball team slam-dunks another win, of course the crowds go wild with excitement. But at other times - in pre-game festivities, player introductions, during an intermission or even in long stretches of play - the frenzy is fueled by the in-house lighting rig.

In a new light
In many arenas and stadiums around the world, a venue’s in-house rig is being viewed in a new light. Not only does new technology add to the total experience for the event-goer, but it also translates into more creative marketing for sponsors and event partners at the venue.

Projecting sponsor or team logos through automated lighting fixtures is all part of the standard event experience now. But not just any standard automated luminaire can fit the bill for the Bulls or the Blackhawks.

Last year, the United Center production team took a hard look at their aging lighting gear and decided it was time to upgrade. Brady Tieman, technical production manager at the United Center, describes the old previously installed 16-fixture rig: “Eight of the fixtures were a pan and tilt model that was prone to frequent failures; they spent too much time in the shop which resulted in countless hours of programming to come up with workarounds for defective fixtures. The other eight moving mirror fixtures were over 12 years old and had become too expensive to maintain. Unlike a touring act, we don’t have full time light techs on staff to quickly repair moving lights.” The tech team brought their challenge to production company Upstaging in Sycamore, Illinois, who recommended the MAC III Profiles.

Value added
One can easily ask what value a lighting system adds to an arena or stadium. The answer is found on many levels. The Return on investment (ROI) is a numbers game, and marketing directors can provide figures. But beyond that, the value added is a “value-added experience.”

“Generally speaking, as the fan pays more and more for their event ticket, anything you can do to increase their entertainment experience is a plus,” Tieman says. “A robust moving light system allows you the power and flexibility to create atmospheres ranging from the dramatic to the frenetic.

“Lighting in a sports venue is certainly not the main event, but as a component of the overall entertainment it does contribute positively to the fan experience,” he adds. “Nobody buys a ticket for the light show but I’d like to think they try to get here on time so they don’t miss it!”

MAC III Profile
The United Center bought and installed eight MAC III Profiles last year and because of their satisfaction, another eight units joined them this summer. The 16 fixtures are split up between the bottom of the center-hung scoreboard and the outer perimeter of the catwalks.

Upstaging’s Mike Creager explains the process behind their recommendation. “We always want the brightest light out there, and in recent years there’s been a new level of lights to look at. Brady needed it bright enough for throw distances that are 80-feet and more. So when considering fixtures, we looked at light output.”

The MAC III Profile features a 1500-watt short arc discharge lamp. Says Tieman, “In this venue it’s important for moving lights to be bright enough to overcome long throw distances and competing light sources from the scoreboard, fireworks, and so on. There are a few different choices in fixtures at this brightness level but several factors set the MAC III Profile apart from the others.”

Fixture reliability was a big consideration, Creager says. Upstaging had the maintenance contract on the new purchase, so “we had to be more critical regarding the United Center as it’s not easy to get to those lights in the venue to service them,” he says. “Our service department said they liked the MAC III Profile best as it’s easiest to service and easiest to support. So after a few shootouts with other fixtures in the same class, the MAC III Profile was found to be more thought-out with its design.”

The MAC III Profile’s modular construction adds to its easy serviceability, Tieman adds. “The modular construction was appealing because if we have malfunctions we can just extract that particular module and take it in for service, while maintaining other operational modes.”

The zoom range is also well-suited for arena operations, Tieman says. “The 55-degree zoom range allows us to illuminate very small or very large areas, and also enables us to project images of the same size whether the lights are hung from the scoreboard (about 50 feet from the floor), or from the catwalks (about 130 feet from the floor). The magnesium alloy covers and removable gobo holders make swapping gobos easy, an important plus in an industry with frequently changing slogans and logos that need to be displayed in our moving lights.”

Both Tieman and Creager agree on the higher quality of Martin Professional fixtures over recent years. “Martin has been manufacturing lights of an increasingly higher quality over the last few generations, which was an important consideration given all the mechanical failures we’ve experienced with some of our other lights,” Tieman notes.