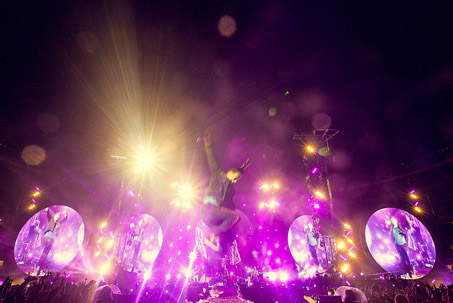 Martin Professional Comes In From The Coldplay

The stakes are always high when a band of Coldplay’s stature hits the road and creating something visually new and exciting is a constant challenge, but it is one that production designer Paul Normandale is more than equal to. With the band’s 2012 tour taking in both arenas and stadiums, Paul has once again chosen an array of Martin Professional fixtures, including the new 1000 W MAC Viper Profile™, to add to his lighting arsenal, which enables him to create a fresh, dynamic look and feel that is a real crowd pleaser.

Paul has been working with Coldplay for the past five years, first on the Viva La Vida tour and now on that promoting Mylo Xyloto. Lighting vendor for the European leg is Lite Alternative, while Upstaging handles the North American leg. On the arena tour, the Martin inventory included 46 MAC 101™, 32 MAC 700 Profile™ and 13 MAC 2000 XB Wash™. For the stadium dates this has been increased to 58 MAC 101™, 24 MAC 700 Profile™, 16 MAC 2000 XB Wash™, 20 MAC 250™ with micro lens and six of the company’s latest fixtures, the Viper.

“Martin originally asked me to incorporate the Vipers as field test units. But I saw them on demonstration at their Aarhus headquarters and knew that they would fit the bill of a bright but small profile source,” says Paul.

The new MAC Viper Profile produces 26,000 lumens of power, making it brighter than 1200 W fixtures on the market with a smaller form and lower weight. Its excellent light quality and very flat and uniform field, plus its fast zoom with auto-linked focus makes it ideal for Paul’s purpose.

“For me, the benefit of Martin is that they produce the right fixtures for the job,” he proclaims. “They are reliable and readily available worldwide, which is important when you’re taking a large production on a global tour.”

The convergence of lighting and screens is something that has become a familiar concept in recent years and is one that Paul has embraced on this tour. With five large circular screens providing plenty of eye candy, Paul’s lighting design seamlessly draws the two mediums together.

“I was keen to blur the boundaries of lighting and video on the stadium shows,” he says. “My ideal is totally colour affected IMAG, working in union with the lighting.

“This means that the lights I use need to be bright and their zoom needs to be significant. The Martin Professional fixtures help me to achieve that and I am always very happy with the way the equipment performs and their support.”

“We’ve supported Paul for many years and are great admirers of his work,” says Martin Professional Sales Director UK, Mike Walker. “We were delighted when he decided to incorporate the new Viper into the Coldplay lighting design. It’s always great to know that we’ve got things right and we feel that Paul’s faith in our products, and ours in him as someone who will give us valuable feedback, has once again been justified.”