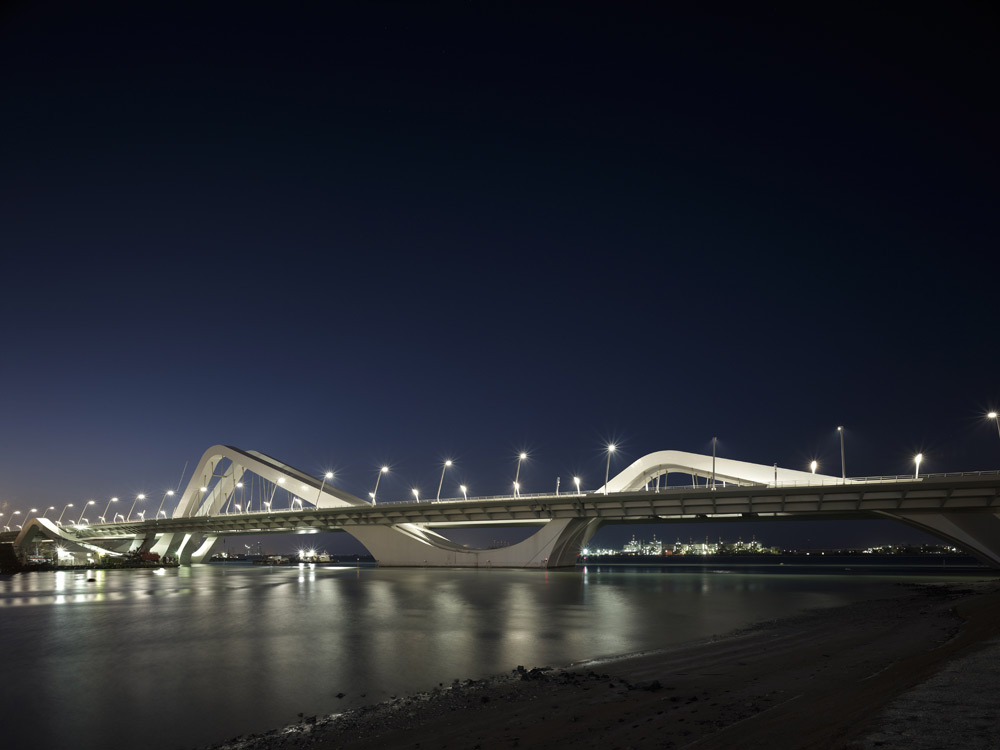 The Sheikh Zayed Bridge in Abu Dhabi has been illuminated in spectacular fashion using Martin Professional color changing luminaires. The bridge, which soars to a height of 60 meters and stretches 842 meters, connects mainland Dubai to the island of Abu Dhabi and acts as a gateway to the city.

Ideas for illuminating the Sheikh Zayed Bridge began over a decade ago when colored illumination was promoted by Nour Assafiri, CEO of Martin Middle East, to the Municipality of Abu Dhabi. They liked the idea and accordingly asked the bridge’s prestigious architect Zaha Hadid to consider the concept.

The highly artistic form of the bridge consists of a linear deck with waveform spine of three main arches. The spine arches are illuminated by Martin dynamic colored light that extends both above and below road level. Fitted in lighting cells underneath the deck of the bridge are customized Martin Cyclo fixtures for white light illumination.

A redundant lighting control system is centered around a Martin Maxxyz Compact™ lighting console, which was used for lighting programming, with a Martin M-PC used for control of daily lighting scenes.

The specially developed lighting scenarios can be used to celebrate religious traditions, festivities and public events. With the new moon each month, the bridge lighting mimics the inspiring Martin nighttime illumination of the landmark Grand Mosque, which sits nearby. Once a month, both iconic structures appear tinted in deep blue to create a sense of urban, and cultural, connectivity.

Incredibly complex
Rogier van der Heide, Chief Designer and Vice President at Philips Lighting, and previous Director at Hollands Licht and Arup Lighting, created the original lighting design concept for the bridge. He commented, “The lighting design of this project was incredibly complex. I had to integrate color changing technology, dust- and waterproof equipment, a very advanced control network and special optics into a single holistic solution to realize the creative design.”

Successful collaboration
Martin Professional Middle East was instrumental in executing the design and realizing the final effect, says van der Heide. The lighting design was further detailed with an international design team at Arup. The final project phases, including programming of 13 artistic scenarios, were led by Simone Collon, associate and lighting designer at Arup.

“Without the tremendous contribution of Martin Pro Middle East and High Point Rendel, this project could not have been done,” van der Heide stated. “The successful finalization of this project demonstrates how important it is to collaborate, and how architectural lighting has evolved into a holistic discipline that brings together designers, manufacturers and engineers in an integrated process.”

Martin Middle East (MME) involvement:
1997: Colored illumination promoted by Nour Assafiri (MME) to the Municipality of Abu Dhabi
2002: MME supported the design as the contractor was looking for alternative design products to cut costs. Worked in close collaboration with Arup.
2002: Completed a mock up of project
2002: MME works with Martin HQ to customize Cyclo 01 luminaire to fit project
2005: MME, with Arup, produce an animation to visualize Arup’s design which is submitted to the client and used to promote color changing illumination on the bridge
2008: MME finalize together with Arup representative Rogier Van Der Hiede the cabling network and re-design control solution to a Martin control system.
2009: MME finalizes the project with the contractor and begins supply 2010. Installation, testing, focusing, and commissioning executed by MME engineers
2011: MME programs the lighting system to client and designer’s satisfaction