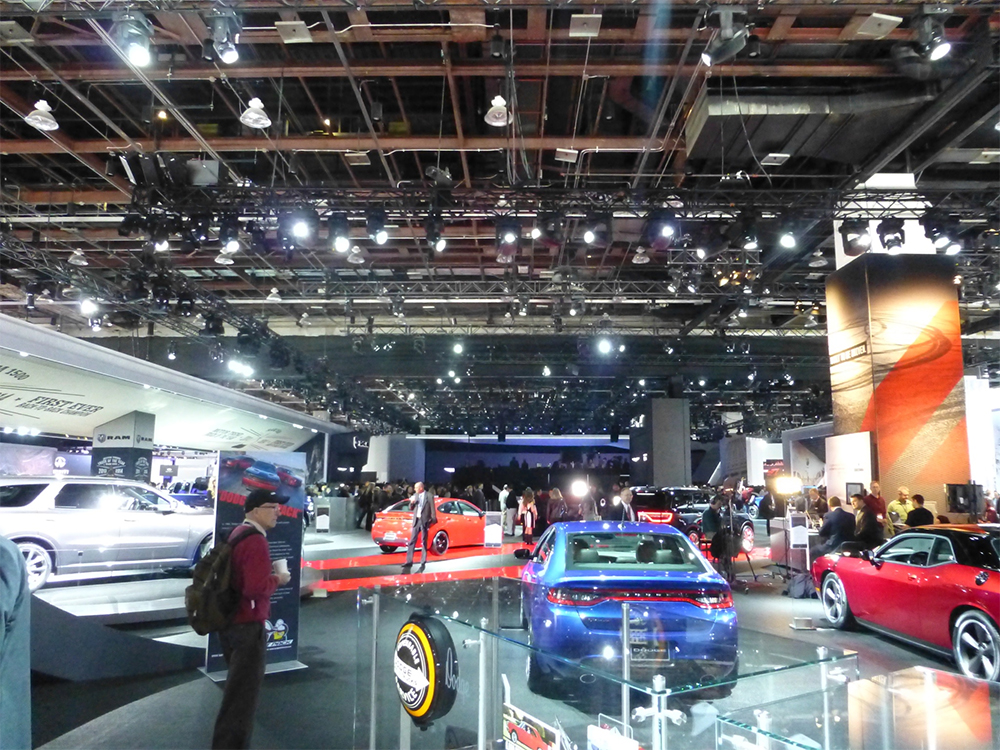 The North American International Auto Show (NAIAS), better known as the Detroit Auto Show, is one of the largest automotive shows in North America and annually features many national and worldwide introductions from the world’s most renowned auto manufacturers. Perennially held at Detroit’s Cobo Center, the 2014 NAIAS showcased the industry’s latest innovations to more than 800,000 attendees over the course of nine days. As a critical component of the show’s experience, over 1,400 of Martin Professional lighting fixtures were deployed by a number of leading production partners and lighting provider Christie Lites across the entire show, including booths for Chrysler, Nissan, Infiniti, Ford, Lincoln, Acura, Volvo, and more.

Chrysler
Chris Wojcieszyn of Lighthaus Design teamed with Bruce Spillman, Onsite Lighting Designer, who oversaw the execution and focus for Chrysler’s 2014 NAIAS booth, to develop an elaborate lighting design for the booth which also featured Fiat, Dodge, Jeep, Ram, and SRT. Wojcieszyn used 270 of Martin’s MAC 2000 XB Wash lights with super wide lenses to create an even white wash across the booth’s exterior, which consisted of large flat white walls on three sides. Spillman and Wojcieszyn also deployed 81 of Martin’s Viper Wash DX luminaires on all the featured vehicles on revolving platforms across the booth. Wojcieszyn commented:
“The new internal barn-door setting and shuttering system on the DX washes are really easy to work with. It allows you to manipulate and shape the light exactly how you need it without compromising the power and amount of light you are getting.”

Acura
Chris Wojcieszyn was also the Principal Lighting Designer for the 2014 Acura booth, which featured 138 of Martin’s MAC Aura Wash lights. The booth featured two suspended rings that twist throughout the entire space; one made of silver and the other wood to represent man and machine. Wojcieszyn explained:
“At a previous show we used the Viper DXs to wash over the rings but it proved to be a bit too strong, which is really a credit to the design of the fixtures. I switched to the MAC Auras for the Detroit show and I was able to mix the color effectively and really get the warmth I was looking for out of the rings.”

Nissan
Principal lighting design for the Nissan booth was developed by Chris Medvitz of Lightswitch and included 52 Martin Viper Wash DX fixtures to light the key vehicles for press events and reveals. Additionally, Medvitz used 90 Martin MAC 2000 Wash XBs to light the booth’s signature architectural feature or ‘halo’. Medvitz explained:
“As an elliptical cantilevered sculptural element dominating the booth, the ‘halo’ was animated with light to enhance and extend the audience experience of the audio/visual content from a giant curved LED video screen also featured on the booth. The MAC 2000 fixtures were configured with buxom lenses as the throw was only a few feet away, but the bright light paired with the Martin color mixing system bathed the ‘halo’ in a vibrant and robust ‘Nissan Red’ when not animated.”

Infiniti
Medvitz was also the principal lighting designer behind the 2014 Infiniti booth where he deployed 10 Martin Viper Wash DXs and 84 of Martin’s MAC Aura fixtures to provide light for VIP lounges, highlight corporate logos, add color and movement to the press event, and even light a DJ featured on the booth. Additionally, Medvitz used 24 MAC Auras on a circular truss to light the new Infiniti Q50 Eau Rogue concept car. Medvitz commented:
“The Auras created an extremely smooth and soft wash for the concept vehicle that allowed us to fine tune color and color temperature to make the red paint on the vehicle appear the way our clients wanted both on camera and in person.”

Commenting on his choice of the Viper Wash DXs for the Nissan and Infiniti booths, Medvitz said:
“I’m a big fan of the Viper DX! They have great output but don’t have the excessive weight or size of other wash fixtures. The beam shaping feature on the DX allowed us to more precisely light the vehicles for camera–the ability to shape the light on the cars and control spill proved to be an invaluable asset.”

Ford and Lincoln
Lighting Designer Jonny Milmer of Imagination used 166 Martin Professional MAC Aura, 12 MAC 700 Wash and four MAC III fixtures for lighting of the feature vehicles on both the Ford and Lincoln booths. For Ford, Milmer used the MAC Aura to light both the featured vehicles and the key interactive display due to its light weight, speed and light versatility. Milmer explained:
“We needed a fitting that could match the daylight lamp from the Static Daylight Pars while creating full color sequences to help tell the design and production story.”

For the Lincoln booth, Milmer chose the MAC Auras to light the feature vehicle on the center revolve stage due to its clarity and the consistent color temperature it produces. Milmer added:
“Our clients take the car colors very seriously and the color of the lighting is a crucial part of getting the color of the car right for the designers. For us, the Martin MAC Aura is the only fitting that allows us the consistency of color that enables us to match the colors we need perfectly every time without creating colored reflections.”

Milmer also used Martin’s MAC III for gobo projection to create interesting animation and morphing effects across the booths. Additionally, Martin’s MAC 700 Wash lights were deployed to help light the Mustang display area that consisted of a large interactive presentation.
“We simply used the MAC 700s to provide a bit more punch and drama in this area of the booth,” stated Milmer. “These fixtures are very compact for their output and they were able to fit comfortably on our custom truss,” Milmer said.

Volvo
Developed by Robert Cangemi, Principle Lighting Designer of Cangemi Design, the lighting design for Volvo’s 2014 NAIAS booth featured 72 of Martin Professional’s MAC Auras, 16 MAC III Performances, and 12 MAC Vipers. As a crucial element of the design, Cangemi relied on Martin’s MAC Aura to match the color temperatures of the daylight Par fixtures used on the cars and ensure the feature vehicles sparkled. Cangemi stated:
“In my opinion the Auras are the single best LED moving light released in a long time. I always use them in color calibration mode which renders an amazing clean cool open white. Also, I can match other daylight products with a fraction of the weight and power while the zoom range and color mixing is incredible.”

Commenting on the reliability of Martin’s lighting fixtures, Cangemi said:
“Booth maintenance was a breeze as the fixture worked and continued to work despite the harsh environment of a trade show that required continuous lighting for upwards of 14 hours a day. Whether in the same static position, running a slow moving effect continuously, the Martin fixtures did not let us down.”