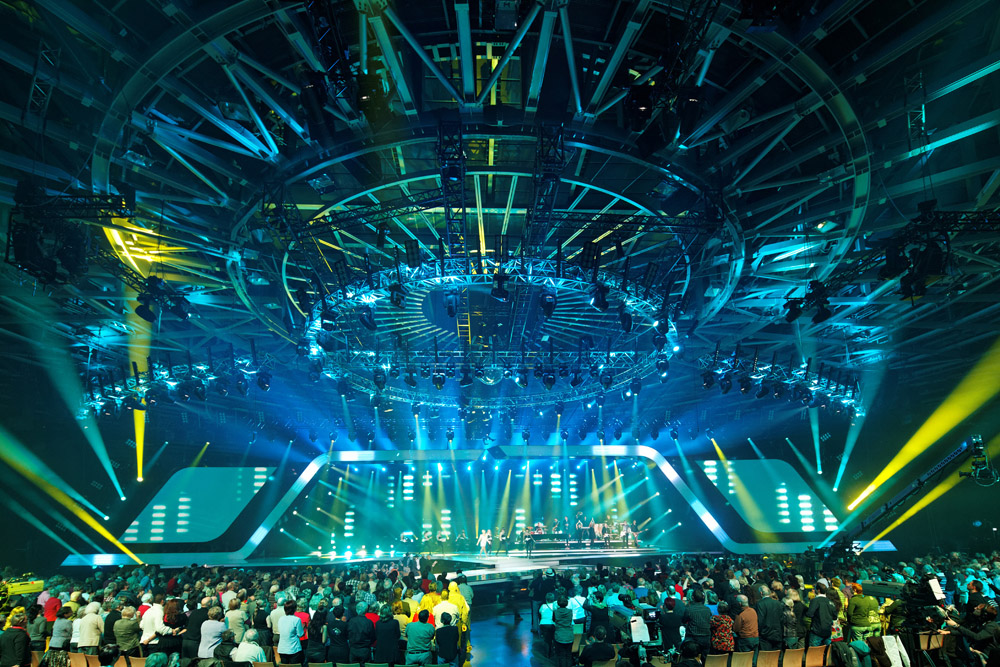 Popular German entertainer Helene Fischer played a pair of shows at the Berlin Velodrom in mid-December with lighting designer Jerry Appelt incorporating a host of Martin MAC luminaires into his design, including the new MAC III AirFX, along with visually stunning set elements like large movable “doors“ constructed of Martin LC Plus Series video panels.

„The MAC III AirFX has a real dominant beam, it’s nice and bright,“ Jerry said of the 1500-watt moving head fixture. „We used them as an add-on option for lighting looks really, working with a lot of MAC Auras.

„The MAC III AirFX were powerful and quite reliable. We used them on these shows only for mid-air effects but I look forward to also using them as a beam and wash luminaire on other shows.“

The MAC III AirFX is a new concept of lighting fixture that combines hard-edge, mid-air effects and a wash field in one. Its unique optical system allows it to adjust from a tight beam to a wash instantly.

Jerry had them placed in diagonal side trusses for side projection with more fixtures placed on the downstage edge projecting over the audience. The MAC III AirFX houses an aerial effects wheel with four gobo designs, stock gobos which Jerry took advantage of throughout the show. „They’re very nice gobos,“ he says. „It was nice that it wasn’t necessary to make our own!“

Super bright at nearly 60,000 lumens, the MAC III AirFX is also powerful enough to cut through light from bright LED screens, of which there were many on the Helene Fischer shows.

Besides a large, upstage LED backdrop, an integral part of the set design were two large movable LED side walls, or„doors,“ made up of Martin LC Plus Series LED panels. Each door was 6 meters high by approximately 16 meters wide, huge LED wings that could move in and out.

The modular LC panels make it possible to more flexibly integrate light, video and set design and offer key advantages over other types of LED panels such as greater brightness, superb color and brightness uniformity, and easy set up.

„Another advantage of using the LC Series is their low weight,“ Jerry says of the panels, which weigh only 11 kg per square meter. Running live images and graphical content onto the LED doors were Maxedias™, Martin’s user-friendly media server for media composing and playback.