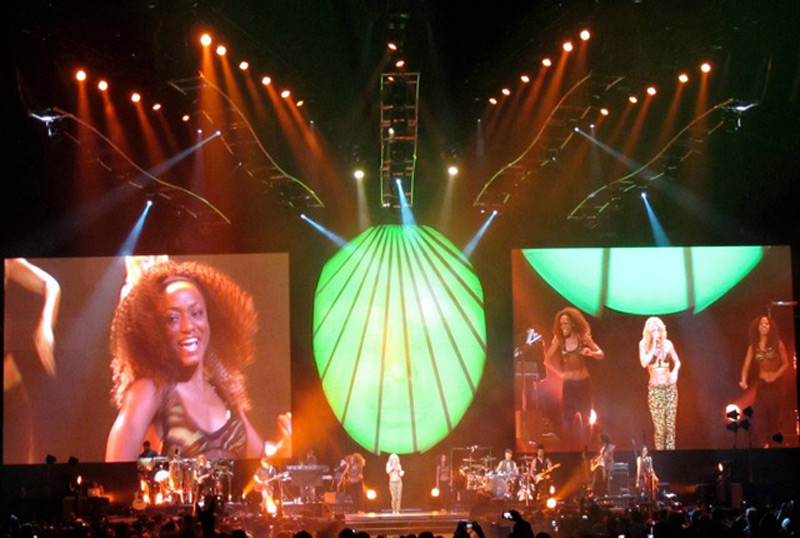 Shakira Sings, Shakes and Seduces Beneath All Martin Rig

How many men can claim to have been sought after by Colombian music and dance sensation Shakira?

Such is the case with lighting designer Paul Normandale.

“She saw a Depeche Mode show that I had done and tracked me down. Her management contacted me and we met,” he says of their initial contact.

The Grammy-award winning singer asked Normandale to create the lighting design for her current
“The Sun Comes Out World Tour” and he was happy to oblige. Touring in support of her two most recent albums, in addition to performing a string of older hits, the tour hit the US in the fall with a European leg running through December.

“We did a six week run in the States with no major issues, and thus far in Europe they are fine too,” Normandale states. Lighting vendor for the US leg was Upstaging with Lite Alternative, Normandales’s UK based lighting production company, handling the European leg.

Normandale, who field-tested the MAC III Profile over two years ago on a James Blunt tour and is also using them on the current Chemical Brothers world tour, is still happy with his choice. “The MAC IIIs have a broad zoom and beam extremity, allowing for both expansive and defined beams. We even used the laser trick and convinced everyone but the tour accountants we had lasers!” the LD exclaimed.

Capable of punching out over 33,000 lumens of power with a unique fat beam look, the MAC III Profile also features an 11.5 to 55 degree zoom range that zooms to full in a second, as well as a host of other innovative features. For the Shakira show, Normandale has the fixtures placed furthest upstage and downstage on a rig that is in essence five fingers with Kinesy truss waves beneath.