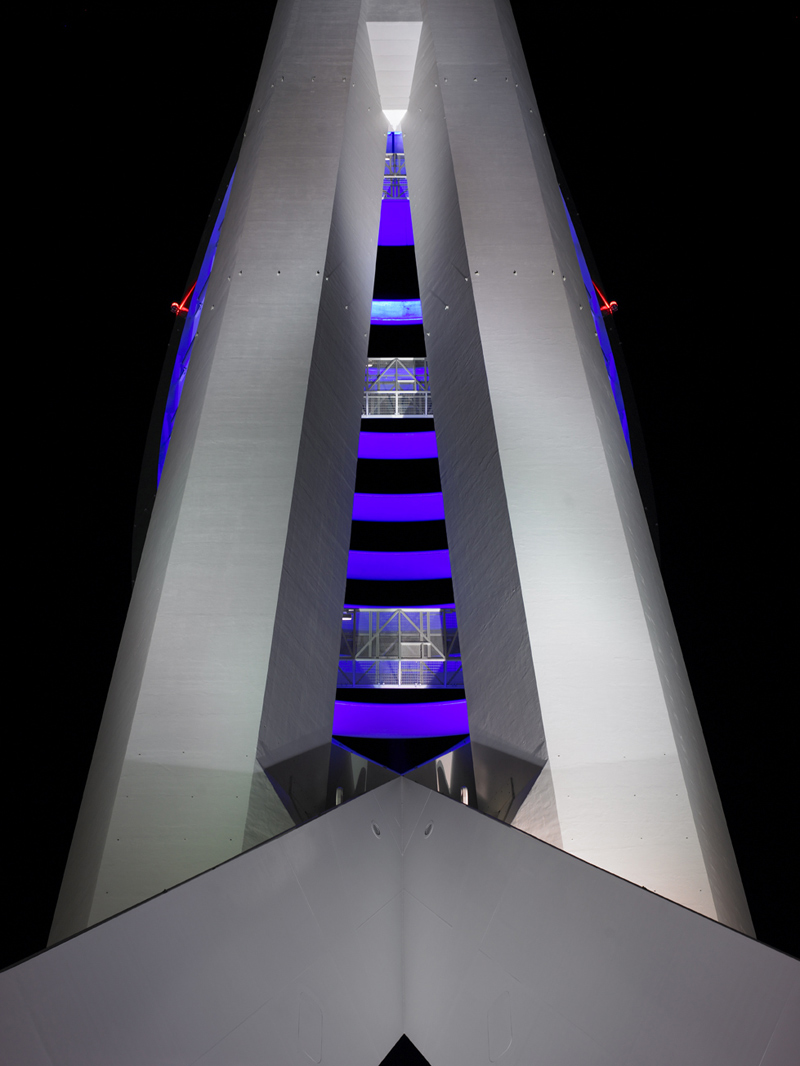 Spinnaker Tower is a new national icon based on England’s south coast. Soaring 170m above Portsmouth Harbour, the seamark is the UK’s tallest publicly accessible building outside of London and offers visitors a unique ‘window on the sea’ from its 100m, 105m and 110m observation decks. It is tall, elegant and sculptural in design with two large white sweeping arcs that give the tower its distinctive spinnaker sail design.

The tower is a UK Millennium Commission sponsored project in conjunction with Portsmouth City Council [PCC], which aims to transform the waterfront at Portsmouth and Gosport. Forming the focal point of the Portsmouth Harbour Renaissance Project, the tower is expected to attract thousands of visitors to the area every year and will provide a shining beacon of light to vessels destined for the harbour.

Distinct lighting elements
As the main contractor for the design/build construction, Mowlem plc engaged Mark Hensman of Equation Lighting to create the tower’s unique exterior lighting design which features two distinct elements. Firstly, the white light projected onto the rear concrete legs and the lower shaft below the cruciform to the front; and secondly, dynamic Martin Architectural colored light projected within the arcs and to the front of the main spire.

Following a competitive tender, A.C. Lighting’s Special Projects Division were awarded the contract to supply, terminate and commission all Martin exterior color changing architectural lighting fixtures that had been specified by Equation as part of their design. The company assisted the electrical contractor, Mowlem Engineering, in specifying the show lighting and architectural control systems, then supplied, programmed and commissioned the two systems.

Martin Exterior series
Some 28 Martin Architectural Exterior 600 color changing washlights were installed at various positions around the tower to uplight the front and top of the spire. A further 22 Martin Exterior 200 color changing short throw washlights provide side fill illumination of the arc inner ribs and three viewing decks. LED fixtures have been installed inside the viewing deck rooms to provide a low level representation of the exterior show lighting. In addition, white light is projected on to the rear concrete legs and lower shaft.

Selectable shows
The external show lighting system responds to wind speed, tidal and time information and a lighting playback controller distributes control via a DMX system to re-create six show designs. The six selectable shows have been programmed to automatically start at 30 minutes after sunset every day or when selected manually.

In addition to straightforward shows which turn all fixtures outside the building to static blue or white, a ‘Time’ show changes the coloring of the tower over 125 minutes through 5 minute intervals. Starting from blue and fading up the tower through red and finally into yellow, upon completion of the sequence the tower fades back to blue and starts again.

For the more complex ‘Wind’ show, an anemometer feeds wind speed data into the lighting system, which then outputs MIDI show commands to the playback controller. The controller then alters the color of the lighting relative to the wind from blue (at no wind), through green, yellow, orange and finally to red.

For the final show, A.C. Lighting programmed the system with tidal information to enable the controller to fade the tower from blue at low tide to red at high tide, and then back to blue again.