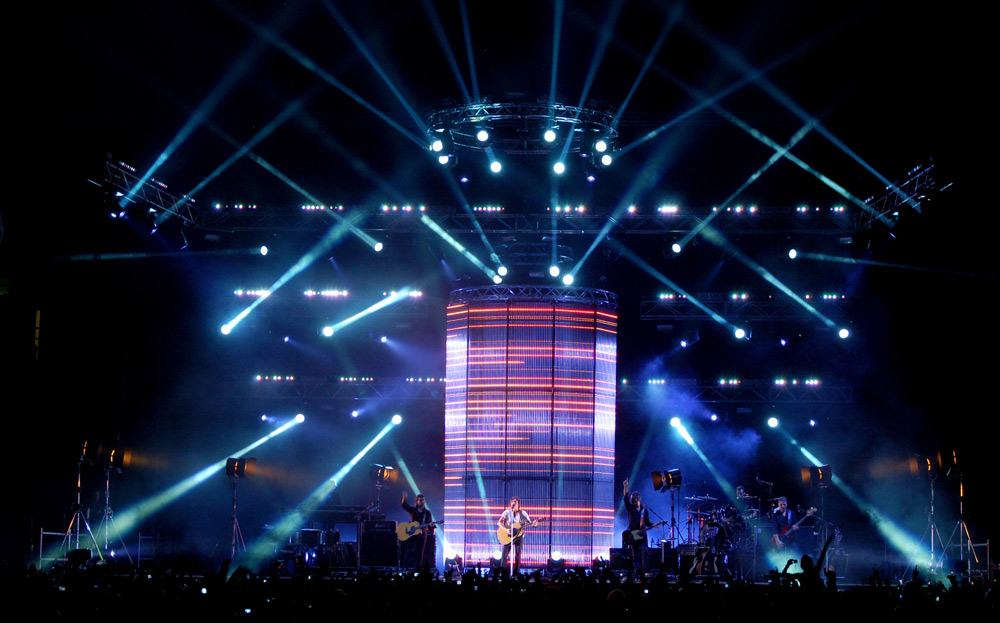 This past fall, Italian singer-songwriter and rock musician Gianna Nannini was out on her 15 date “GiannaDream Tour” with lighting and set design by Mamo Pozzoli.

Mamo incorporated a highly unique and visually stunning cylindrical LED screen made up of Martin LC Series LED panels into the design. He explains his decision to use the LC panels, “I needed LED panels with a medium pitch between 30 and 60mm to ensure intelligibility and transparency simultaneously. Rental company Giochi di Luce offered me the LC Series so I took the opportunity to test them in combination with Martin’s Maxedia media server and Maxxyz lighting console.”

The LC panels formed an arcing 6 meter wide by 4 meter high cylindrical structure positioned at center stage, the visual centerpiece of the set.

“With both concave and convex sides facing the audience, in practice we achieved two superimposed screens,” says Mamo. “The configuration produced three-dimensional effects with attractive overlays and unusual perspectives due to the specific geometry of the object. The cylinder was open at the sides, which allowed the artist to perform inside, interacting with the images.”

Mamo says that the LC Series’ 40 mm pitch is the best to obtain the type of effect and calls the 1 x 2 meter dimensions of the panels “very smart” and “easy to set up and robust to take on tour.”

Mamo was surprised by the brightness and color characteristics of the panels. “We even had to reduce their power in order to not be misaligned with the lights,” he says. “The reliability and speed of response of the whole control system - the media server to the console - was also excellent. In general, the LC series has proved an excellent choice. I easily obtained what I had in my mind.” Mamo also used Martin MAC 700 Washes on the tour as well as Atomic 3000 strobes which he calls “indispensable.”

The only graphics used were generated entirely by a Maxedia Broadcast media server which worked well with the screen’s resolution and transparency of the panels, reports Mamo. Video programmer/operator for the tour, Cristiano Blandin Savoia, used a Martin Maxxyz console linked to the Maxedia.

“Thanks to its proprietary user interface and video engine, the Maxedia Broadcast is a powerful tool to compose or manipulate video in real time with really advanced creative possibilities,” Cristiano comments. “The Maxxyz Compact is the perfect interface to improve the control of the Maxedia (responsiveness, on-the-fly inserts) and to time/program the cues with great efficiency, all thanks to its physical layout and software interface, which are coherent with Maxedia.

“Maxedia and Maxxyz permitted a high level of creativity and control possibilities as required in a high profile rock show and proved to be absolutely reliable during the tour. I appreciate the perfect integration between the two machines.”

Cristiano thanks Martin Italy for their support and especially Matthias Burger from Martin Germany who made it possible for him to drive the show completely via the Maxxyz Compact with little training.