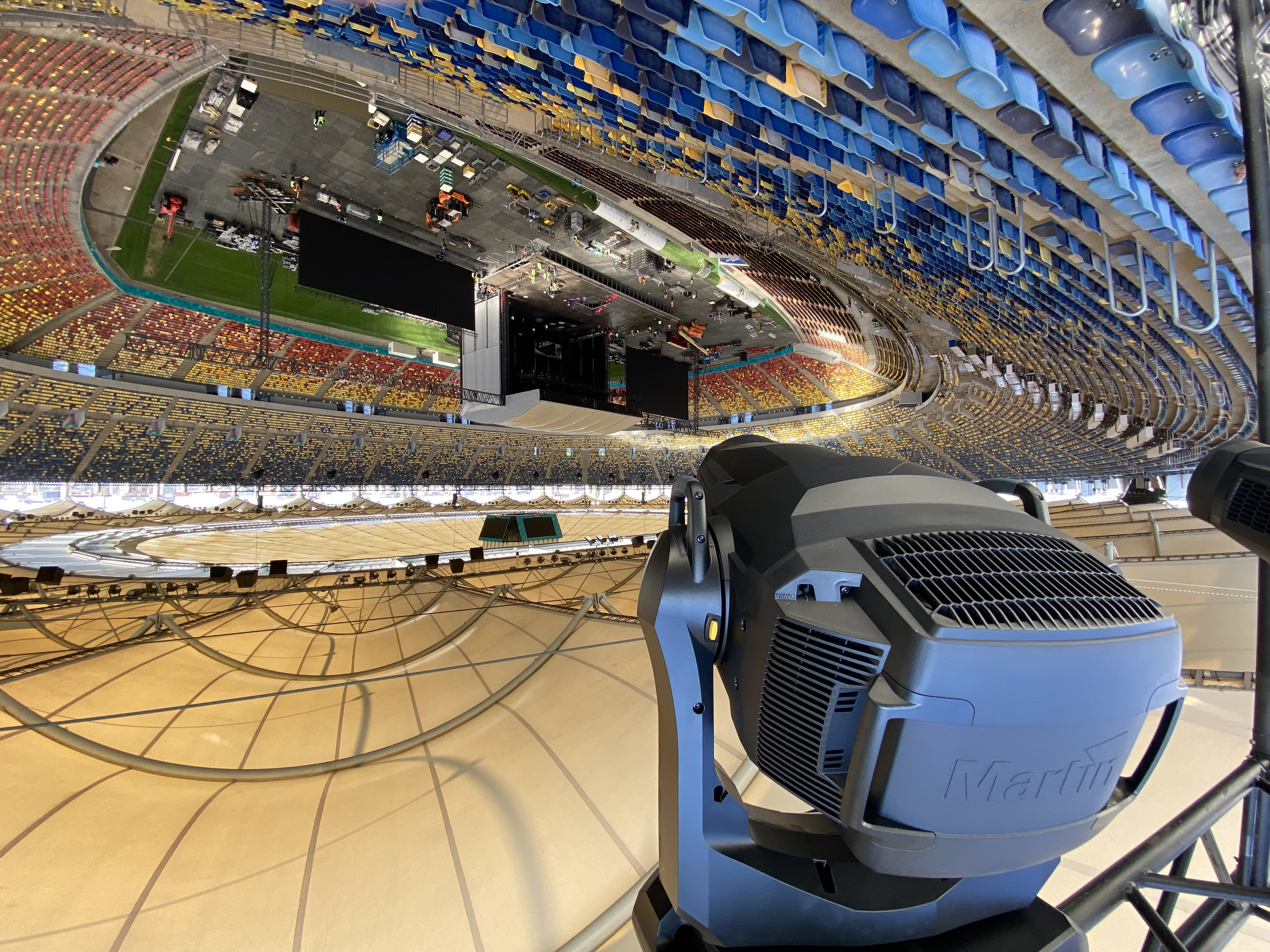 The International is a major annual championship tournament dedicated to Dota 2, a popular multiplayer online arena battle arena (MOBA) video game from developer and publisher Valve. Since its inaugural event in 2011, Valve has hosted The International every year (with the exception of 2020, due to COVID-19) in global cities as diverse as Shanghai, Vancouver and Seattle. Originally scheduled to be held in Stockholm’s Avicii Arena, the 2021 championship had to be relocated to Bucharest’s National Stadium on short notice when it became clear that many of The International’s players wouldn’t be allowed to enter Sweden due to visa reasons.

In order to ensure a smooth transition from the previous plan to the event’s new venue, The International’s longtime lighting designer Alex worked closely with Christie Lites and THiNC Worldwide to design and deploy a massive lighting rig that would not only deliver eye-catching visual designs and concert-inspired effects sequences, but also provide adequate broadcast lighting in a challenging daylight situation. To overcome these challenges, Berry opted to build the rig around brand-new Martin MAC Ultra Performance fixtures for their unmatched brightness and versatile effect beams.

“We had a design completed and ready for Stockholm 2020, but that didn’t happen because of the pandemic,” said Berry. “In 2021 we started planning to do the show in Sweden again, but we found out that there was no way that Sweden was going to give visas for the players to come in. We had to find a country that was going to allow us in. We ended up at Bucharest’s National Stadium, which is an outdoor arena. Because of the venue change, we needed a game plan to convert the lighting rig from an indoor show to an outdoor show.”

The move from Stockholm’s indoor Avicii Arena to Bucharest’s outdoor National Stadium presented certain challenges to the production. The lack of overhead rigging options forced Berry and the THiNC team to deploy key fixtures in the highest points of the stadium’s seating areas, resulting in an unusually long throw distance of 100 meters. The lack of an overhead roof also meant that Berry’s lighting rig would have to compete with natural sunlight.

“For indoor shows, we usually need the lights to operate in the 80 foot-candle range,” Berry explained. “Since we were in a daylight situation, I needed to provide lighting in the 250 to 300 foot-candle range. Because we were in an outdoor stadium, there weren’t a lot of options for rigging lights overhead. We ended up with two rows of arches in the very top of the 300-level seating with a 100-meter throw to the stage. Luckily, the MAC Ultra Performance is unbelievably bright and handled the throw distance beautifully. With a throw distance that long in a daylight situation, there’s no way we could have gotten the brightness we needed with any other fixture. It was the savior of the day.”

“Because of the nature of the show, lighting an Esports event is sort of a balancing act between providing ‘in-your-face’ concert-style flashing lights and ensuring neutral corporate-style key lighting for the video cameras,” continued Berry. “The back light was equally important because the camera operators were doing a lot of 360-degree moves around the players. We also used the MAC Ultras for low eye fills and back lights, which was fun because I could do a gobo wash over the entire stage when the area wasn’t on. Then the fixtures could brighten up really quickly when we needed video light. We also used the built-in frost feature to kill out the gobos. It worked really well and got clean video-level lighting.”

Berry has been successfully using Martin lighting fixtures since the beginning of his 30-year career in lighting and scenic production. For this reason, he was excited to be one of the first lighting designers to incorporate the brand-new Martin MAC Ultra Performance fixtures into a show.

“I’ve been using Martin gear as video-level lighting for more than 20 years,” related Berry. “I just knew the MAC Ultra Performance was going to be really great. My programmer Darien Coop had one shipped to us during pre-programming and we played with it to see what it could do. A few fixtures come close, but nothing can actually touch it in terms of brightness and zoom capabilities. It’s also super quiet, which makes me look forward to using them in a theater environment. I will definitely be requesting and specifying MAC Ultra Performance fixtures in the future from here on out!”

Being the first to use a new fixture can come with its own set of challenges, including supply issues. Thanks to his longstanding relationship with iconic distributor Christie Lites, Berry was able to receive the needed quantity of MAC Ultra Performance fixtures in time for the show.

“I would also like to say thanks to the strong partnership between Christie Lites and Martin, who were able to overcome all the supply chain challenges and deliver the needed quantity of fixtures during some very challenging times,” concluded Berry. “And my team at THiNC Worldwide also overcame all the challenges of working on an event of this magnitude during a worldwide pandemic and knocked it out of the park!”