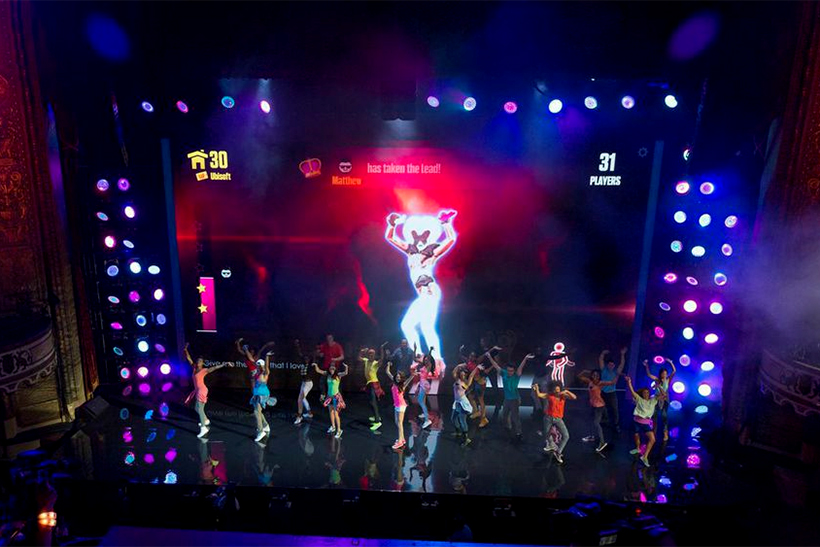 Ubisoft Event at E3 made brighter by Martin lights

E3, the world’s premier trade show for computer and video games, provides groundbreaking new technologies to over tens of thousands of professionals. Held at the Los Angeles Convention Center in June, this event has representatives from over 100 countries. This year, Martin Professional helped bring the Ubisoft event to life providing premier lighting for the introduction of this years newest games, including Assassins Creed French Revolution.

Chris Collins, Yeager Design, along with Elizabeth Harper, E. Harper Design, described the amount of work that went into finding the appropriate lighting for the event, including the creation of a waving French flag from Martin lights. One of the biggest challenges was finding lighting that not only added to the stage but also looked good on camera. Harper said:
“Making sure it looks good for the camera is huge. Your live audience is only a fraction of who is actually watching the event. Branding is one of the biggest aspects of these events so finding the correct color range to match the brands that show up on camera is equally important”

Finding the right lights for an event of this caliber to fit both the live event and the broadcasting took some work, but Martin was able to provide just the right equipment, Collins said:
“We’re starting to phase out the MAC 2k washes, the Viper Wash and Profile are filling those roles for the next generation. The MAC 2k was our go to fixture prior to the Viper line as it offered a nice field for camera, as well as the shuttering mechanism in a reasonable size fixture. The Viper line is a nice improvement and it’s timing is great for taking over from the MAC 2k line.”

The Vipers that were used for the Ubisoft event have a great range of optics, whether it’s for texturing a site or a short throw or even lighting a piece of scenery. Collins explained:
“The Viper is a reasonably sized fixture and it’s been really great. Our camera guy loved the Auras. If you just have scoop for house lights nobody wants to see them. But the Auras gave the TV/web audience a better sense of how many people were there and all the excitement surrounding the event.”

When asked if there were any big obstacles around the lighting, Harper replied:
“No real challenges that the gear impacted. Overall everyone was very happy with the variety of looks for the show. With the Quantum’s negative space around it, it could have been easy for the LED screen to overwhelm everything. But we actually had to dial the Quantums back to get a nice balance. The event was a big success both live and broadcasted, thanks to the versatility of Martins products.”