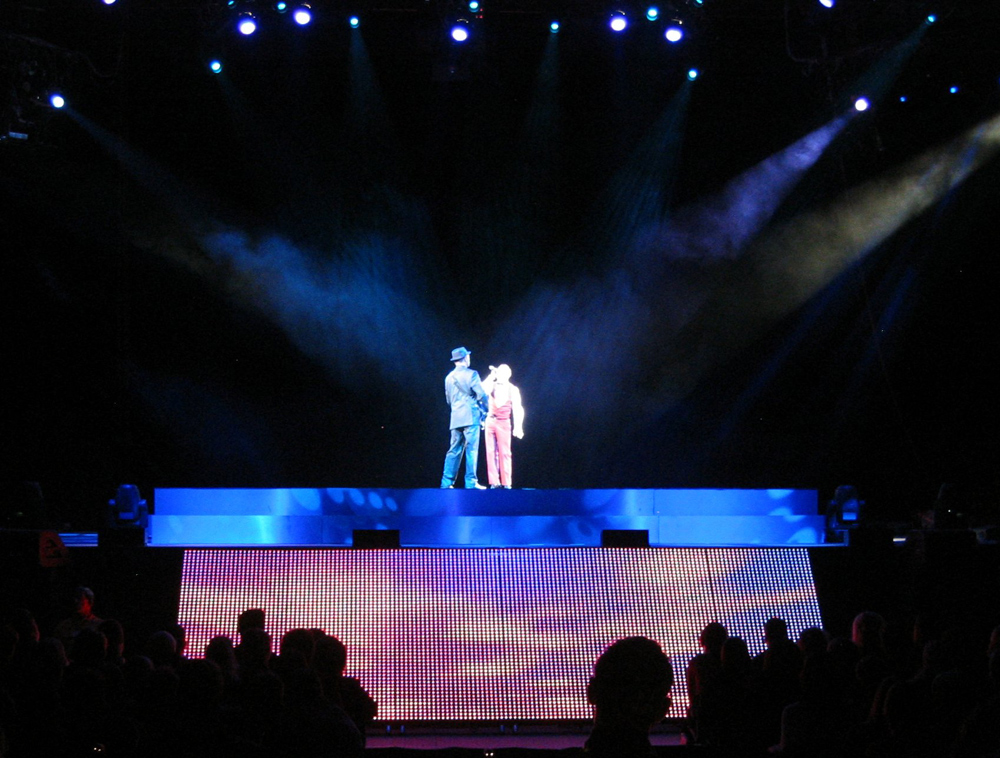 Australian band Human Nature has just finished their “Dancing in the Street” arena tour using Martin LC Series LED panels. Directed by Dein Perry, the task of lighting the production and designing the set was given to his long-time lighting associate Gavin Norris, an Englishman now based in Sydney. This is the first time that Gavin has had to design in-the-round, although he has worked on many such productions in the past.

“Obviously it’s a lot more difficult than doing an end on show,” he confided. “One of the most important rules is to make sure everyone in the audience always has a decent view as opposed to sometimes blocking somebody off to one side. It’s hard but good fun.”

LC Series
Gavin knew early on in the design process that he wanted to use LED screens in his design. “As the show was going to be in-the-round I didn’t want people to be looking at the performers legs and then have to tip their heads back to look at screens which would have to be quite high due to the in-the-round design; if you have the screens low they would block people’s view,” Gavin said. “The idea that I had was to pitch them at the front of the stage so that the audience always has them in their peripheral view, even when they’re looking at the performers. It means people don’t have to turn their heads away from the action and the screens are not a distraction. I needed something that was low resolution, easy to put together, didn’t weigh a ton to put in and was also relatively cheap to hire.”

Fortunately for Gavin, this all happened about the same time that Chameleon Touring Systems took delivery of the new Martin LC LED panels - supplied through Martin’s Australian representative, Show Technology.

“I did a demo at Chameleon and from that point on that was what I was going to use!” Gavin declared. “I think the Martin LC panels are stunning. Pitched at an angle meant that even when you were on the floor looking straight at them, because of the pitch, the pixels were closer together so the image was easier to recognize. And the audience sitting in the bleachers got a great view. It’s a good, decent product that you can do a lot with, even lighting through them which I’m looking forward to doing in the future. Really their biggest selling point is how little they weigh. I’ll be interested to see how they work on television - should be pretty good.”

Maxedia Motown
Gavin used the Martin Maxedia as his media server with Jamie Centofanti doing the programming. “The way that the Maxedia is laid out meant that Jamie could program it song by song for me whilst I was lighting the main gig,” said Gavin. “It meant that once we had everything how we wanted it, it was just a case of me accessing that cue on the cue list of my [lighting desk]. It saved me days of programming.” Images included a lot of square, graphical images typical of the Motown era as well as general old style Motown images which was done tastefully so as not to change the show into a musical review.

Lighting brief
“The brief was that everyone always had a good, clean view of the four guys which we managed to do quite well,” added Gavin. The lighting rig included 8 Martin MAC 700 Profiles, 16 MAC 2000 Profiles, 8 Martin Atomic 3000 strobes, other automateds, 16 x 8 light Moles DWE, 8 Med Throw Starklite follow spots (truss mounted) and other LED.

The lighting rig was shaped like a set of barn doors open on a Fresnel; the front part of which was driven on a Kinesys motor control so that Gavin could constantly change the shape of the rig. “I could drop the trusses so that they framed inwards with the fronts pitched all the way down resulting in dramatically changed lighting for the audience,” he explained. “A lot of what they’re looking at is now pointing at them. It also helped me capture the mood better; made it more personal for the slower numbers. The problem that you can sometimes have in the round is that you can lose people if it’s too big so it was good to be able to close things down a little bit.”

Custom hydraulic lift
Gavin designed a 4.8 meter circular hydraulic lift with a stage revolve which sank to allow performers and instruments to get on and off. The area around the stage revolve was stepped up a level so that performers could be up high when the lift was flush during most of the show. This provided different levels and meant that at the end, when the musicians came up through the middle, there was a lower area on which they could stand without blocking the singers. Above this central area was a 5.5m² two-stepped performance platform flown in during the show to cover the hole left in the stage when the lift was down. It also hid the musicians that appear on the lift towards the end of the show.

When the platform was in its raised position (approx 13m) it housed automated washlights which were used to confine top light on to the lift area for moments when the lighting needed to be pulled in tight. This lighting position was crucial to achieve the steepness required. The flown rostra weighed 2.5 tons and were flown on 4 x Kinesys 1T lift kits which gave it a millimeter precise landing on the top stage level and a variable travel in and out speed.