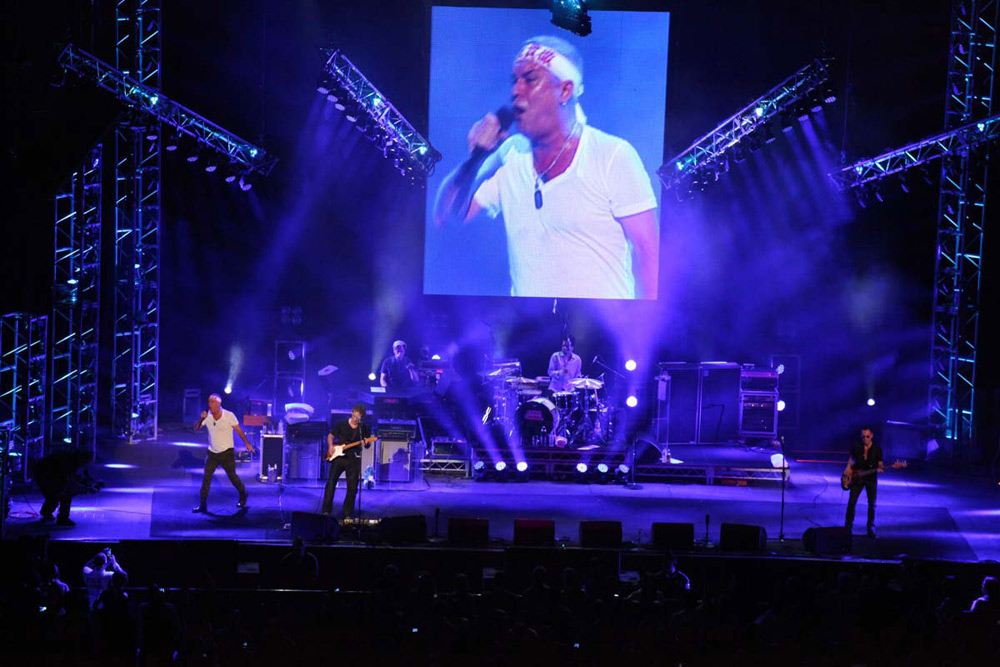 Described by Australian press as "everything a rock show should be," iconic Australian band Cold Chisel’s "Light the Nitro" tour is playing dates across the country with lighting design by Francesco Calvi.

Because the tour is playing such a variety of venues - from large scale arenas to smaller amphitheaters, even circus tents - Calvi turned to Martin Professional’s compact MAC 101 wash light as the base fixture in a versatile lighting design.

Old school to new school
“We had serious weight restrictions in many venues, and truck space was also limited,” Calvi says. “Because the 101s are so light I was able to go with lots of them and keep the rig the same across all venues.”

Calvi uses 150 MAC 101s as the foundation of his design with fixtures on eight towers per side for cross lighting and on five finger trusses that move throughout the show, as well as on the floor.

“I like the look of the 101s. They give me an ‘old school’ look that suited this band,” Calvi says of Martin’s remarkably small color changer. “I am able to get a big PAR can look as well as a lot of great movement when needed.”

Calvi mentions the 101’s light weight, great output, good color and extremely quick movement as exceptional features. With regards to the fixture’s ruggedness, he says, “We have subjected them to every climate possible and they have performed every night.”

“This was my first use of the Martin M1 and it has been a real surprise for me,” Calvi says of the easy-to-learn desk. “It has proven to be a very powerful console.”

Calvi runs eight streams of DMX for the lighting via Artnet and two streams of Artnet for the media server. “We are running over 200 fixtures and it’s been very easy to get around. It is a simple desk to learn and like all things, I am still learning as we go.

“I love the way it handles effects; many of the things that I have been wanting over the years, it does well. The layout of the console is great too and it’s surprising how much playback is actually available to the operator. I think I will be playing with the M1 for many years to come.”

Other Martin gear used on the show is MAC 2000 Profiles™ and MAC TW1™ tungsten wash lights.

Lighting supply for the tour is by Chameleon Touring Systems who source their Martin gear from Martin distributor Show Technology. “As well as local supplier Chameleon doing a great job, special mention should go to Show Technology. They are always supportive of any event I work on, without fail.”

Ticket sales for the 10-week "Light the Nitro" tour, the band’s biggest in 30 years, sold out in under a day.