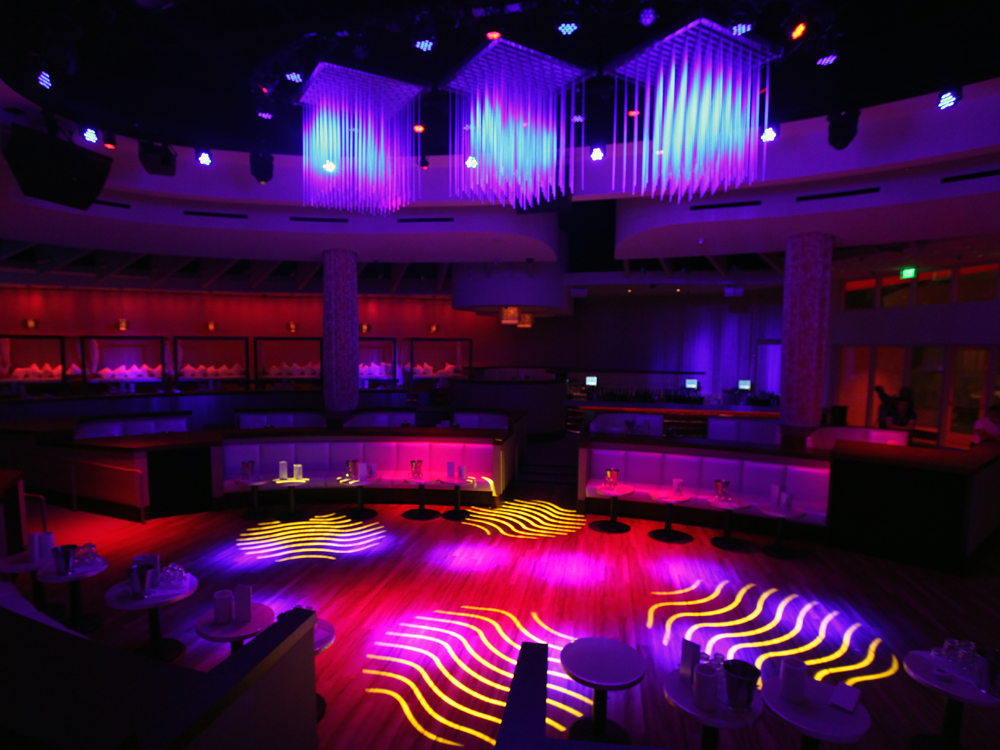 4Wall Hits the Beach: Club Nikki at the Tropicana in Las Vegas

The Nikki Beach organization wanted to bring the best of their South Beach, Marbella, and St. Tropez-inspired designs to the dual attractions at the newly-renovated Tropicana Las Vegas. They include Nikki Beach Club, occupying four acres of the resort’s pool area, and Club Nikki, a 15,000 square foot nightclub.

For Club Nikki, Tropicana and Nikki Beach execs set out to create what they hoped would become “the sexiest dance floor on the Vegas Strip.” 4Wall was originally contracted to handle the dimming and control integration. As the project progressed, 4Wall’s role expanded — they would be designing the lighting for the dance floor as well.

John Fernandez, 4Wall Systems project manager, has been with the company since it first opened its doors in 1999. 4Wall has worked on quite a few clubs in Las Vegas including the Chateau, the Marquee, “and quite a few others who have since changed names,” Fernandez laughs, noting the fluid nature of the business.

Victor Sutter, GM of the club, provided 4Wall with drawings of the dance floor area, and the only instructions were to reinforce with the “South Beach” feel that is the organization’s theme. The owners were much happier with what 4Wall came up with — much more so than the original company, and awarded them the gig. Shaun Ballew was the programmer.

“The hardest part was getting all these parts to talk to each other,” Fernandez says. “We ended up using nine universes of DMX to make it work. When you’re working with multiple fixtures that are all DMX, there are small differences between the varieties of brands of product. We were able to work through it, though.”

Work on the project got heavy beginning in March with a grand opening on Memorial Day weekend looming. The soft opening was just a week before, and Fernandez, who has been spending pretty much every night at the club, says it was going well.

The oval-shaped dance floor occupies a good-sized area, about 30 by 50 feet, and, being Vegas, it needed a lot toys to coverage.

Most striking is the center, where the team hung three 3D LED chandeliers that came from China-based Seekway Technology Ltd. “These are basically four-foot by five-foot cubes,” Fernandez says, noting the immersive, 3D visual effect of the technology, which is only about three years old.

Dance floor-focused B-roll content flies across the cubes, adding to the energy level of the club. “They do letters, shapes — basically any 3D effect you can think of. For example, they put a 3D globe on the center one that looks like a mirror ball as two other cubes show waves or fireworks.”

Along with the cubes, 4Wall provided 24 Martin MAC 101s, six MAC 350 Entours, four Atomic 3000 Strobes and 20 Elation Opti Tri Par 30s. “These units are popular for a reason,” Fernandez says, of the MAC 101s, crediting their compact size and high output. The Elation Opti Tri Par 30s, meanwhile, were chosen for their color changing abilities, and a pair of Jem K1 hazers were thrown in for good measure. 4Wall also provided the system that controls gear provided by other vendors, including more than 250 feet of DMX-controlled, color-changing Lumenpulse LEDs, more than 50 DMX-controlled white LED downlight fixtures from GVA Lighting, and more than 20 color-changing, DMX-controlled LED fixtures from Renaissance Lighting.

The integration was the challenge. “Because everything in the venue, down to smallest architectural lights, were DMX controlled LED fixtures, we had to put an Ethernet system in to handle it all.” They opted for an HP TouchSmart All In One PC with Maxxyz PC software to keep it all under control. “We wanted to go with a PC-based system, and we already had so many Martin products, we went with theirs. It’s nice to stick with one vendor.”

DMX-wise, it was an evolving process.

“It started out as a small system comprised of only a couple DMX universes, but grew more complex every week as we worked out new lighting designs, fixtures and methods of control with ownership throughout the build of the project,” Fernandez says. “Although it was challenging, we kept up with the ever-changing whims and demands of, not only lighting design, but also integrating new system control methods and coordinating with the multiple electrical contractors to ensure the infrastructure made it into place where needed — all of this on the fly.”

“Pathport makes high quality, reliable devices and, as with ETC and Doug Fleenor, the factory support for their products is top-notch,” Fernandez says. “It’s always good to have that kind of insurance policy for system-critical components.” He also credits the Pathport Octo as a “very flexible device” when it comes to managing various Ethernet based DMX protocols. “It can easily be configured from the front panel to make any last-minute changes that happen during these installations. Its role in this system is routing the sACN and hard line DMX portion of the ETC architectural control equipment.”

Fernandez adds that the Doug Fleenor merger boxes are managing two of the DMX universes that are in use at this venue. Universes 1 and 2 on the A side of the merger boxes are inputs from a Lumenpulse Lumentouch controller. This was provided and programmed by Trizart Alliance out of Canada, which has a Las Vegas office, as a secondary user interface for all of the DMX-controlled, LED architectural lighting throughout the venue. “On Universes 1 and 2 of the B side of the mergers are outputs from the Maxxyz PC that allow the console operator to grab full control over the entire venue by a simple button-push” at the ETC Paradigm station,” he adds.